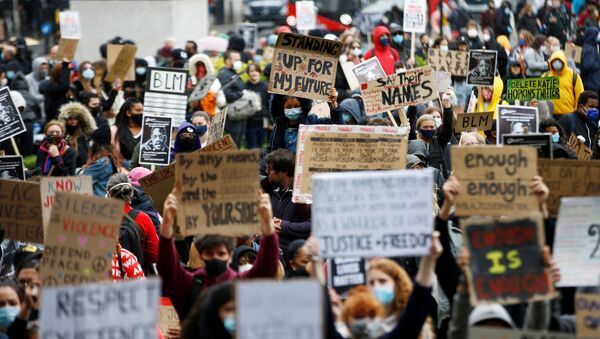 Subscribe
Mohamed Elmaazi
All materialsWrite to the author
Thousands of people are expected to gather in Parliament Square on Saturday in solidarity with anti-police brutality protests in the United States as well as to protest police violence and racism in the United Kingdom.

Yet another demonstration was organised by UK-based chapters of the Movement for Black Lives (Black Lives Matter) in Parliament Square, near the Houses of Commons. Thousands of men and women amassed with a myriad of signs ranging from 'Black Lives Matter' to 'End Police Brutality' and 'The UK is Not Innocent'.

Sputnik spoke to attendees and asked them why they chose to come to the protests amid the rain and the ongoing COVID-19 pandemic.

Table of contents
Banners Inside Vauxhall Train Station
It Looks as If the March is Coming to an End
Young Protester Gives His Reason for Joining the Demonstration
Protesters Cross the Vauxhall Bridge
Why Are Police Filming the Protest?
Drivers Show Their Support to Protesters
'No to Fake News About Our Peaceful Protest'
Demonstrators Make Their Way Towards US Embassy
People Observe the Protest From Their Rooftops
Anti-Racism Protester in London
What a Long Line of People!
Watch Women Chanting 'No Justice, No Peace' on Top of Bus Stop
The UK Has Its Own Record of People Who Died in Police Custody
'The Change Must Come', Protesters Chant
Protester Holds Banner Outside Department for Business, Energy, & Industrial Strategy
Some of the Protesters are Carrying Banners
US Citizen Takes Part in Anti-Racism Protest in London
Listen to What People are Chanting During Demonstration
Meet Some of the People Currently Taking Part in London Protest
Sputnik Correspondent Reports About 'Thousands' of Protesters in Parliament Square
Interview with Young Protester
Protesters are Weathering the Cold and Rain
London Sees Another Round of Protests Against Police Aggression
'It's Not Just a Problem in America' - Protester
Protester Says 'Today Enough is Really Enough'
'We are All Part of One Race - the Human Race' - Protester
People are Gathering for Black Lives Matter Protest in London
New firstOld first
15:45 GMT 06.06.2020
Banners Inside Vauxhall Train Station 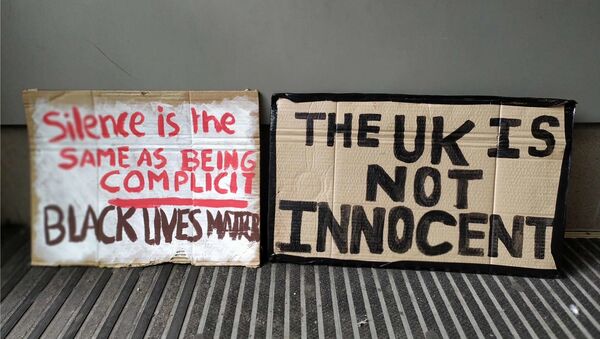 Although the march continues it is beginning to dissipate somewhat as protestors arrive Vauxhall. With many going into the underground station. Police presence has been noticeably subdued compared to previous demonstrations. #BLMLDN @SputnikInt #BlackLivesMatter pic.twitter.com/uL5CGlbkjJ 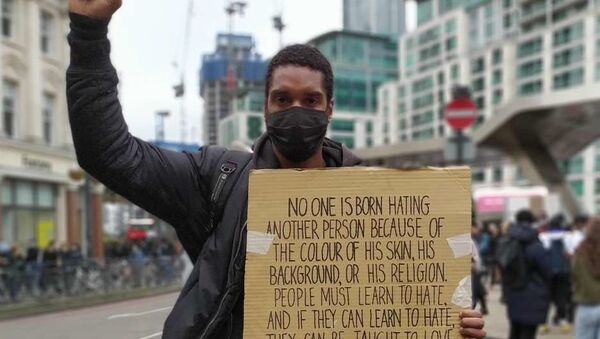 The march is crossing over Vauxhall Bridge with protestors now turning right at Vauxhall Bus Station, apparently headed towards the US Embassy in Battersea 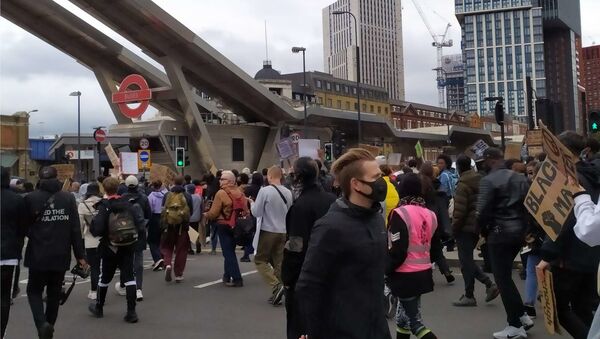 UPDATE: The police officers' response to the sputnik correspondent who questioned why they were filming protesters#SputnikUpdates #LDNBLM #BLM #BlackLivesMatter https://t.co/s09T8Mh3ib pic.twitter.com/wGSYQ3fXQh

Taxis and other cars pass by honking their horns in apparent support for #BlackLivesMattters demo as it goes onto Vauxhall Bridge, with MI6 headquarters in the horizon. @SputnikInt #BLMLDN pic.twitter.com/dkgVFio5fz

@NOFi, from London, says:
"We're specifically here to protect our people and protect our media. And not let any false information be let into the media about our peaceful protest." 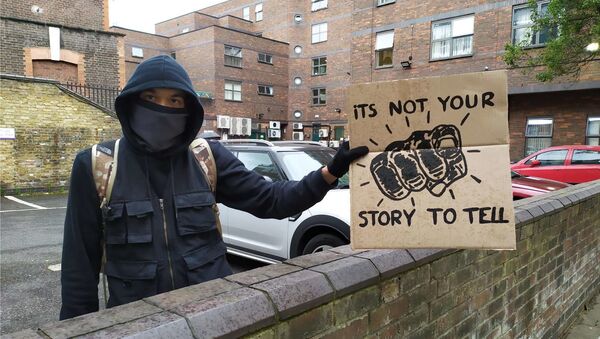 Demonstrators march past people's homes on Vauxhall Bridge Road as residents film and bang pots and pans in apparent support of the #BLM march.

March continues up Vauxhall Bridge towards US embassy 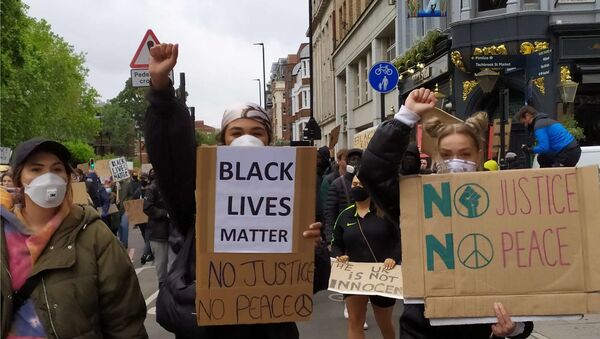 Now on Vauxhall Bridge Road observers can seen on their rooftops and balcony's filming and clapping and banging pots and pans as thousands of people march along.#LNDBLM #BLM #BlackLivesMatterUK #BlackLivesMatter @SputnikInt pic.twitter.com/FGpty1KDLJ

A woman holds a sign saying "racism is a weapon of mass destruction against Black lives" where Whitehall Bridge meets Rochester Row. 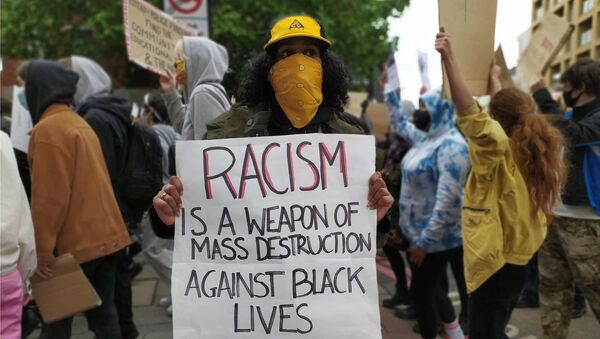 The #BLMLondon demo is so long it has snaked around from the bottom of Victoria Street onto Whitehall Bridge.@SputnikInt #BlackLivesMatter #LDNBLM pic.twitter.com/s8T7Hee39b

UPDATE: Two women chant "no justice no peace" as they stand on top of a bus stop and demonstrators march past#SputnikUpdates #LDNBLM #BLM #BlackLivesMatter https://t.co/s09T8Mh3ib pic.twitter.com/C2YO4w4aRY

A woman walks down Victoria Street with the names of some of the people who have died in police custody in the UK over the last 10 years written on a sheet on her back. 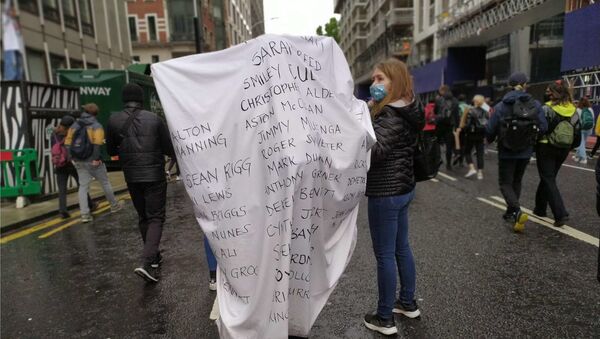 A crowd takes a knee as one person speaks to them and gives a prayer (as a Christian) call for change and saying they are going to make change. They changed "the change must come" once he finished speaking. #BlackLivesMatter #LDNBLM pic.twitter.com/JgxjyW186E 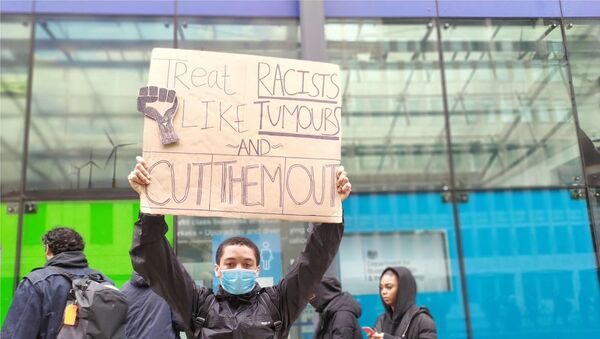 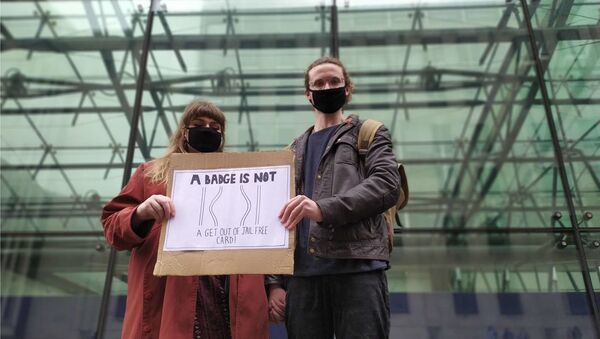 Brandon, 27, teaches in London but originally from Chicago, Illinois

"I'm here to show support. I wish I could be at home [in the US]. My family are really struggling right now. This is my way to show solidarity and show support for Black Lives Matter, and my community. [Racism and police violence is ] not just in the US, it's a problem worldwide, especially in the UK." 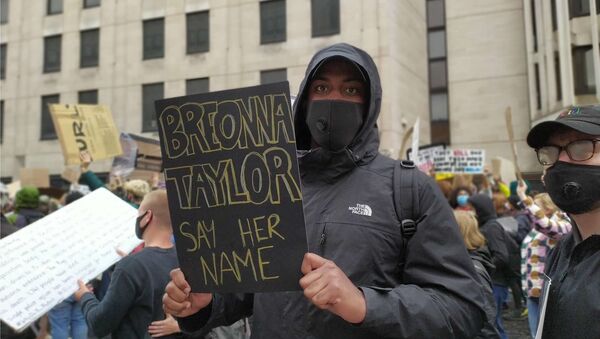 UPDATE: Peaceful demonstrators march and chant "No justice, no peace. No racist police" as they walk away from Parliament Square and towards Victoria #SputnikUpdates #LDNBLM #BLM #BlackLivesMatter https://t.co/s09T8Mh3ib pic.twitter.com/qo1PeAWe3p 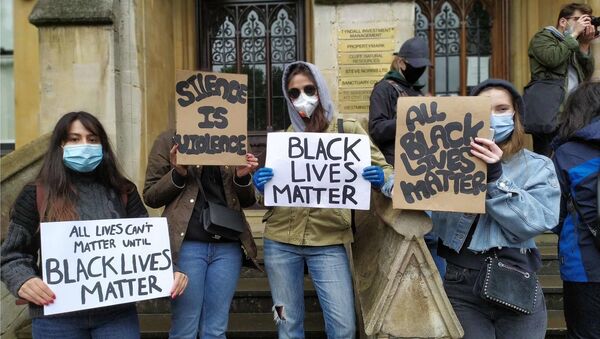 Literally thousands of peaceful demonstrators are now pouring out of parliament Square and walking towards Victoria as they should "no justice no peace!" #BlackLivesMatter #LDNBLM #BLM pic.twitter.com/2fqLchcxEQ

UPDATE: Kloida, 16, a student from west London, "It's not just in the US where racism and police violence are a problem"#SputnikUpdates #BLMLondon #BlackLivesMatter #BLM https://t.co/s09T8Mh3ib pic.twitter.com/2u14eXnPre

Sputnik correspondent at the scene: "People have decided to weather the cold, rain & wind to call out what they see as systemic state racism & violence"#SputnikUpdates #LDNBLM #BlackLivesMatter #BLM https://t.co/s09T8Mh3ib pic.twitter.com/yXQVqSb3Uj

Saul, 17, student from north London (second from the left)

"We're here for the same cause as anyone else. Injustice towards Black people. It's not just a problem on America. The crimes in the UK are less known to people internationally, and just because they're are of less severity they are still crimes regardless. Racism, violence towards Black people. I feel like people are still fighting for their freedom. That's what we want, our freedom and to co-exist peacefully and not be judge's by the colour of our skin" 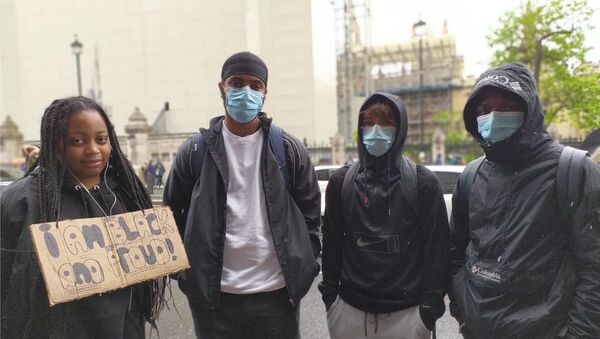 M, [on the right, who prefers not to give her name] a student from University of York, "I'm here because change will only happen if we all come together to make it happen. And today enough is really enough" 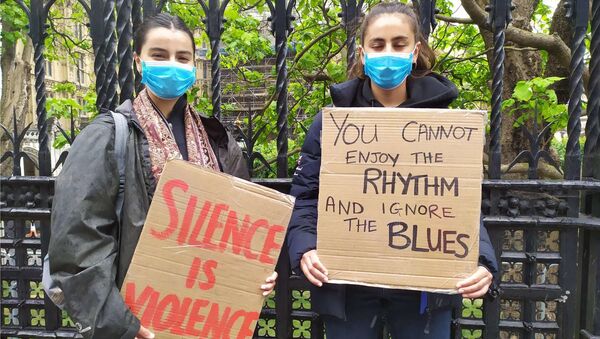 "I'm here to support the Black Lives Matter movement. Because we're all part of one race - the human race - and to give justice to George Floyd and to Black people around the world. The thing is this has been happening for centuries... I have been promoting anti-racism and [critiques] of police aggression on social media and feel that now is an opportunity to do more," Saif, 19, a student at University of Westminster, from South London. 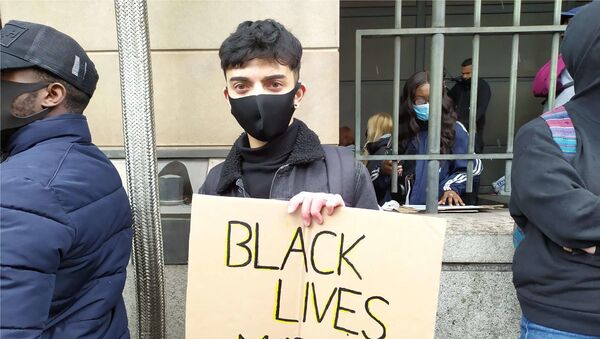 © Sputnik / Mohamed Elmaazi
11:56 GMT 06.06.2020
People are Gathering for Black Lives Matter Protest in London
Newsfeed
0
New firstOld first
loader
LIVE
Заголовок открываемого материала
Access to the chat has been blocked for violating the rules . You will be able to participate again through:∞. If you do not agree with the blocking, please use the feedback form
The discussion is closed. You can participate in the discussion within 24 hours after the publication of the article.
To participate in the discussion
log in or register
loader
Chats
Заголовок открываемого материала
Worldwide
InternationalEnglishEnglishMundoEspañolSpanish
Europe
DeutschlandDeutschGermanFranceFrançaisFrenchΕλλάδαΕλληνικάGreekItaliaItalianoItalianČeská republikaČeštinaCzechPolskaPolskiPolishСрбиjаСрпскиSerbianLatvijaLatviešuLatvianLietuvaLietuviųLithuanianMoldovaMoldoveneascăMoldavianБеларусьБеларускiBelarusian
Transcaucasia
ԱրմենիաՀայերենArmenianАҧсныАҧсышәалаAbkhazХуссар ИрыстонИронауОssetianსაქართველოქართულიGeorgianAzərbaycanАzərbaycancaAzerbaijani
Middle East
Sputnik عربيArabicArabicTürkiyeTürkçeTurkishSputnik ایرانPersianPersianSputnik افغانستانDariDari
Central Asia
ҚазақстанҚазақ тіліKazakhКыргызстанКыргызчаKyrgyzOʻzbekistonЎзбекчаUzbekТоҷикистонТоҷикӣTajik
East & Southeast Asia
Việt NamTiếng ViệtVietnamese日本日本語Japanese中国中文Chinese
South America
BrasilPortuguêsPortuguese