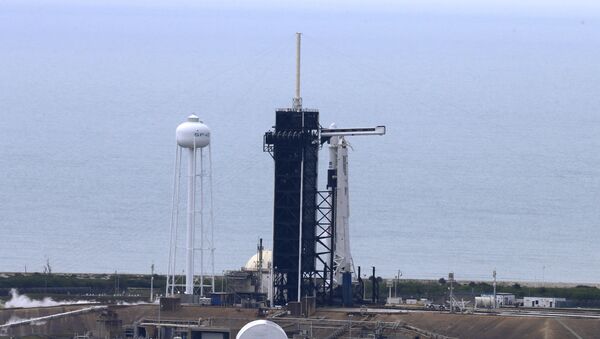 The campaign video in question reportedly violated NASA's guidelines which prohibit the use of names and likenesses of active astronauts in advertising or marketing material.

A campaign for the reelection of US President Donald Trump ended up getting flak after releasing a video ad which apparently violated NASA's advertising regulations on its astronauts' depiction, space.com reports.

According to the media outlet, the video, titled "Make Space Great Again" and which has since been removed from YouTube (as well as from the campaign's Facebook and Twitter pages), featured NASA footage of the first SpaceX launch along with "scenes of astronauts Bob Behnken and Doug Hurley" who took part in the test mission and "their families bidding them farewell just before the flight".

And while a spokesperson for the Trump campaign reportedly argued that the video was made from publicly available sources, NASA's guidelines prohibit the use of names and likenesses of active astronauts (such as Behnken and Hurley, for example) in advertising or marketing material.

The video evoked a barrage of criticism when it emerged on social media, with Karen Nyberg, a retired NASA astronaut who is married to Hurley, tweeting that she didn't approve of her and her son's image being used in "political propaganda" without her knowledge and consent.

I find it disturbing that a video image of me and my son is being used in political propaganda without my knowledge or consent. That is wrong. @nasa @JimBridenstine https://t.co/cXcKHxmn6e

​Quite a few netizens voiced their agreement with Nyberg, some of them making rather unflattering remarks about the US president.

I just watched the ad. Absolutely appalling that they’ve done this. I hope @NASA shuts it down immediately.

Trump's campaign team has broken a law regarding use of astronaut images, or so I understand...

I guess that nobody at the White House bothered to read NASA's terms of use of all photographs. Inept +1 for the Trump Administration.

​And a change.org petition called “Stop Donald Trump politicizing SpaceX and NASA accomplishments”, which emerged in an apparent response to the video in question, has already accrued over 6,000 signatures.

A lot of people at NASA and SpaceX are upset about that MAGA space ad:

​Some social media users, however, praised Trump's support of space exploration instead.

Considering that this president is the first in a long time to be supportive of a return to space, I find the lack of gratitude disturbing. I cannot see Biden being as supportive.

I understand you may not want to be associated with @realDonaldTrump but without him this wouldn't have happened and if he's not reelected we can all watch the space programs disappear again.