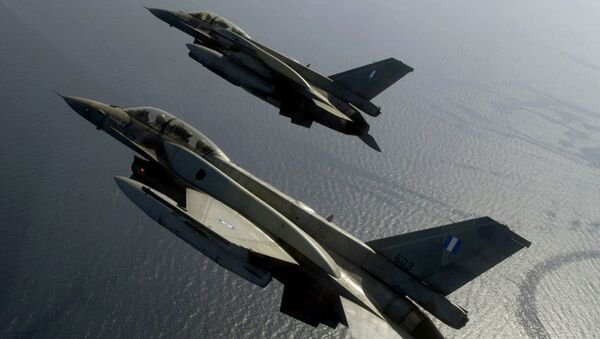 © AFP 2021 / MINISTRY OF DEFENCE / HO
Subscribe
Relations between the two NATO members have been poor for centuries following several major wars, as well as tensions over Cyprus, repeated military confrontations in the Aegean Sea, and concerns by Athens that Ankara is deliberately “threatening Europe” with an influx of Middle Eastern refugees.

Greece is ready to defend itself against Turkey by any means necessary, Greek Defence Minister Nikos Panagiotopoulos has announced, accusing Ankara of “aggressive” behaviour.

“Of course Turkey’s stance has recently been rather aggressive. I believe that the only way Greece can deal with it is, on one hand, to exhaust all its diplomatic weapons, and on the other, to cater for the increase of the deterrence power of the Armed Forces,” Panagiotopoulos said, speaking Greece’s Star TV on Thursday, referring to the ongoing diplomatic dispute over drilling rights in the Eastern Mediterranean.

Asked whether Greek efforts include preparations for a military conflict, the defence minister recalled that the national security advisor to the prime minister has recently indicated that Greece is “preparing for all eventualities,” including “military engagement.”

“We do not want this to happen. However, we are making it clear toward all directions that we will do what it takes to defend our sovereign rights to the greatest extent, if you catch my drift,” Panagiotopoulos warned.

The defence minister’s comments came hours after Turkish President Recep Tayyip Erdogan held a press conference in Ankara with Libya’s Government of National Accord Prime Minister Fayez Al-Sarraj, and announced that Ankara and Tripoli would proceed with oil exploration and drilling in maritime territories that are part of the Greek continental shelf.

#LIBYA - After the liberation of the al-Watiya air base and yesterday's capture of the Tripoli International Airport, it is clear that Warlord Haftar has lost the war for the capital. #GNA leader al-Sarraj is visiting Turkish President Erdogan today. pic.twitter.com/hyFbXd0adu

Earlier this week, Alexandros Diakopoulos, the retired Navy vice admiral serving as national security advisor to Prime Minister Kyriakos Mitsotakis, told reporters that Athens was implementing a plan to pressure Ankara into halting its illegal activities. “Of course, Turkey knows that it does not have international law on its side, and that is why it is trying to bring our country into a purely political debate,” he suggested. Diakopoulos warned that Greece was ready to react militarily if Ankara violated its waters, but added that the government currently believes “that such a thing will not be needed.”

Relations between Greece and Turkey have been poor for centuries, including most of the last 100 years, with the countries fighting a war between 1919-1922, and clashing diplomatically over Cyprus, particularly after the Turkish invasion of the island in 1974. In addition, despite both being members of the NATO alliance, the countries’ naval and air forces have clashed in the Aegean Sea on a regular basis over disputed territorial boundaries,  with dogfights between Greek and Turkish warplanes taking place regularly and leading to losses for both sides. As recently as last month, the Greek Air Force reported intercepting Turkish fighter jets over the eastern Aegean islets of Agathonisi and Anthropofagoi.

Last year, the US Naval Institute published a scenario for a possible wide scale Turkish invasion of the Greek islands and proposed how the US might respond to such an event. 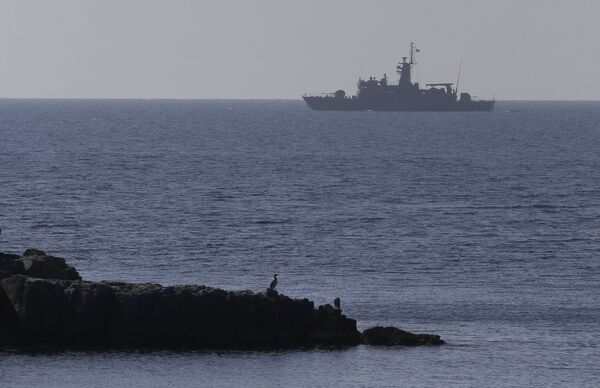 A Greek Navy warship patrols near the eastern Greek Island of Agathonisi and the nearby Turkish shores, on the Aegean Sea (File)
© AP Photo / Lefteris Pitarakis

In addition to its conflict with Athens, Ankara also maintains tense relations with Cyprus, and invaded parts of northern Syria, ostensibly to establish a buffer zone against Kurdish militants whom it classifies as terrorists. Turkey has also waged a war with Kurdish militants in the autonomous region of Iraqi Kurdistan. Earlier this year, Turkey also sent troops to assist the US-supported and UN-backed Government of National Accord in Libya. Libya’s Tobruk-based government and the Libyan National Army, meanwhile, have accused Ankara of violating a UN arms embargo.

000000
Popular comments
The Ottoman Turks are attacking in multiple fronts: 1)Turkey invaded Kurdish parts of northern Syria with the blessing of Russian diplomats 2)Turkey intervention in Idlib in 2020 to support Jihadist under the pretext of stopping refugees 3)flooding Greece with refugees in 2020 4)intervention in Libya in 2019 5)claiming the economic exclusive zone of Cyprus 6)Turkey expanding their economic exclusive zone in Mediterranean to block Egypt

FeEisi
5 June 2020, 18:49 GMT
000000
Countries that can work against Erdogan's Islamist Ottoman ambitions: Syria, Egypt, Russia, LNA Haftar, UAE, Cyprus, Greece. In Syria Russia hasn't developed an alliance with Hezbollah or Iran despite both having the same goal of defeating Jihadist. Likewise all these anti-Ottoman countries don't need an alliance but a shared clear goal. Egypt can purchase Russian naval ships and submarines to better help Greece should both countries decide they want to move beyond a common goal but form an alliance.