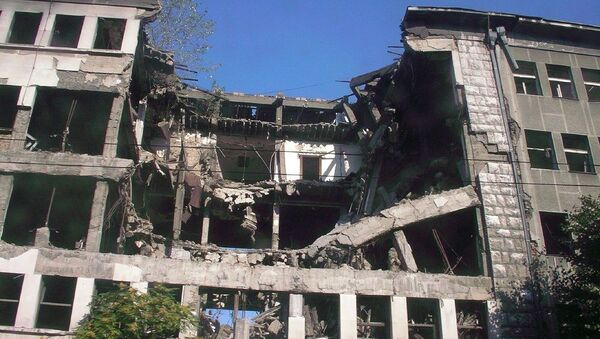 CC BY 2.0 / Lisa Cyr / NATO art
Subscribe
The public has again drawn attention to the issue of how depleted uranium, which NATO used during its aggression against Yugoslavia in 1999 to bomb Kosovo, affects the human body.

The Court of Appeal in the French city of Ren has sustained the claim by the widow of gendarme captain Henri Friconneau, who served in Kosovo in 2000; the woman claimed that her husband had died of depleted uranium irradiation. According to the Serbian expert, this precedent could mark the beginning of a campaign for truth, similar to the one that has been going on for years in Italy.

After four years of lawsuits, Friconneau’s widow has managed to prove the true cause of her husband’s death. There are many similar stories in Italy, where families of soldiers who died or received serious illnesses in Kosovo have been for years conducting and winning suits against the state, despite an active rebuff from the Italian authorities.

Dusan Gujanicic from Belgrade Institute for Political Studies pointed out that the Friconneau case is the first case of its kind in France that the press has at least showed interest in. According to him, the case could become a precedent that would provide the families of French soldiers who died of depleted uranium irradiation in Kosovo with legal and moral grounds to demand confirmation of the true causes of their death.

"As for the French citizens, we have to monitor the situation. I can’t name the exact number of people who could file claims, but I expect something similar to happen in the foreseeable future," he said.

However, according to him, one shouldn’t expect the number of lawsuits in France to exceed the number of similar cases in Italy, since French soldiers were much less exposed to depleted uranium: they served in Northern Mitrovica, while Italians were deployed in Metohija, on the border with Albania, where depleted uranium bombings were the most active.

"Considering this case, now it is our state and our diplomacy that lead the game. They should as much as possible commit to explaining to the whole world that what happened in Yugoslavia was a real humanitarian catastrophe. All Serbian organizations that can somehow influence the development of the situation should join this campaign," Gujanicic said.

According to him, it is Serbia’s concern to push the truth through into French public opinion; and the media play a huge role here, they should monitor the consequences of the Friconneau case and report them.

Gujanicic believes that Serbia should encourage the families of the French military to seek the truth in court so that France talks as much as possible about the Yugoslav humanitarian disaster.

The Serbian political scientist stressed that one shouldn’t have any illusions that the Friconneau case would soon become the number one news in the French and world media, but it could still have consequences if the case gets maximum media publicity.

"This is a long-term, exhausting struggle, and the results won’t appear overnight. At the same time, one shouldn’t forget about the resistance on the part of certain state and near-state structures, such as the one faced by the families of Italian military personnel, some of whom spoke about pressure and intimidation by the authorities," he recalled.

Despite the fact that the expert believes that it’s too early to make concrete and far-reaching conclusions, he is convinced that Ren court’s decision can serve as a legitimate basis for raising the question of the effects of depleted uranium.