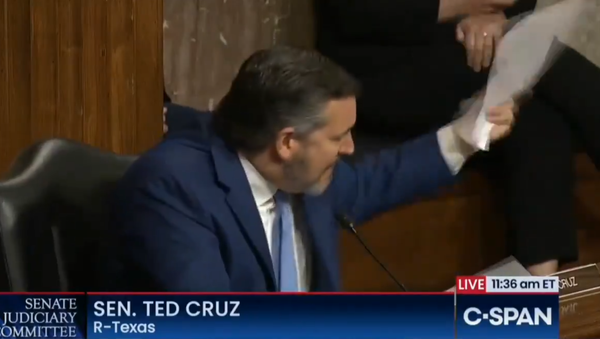 © Photo : Screengrab / CSPAN
Subscribe
The former bitter 2016 campaign rivals teamed up to go after the Democrats amid the release of previously classified documents showing that members of the Obama White House allegedly began to probe and try to undermine incoming Trump administration officials using ‘Russian collusion’ claims, despite a lack of any actual evidence.

President Donald Trump has retweeted Republican Party chairwoman Ronna McDaniel’s 2 minute video of an enraged Texas Senator Ted Cruz ripping into former President Obama and former Vice President Joe Biden over their alleged systemic and illegal effort to use the US intelligence community to go after Trump using the pretext of Russiagate.

“The evidence that has been made public has made clear that the Obama administration has targeted his political opponents, targeted President Trump and his campaign, unleashed, weaponized, and politicized the Department of Justice, the FBI, and the intelligence community. And that the decision making to do so went right up to the very top,” Cruz says in the video, while speaking at a Senate Judiciary Committee meeting investigating alleged Obama abuse of power on Wednesday.

“We know that on January 4, 2017, the FBI concluded in the document that has just been released that General Michael Flynn was quote ‘no longer a viable candidate to be part of this larger case.’…The next day, James Comey, the director of the FBI, is sitting in the Oval Office with Barack Obama, with Joe Biden, and…according to a memo from Susan Rice…tells the president ‘we’re investigating Michael Flynn by the book.’ Well unless the book is Richard Nixon’s Watergate - the day before the FBI said they were closing the investigation and there’s James Comey telling Barack Obama we’re going after General Flynn, a decorated three star general, the incoming national security advisor to the president, with Joe Biden sitting right there, nodding along,” Cruz added.

The Texas senator’s comments come following the release in late May of a declassified ‘top secret’ email by Obama National Security Advisor Susan Rice to herself, in which she indicated that Comey pushed the White House to investigate Flynn over his contacts with Russian Ambassador Sergei Kislyak despite a lack of any evidence of wrongdoing.

Revealed: Transcripts Uncover Three Things Michael Flynn Wanted From Russian Ambassador
Last week, the Office of the Director of National Intelligence released the transcripts of the Flynn-Kislyak calls, showing that Flynn’s contacts were aimed at preventing a worsening of Russia-US relations, and a failed attempt to lobby Moscow into voting in Trump’s favour in a resolution on Israel at the UN.

Flynn was forced to resign as Trump’s national security advisor in February 2017, just weeks after he took the job, after being accused of lying to the FBI about his contacts with Ambassador Kislyak. The former general became the first casualty in a three-year-long investigation by Trump’s opponents accusing him of ‘colluding with the Kremlin’ to win the 2016 race. Trump was exonerated in April 2019 with the release of Special Counsel Robert Mueller’s comprehensive report on the matter, which found no evidence of collusion.

In 2018, former FBI chief Comey admitted that his agents had entrapped Flynn into making false statements, and boasted that this was something he “probably wouldn’t have done or maybe gotten away with in a more organized administration.”

Last month, after the Justice Department moved to drop its charges against Flynn, Trump suggested that if he were a Democrat instead of a Republican, Obama and Biden would have been given 50 year jail sentences for their illegal behaviour.