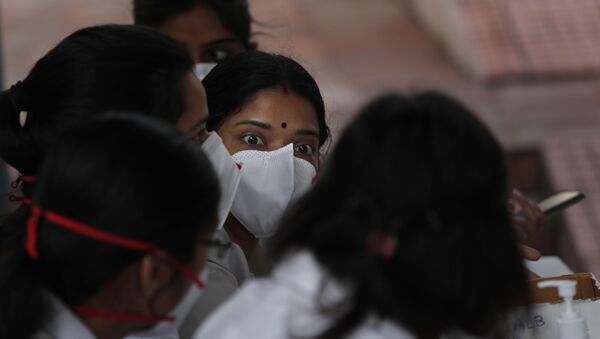 Pratibha Sharma
Sputnik correspondent
All materialsWrite to the author
New Delhi (Sputnik): Showers of flower petals are no longer effective in boosting the morale of Delhi's frontline health workers, as they are balking at the burden of a mounting death toll and a four-digit spike in daily cases. The question on everyone's mind is: will India face its worst-ever shortage of medics amid the pandemic?

Doctors are scared and frustrated. Frontline hospital staffers are afraid to touch patients without protective gear - these are the words of a Delhi-based women who was left scrambling to secure treatment for her COVID-19 positive and disabled grandmother.

She explains to Sputnik how difficult the journey was to secure a bed for her grandmother, who was a primary contact of a COVID-positive person and had severe symptoms like trouble breathing.

"When you see your loved one in pain and no one is tending to him or her because of the fear, you have to do it yourself, no matter how risky it is. I called up a CAT ambulance when my grandmother had trouble breathing and the health worker refused to touch my grandmother. I don't blame him for being scared for his life. I eventually had to carry my grandmother into the ambulance," she said.

'Sheena' (not her real name) narrated multiple such incidents, when doctors lost their cool with her, health workers refused to tend to her grandmother, guards in the hospital roamed without PPEs and how she waited in the risky hospital environment for hours with a COVID-19 kit in hand, waiting for someone to test her grandmother.

She says that after another ambulance refused to ferry the patient citing end of their work hours, she had to ferry about her grandmother in a private vehicle several times, which violates the new norms and considered risky.

Delhi chief Arvind Kejriwal claims that the situation in India's capital is under control, but there are signs that this is far from the case. The state government's move to keep its border sealed despite the federal government lifting the lockdown; the widespread reports of requirements of additional beds and burial plots, and talk of reserving hospitals beds in the capital for Delhiites are an indicator that the state is bracing for worse.

In such a situation, the burden falls on the city's frontline health staff, although the doctor-patient ratio offers no cause for comfort. According to the 2018 National Health Profile, there is one public doctor for every 2,203 people in Delhi, where there are reportedly 12,333 active COVID-19 patients.

Due the limited data provided by the state, it is not clear how many doctors have been allotted for COVID-19. However, the number of COVID-19 beds available to patients is 6,731.

With the third highest number of COVID-19 cases in the country and cases seeing an average uptick of 1,000 everyday, it is expected that Delhi will soon see the threshold of its medical capacity.

Based on the data presented by the health ministry in Parliament, the total number of Medical Council of India-registered doctors in the country is 1,201,354 as of 30 September 2019.

Moreover, the doctor-population ratio in most states of the country is low. The threat looms large over the Indian states of Bihar, Uttar Pradesh and Jharkhand, where 30 districts, ranked lowest in terms of density of nurses, falls.

Initially, migrants returning back home to Bihar were being quarantined as per the protocol. But now, the workers are being asked to go straight to their homes. The district officer of Sheikhpura in Bihar has claimed they neither have the staff to take care of returning workers, nor the space to quarantine them.

The worst-hit state Maharashtra, which has 38,502 active cases, recently asked the southern state of Kerala to send doctors and nurses for a new COVID-19 treatment centre in Mumbai.

Delhi Chief Minister Arvind Kejriwal, on Tuesday, assured the citizens of the capital that the government is "four steps ahead of Corona". But Sheena claims that it took four days for the COVID test report of her "symptomatic" grandmother to arrive.

"We tended to her at home until the test reports of her being COVID-19 positive came in. I told doctors that it's risky to take her home as other people may get affected, but they refused to admit her without results. Some even claimed they have no beds," she said.

She said that after the results came in, she could secure a bed in one of Delhi's government hospitals only after rekindling her long-lost contacts. "No one has time for you, you get only two calls from the hospital - one informing that the patient can be discharged, or the other informing you about his or her death."

The Delhi government on Monday launched a 'Delhi Corona' app to provide people with real-time, hospital-wise data about the availability of beds and ventilators. The state chief claimed that nearly 4,000 beds in the hospitals are vacant and only 2,600 have been occupied by COVID-19 patients.

The government has also been recommending home quarantine for patients with mild symptoms. However, disheartened to the core, Sheena criticised the Kejriwal government's advice. "The common man of Delhi lives in congested houses and slums. They do not have the luxury to relax in a room of their own."

The family initially tended to the grandmother at their home, and Sheena's brother and his wife are showing symptoms of COVID-19. She is scared for her little girl. "If I or my daughter test positive for COVID-19, the Delhi government should be held responsible," she said.