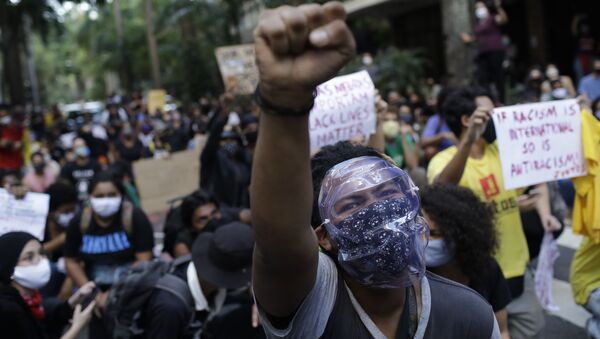 Camargo has not denied the authenticity of the recording and appeared to take a defensive stance, saying that the cultural foundation he is heading is “in sync” with Bolsonaro’s federal government. Meanwhile, a group of MPs have asked the Public Prosecutor’s Office to investigate the comments.

The head of the government-funded Palmares Cultural Foundation, which promotes the rights and culture of black Brazilians, allegedly made the comments in a 30 April conversation with two officials about the disappearance of a corporate mobile phone from the organisation.

Who is Sergio Camargo?

Camargo, a former journalist, was named as president of the influential foundation in November, but the appointment triggered widespread protests over his past comments denying racism in Brazil and defending the nation's slave trade. Slavery was practised in Brazil until 1888, making it the last country in the Western world to abolish the institution.

A federal court suspended the appointment in December after a request from activists, but the decision was overruled by the country’s Supreme Court in February.

What did he say on the tape?

According to the recording, Camargo claimed that the phone went missing during his forced absence from office.

“I exonerated three of our directors as soon as I got back,” he said, as quoted by Estado de Sao Paulo. “Any one of them could have done that.”

It is reported that Camargo called Zumbi, a 17th-century Afro-Brazilian pioneer of the anti-slavery movement, as a “son of a b**ch who enslaved n****rs” and vowed to abandon Brazil’s annual Black Consciousness Day.

A group of left-wing lawmakers on Wednesday requested the Public Prosecutor’s Office to investigate the tape for racial hatred and discrimination, and also demanded that Camargo be removed from office.

Camargo did not deny the authenticity of the tape, saying in a statement he regretted the “illegal recording of an internal and private meeting”.

He also said the foundation is “in sync” with the Bolsonaro government and is “focused on the population and not only on certain groups that, by calling themselves representatives of the entire black population, have historically and deliberately benefited from public money”.

The official has a history of controversial statements on race issues. He has previously called Martinho da Vila, a prominent Afro-Brazilian samba composer, a “bum” who should “go back to the Congo” (da Vila was born in Brazil) and referred to American black activist Angela Davis as a “communist and hag” who has nothing do to with “Africa, its customs and religion”.

Camargo has also repeatedly criticised Black Lives Matter, saying that the movement is a “left-wing instrument to bestialise black people”.