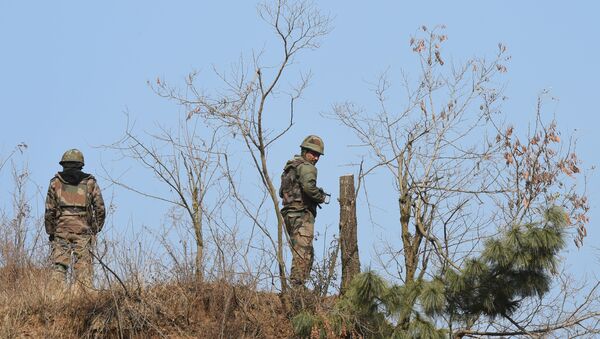 New Delhi (Sputnik): Last week, the Indian intelligence agency alerted security personnel about an increase in infiltration attempts in Kashmir from the Pakistani side. Since April of this year, Indian security forces have killed over 50 militants in the Kashmir Valley.

In an intense encounter on Wednesday morning, Indian security forces killed at least three militants allegedly from the Pakistan-based Jaish-e-Muhammad (JeM) group in the Astan Mohalla Kangan area of South Kashmir’s Pulwama district. Police said that they have recovered a huge cache of arms and ammunition from the site of the firefight.

The police along with the Indian Army and Central Reserve Police Force launched a cordon and search operation in Astan Mohalla in the early morning hours. However, during the intense firefight, one Indian serviceman was injured.

On Tuesday, two militants were killed in the Tral area of Pulwama, while the Indian Army experienced major success on Monday when they eliminated 13 militants in the Mendhar and Rajauri sector along the Line of Control. These suspected terrorists were said to be trying to sneak across the border.

In 2020, Indian forces have so far eliminated over 100 suspected terrorists including Hizb-ul-chief Riyaz Naikoo.

Last week, India's top military officer Lt Gen BS Raju claimed that all suspected terrorist camps and around 15 launch pads in Pakistan-administered Kashmir (PoK) "are full". The official had claimed that there may be an increase in infiltration attempts from across the border this summer to "replenish the diminishing terrorist cadres in Jammu and Kashmir".