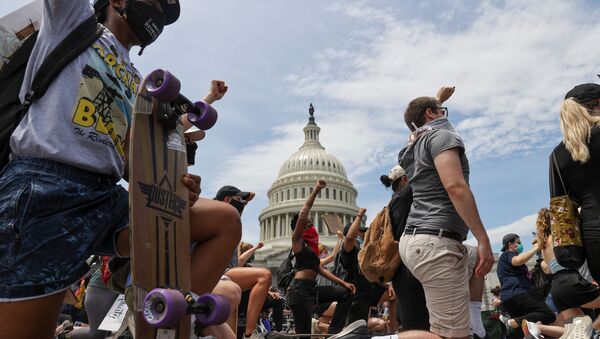 The US Insurrection Act is an 1807 federal law that allows a president of the United States to deploy military and National Guard troops within the country as a means of stopping civil disorder or outright rebellion.

Democratic Senator Richard Blumental said on Wednesday that he is introducing legislative reforms to the Insurrection Act to limit a US president's power under the law and "impose accountability". Blumental told reporters that his proposal's goal is to "establish restrictions on the president's now very vague [...] authority".

​US President Donald Trump announced during a speech at the White House that he "strongly recommends" that a sufficient number of National Guard troops are deployed in every state to stop unrest over the death of George Floyd.

Trump's threat of using the Insurrection Act - an 1807 federal law that empowers a president to in effect declare martial law - sparked strong debates. Concerns heightened after Trump warned that if state governors failed to follow his "recommendation", he would deploy the US military "to solve the problem".

Following Trump's announcement, White House press secretary Kayleigh McEnany said during a briefing that, despite the president having the authority to deploy the military to tackle the unrest and suggesting that the move would be "his prerogative", there is currently no need of such drastic measures. McEnany remarked that "right now, we’re looking at a focus on the National Guard".

Trump's statement received strong pushback from several GOP Senators and Defence Secretary Mark Esper, who asserted that the military would be involved only "in the most urgent and dire of situations", and noting that "we are not in one of those situations now".

The last time the Insurrection Act was invoked was in 1992, conducted by then-President George W. Bush in an attempt to tackle riots in Los Angeles following a display of excessive police brutality. Echoing the current events, those riots were sparked over excessive force used by police officers in the arrest and beating of an unarmed African-American named Rodney King.

Today, the wave of protests across the country, some of which have turned violent, is the result of the killing of an unarmed black man, George Floyd, by a white police officer, Derek Chauvin.