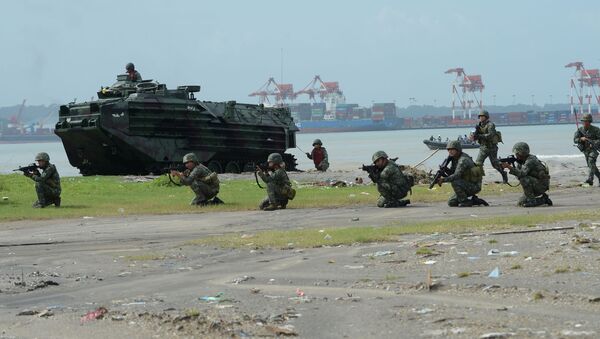 Oleg Burunov
All materialsWrite to the author
In February, Philippine President Rodrigo Duterte ordered the government to terminate an agreement with the US which permits the training of American military personnel in the country.

The Philippines has announced the reversal of a previous decision to terminate the Visiting Forces Agreement (VFA) with the United States.

In a tweet on Tuesday, Philippine Foreign Affairs Secretary Teodoro Locsin Jr. pointed out without elaborating that the government moved to suspend the termination of the VFA “in light of the political and other developments in the region”.

I issued this diplomatic note to the US ambassador. It has been received by Washington and well at that. The Note is self-explanatory and does not require comment except from me. The abrogation of the Visiting Forces Agreement has been suspended upon the President’s instruction. pic.twitter.com/BXqzyNpOty

The suspension, which came into force on 1 June, will continue for six months and could be extended for another half a year, according to the official.

Philippine Defence Secretary Delfin Lorenzana, for his part, told CNN that the decision was most likely made due to the ongoing COVID-19 pandemic.

"I think the reason I was told is because of this current pandemic plus we need the cooperation from other countries. We need to cooperate with other countries to fight the pandemic. I think the president [Rodrigo Duterte] thought that it’s untimely to end the VFA at this moment, at this time”, Lorenzana underlined.

He expressed hope that the next few months would see additional assistance coming from the US, especially in terms of coronavirus fight-related issues.

"In six months, this is only my guess, the assistance of the US will increase, to fight the pandemic. They already gave us some help, assistance recently, especially in the providing equipment in our quarantine facilities”, the Foreign Secretary said.

The US government, for its part, welcomed Manila’s move, saying in a statement released by its embassy that they are looking forward to “continued close security and defence cooperation with the Philippines”.

The move comes amid the ongoing regional tensions over the South China Sea territories claimed by an array of countries, including the Philippines, Brunei, Malaysia, China, Taiwan, and Vietnam.

Despite having no claims to the territories, the US is also actively engaged in the dispute, sending its military vessels to the South China Sea and sparking harsh criticism from Beijing which calls such acts “provocations”.

In February, Duterte instructed his government to terminate the VFA, adding that “it’s about time we rely on ourselves” and that, “we will strengthen our own defences and not rely on any other country”.

The move came after Duterte repeatedly slammed American politicians for criticising his war on drugs and even banned several US lawmakers from entering the country.

He also denied their accusations of human rights violations by Philippine police that allegedly took place during the anti-narcotics campaign, stating that his country doesn't require any interference by the international community.

The VFA agreement, which was signed in 1998, stipulates the training of US military personnel, including the Navy, the Marine Corps, the Air Force, and the Coast Guard on Philippine soil.

The US has maintained a military presence in the Philippines since the East Asian country gained formal independence in 1945, permitting American Naval, Air Force, and Army bases to be stationed throughout the islands.