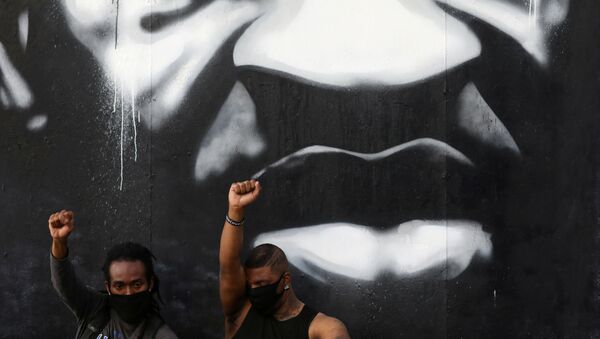 The death of black American George Floyd, 46, at the hands of a white policeman in the US city of Minneapolis last week has stoked anger nationwide, with violent mass protests and rioting continuing across the United States for seven straight nights.

Protests and riots have swept across the US, the UK, Germany, Sweden, the Netherlands, and other countries as demonstrators are calling for justice and an end to racial inequality, with violence and looting breaking out in numerous cities.

On Wednesday evening, activists in Athens, Greece started marching towards the US Embassy protesting against racism in solidarity with the American protesters over George Floyd's death.

Various organisations, collectives, and common residents of Athens are marching to the US Embassy after gathering at Syntagma Square.

Mass demonstrations erupted in the United States on 25 May, after Floyd, an unarmed 46-year-old African American man, died in police custody in the US city of Minneapolis. The protests broke out after a video surfaced showing white police officer Derek Chauvin kneeling on Floyd's neck for more than eight minutes before the detainee became unresponsive.

Table of contents
Trump Says He Does Not Think Military Will Have to Be Used Against Rioters in US
Protesters in Baltimore Help Police to Stop ‘Violent Agitators’, Maryland Governor Says
Police, Protesters Clash in Athens During George Floyd Rally Outside US Embassy – Reports
Minneapolis Cop Charges Elevated to Second-Degree Murder, 3 Others With Aiding & Abetting
Roughly 3,000 Protesters Take Part in 'Black Lives Matter' Rally in Helsinki - Police
US Troops Remain 'On Alert' Near Nation's Capital as Protests Continue - Pentagon
White House: Trump Will Enact Insurrection Act to Use Military for Quelling Unrest if Needed
White House Says US Park Police Acted With Appropriate Level of Force When They Pushed Protesters Back From Lafayette Square on Monday
Pentagon Chief Says US National Guard Did Not Use Rubber Bullets, Tear Gas During Protests
Curfew in US Capital Set to Start at 11:00 pm on Wednesday, Mayor Says
Dutch Police Respond to Riots After Anti-Racism Protest in Rotterdam, Reports Say
Brief Clashes Between Protesters, Police Flare up at Anti-Racism Rally in London - Videos
Minnesota Attorney General to Reportedly Elevate Charges Against Former Police Officer Chauvin to 2nd Degree Murder
Activists in Athens Protest Over Floyd's Death at US Embassy - Video
New firstOld first
22:56 GMT 03.06.2020

WASHINGTON (Sputnik) - President Donald Trump said in an interview that he does not think the US military will have to be used to restore order in cities in the United States ravaged by riots that took place after the initial peaceful protests over the death of African American man George Floyd in police custody.

"Well it depends, I don't think we'll have to," Trump said on Wednesday when asked if the US military will be sent to cities affected by riots so as to restore order.

Earlier on Wednesday, US Defenсe Secretary Mark Esper said during a press briefing that he does not support Trump's decision to invoke the Insurrection Act that would allow him to enable using the military to quell riots in the United States.

Esper said active-duty troops should be used in law enforcement operations only as a means of last resort and the United States is not in that situation at present.

“Thousands of young people in Baltimore have expressed their frustration peacefully, while working together with law enforcement to stand up to and help stop a small group of people with a violent agenda,” Hogan said during a press briefing on Wednesday.

Hogan praised local residents, adding that they will not let “outside agitators” write the story of their city.

ATHENS (Sputnik) - Law enforcement officers and protesters have clashed outside the US Embassy in Athens after a rally in the Greek capital to demonstrate against the death of George Floyd in police custody turned violent, the Greek state broadcaster ERT reports on Wednesday.

According to the broadcaster, thousands of citizens took part in the rally against police violence and racial equality after Floyd, an African-American male, died in Minneapolis after being arrested on 25 May.

In general, the demonstrations were peaceful, although violence broke out at the end of the rally after protesters began throwing stones and Molotov cocktails in the direction of the US Embassy.

Police responded by using flash-bang grenades and tear gas, the broadcaster said. Firefighters were also called to the scene to extinguish dumpsters that were set ablaze, according to media reports.

HELSINKI (Sputnik) - A Black Lives Matter rally held in Helsinki on Wednesday after an unarmed African-American male was killed in police custody last month was attended by roughly 3,000 demonstrators, police in the Finnish capital said.

“A demonstration is taking place on Senate Square in Helsinki. A large number of people have gathered at the site. Police are on hand to monitor public order and security. It is the responsibility of the organizer of the demonstration to instruct people on social distancing,” the city police wrote in a statement on Twitter.

The police added in a separate tweet that roughly 3,000 people took part in the rally, well above the government’s current 500-person limit on public gatherings currently in force as part of social distancing measures to curb the spread of the coronavirus disease.

WASHINGTON (Sputnik) - US troops remain on alert outside the nation's capital amid ongoing unrest over the death of an African American man at the hands of police, a Pentagon spokesperson told Sputnik on Wednesday.

"There is no change. The active duty troops referred to remain on alert within the national capital region, but outside the District proper," the spokesperson said.

US media reported earlier, citing defenсe officials, that active-duty troops brought to the capital area in response to protests are returning to their bases.

"The US parks services when having bricks thrown at them and frozen water bottles had the right to act. They acted with the appropriate level of force to protect themselves and to protect the average citizenry and to protect the peaceful protesters who were among them as well", White House spokesperson Kayleigh McEnany said.

WASHINGTON (Sputnik) - US Defence Secretary Mark Esper during a briefing on Wednesday said no rubber bullets or tear gas were used by the National Guard during recent protests in the nation's capital.

"National Guard forces did not fire rubber bullets or tear gas into the crowd as reported", Esper said.

The National Guard, he added, were instructed to wear helmets and personal protective equipment for their own protection, not to serve as some form of intimidation.

On Monday, US park police also denied using tear gas during the protests near the White House.

During the past two nights, the authorities imposed a curfew in Washington beginning at 7:00 p.m.

The Washington Police Chief Peter Newsham said 19 residents were arrested on Tuesday mostly because of curfew violations. A total of 418 individuals have been arrested since Saturday, he added.

The Minnesota attorney general is expected to announce he is elevating charges against former Minneapolis police officer Derek Chauvin to second-degree murder and will also bring charges against three other policemen involved in the fatal arrest of George Floyd, Senator Amy Klobuchar said in a statement on Wednesday.

Minnesota Attorney General Keith Ellison is increasing charges against Derek Chauvin to 2nd degree in George Floyd’s murder and also charging other 3 officers. This is another important step for justice.

Activists in Athens, Greece have started throwing Molotov cocktails at police officers amid the anti-racism protests, a video from the site shows.