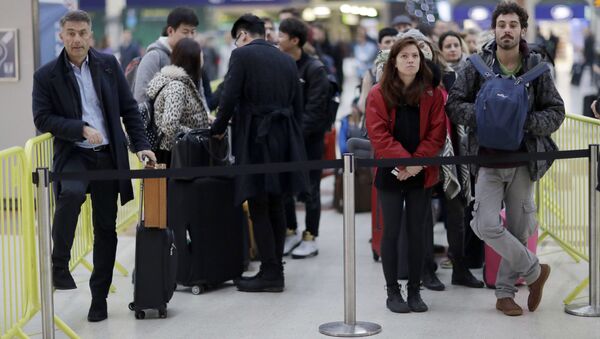 © Photo : Matt Dunham
Subscribe
Lockdown easing is unlikely to provide much-anticipated relief to the UK travel industry as the government is introducing a 14-day quarantine for all entering the country by plane, ferry, or train. British aviation and travel experts have weighed up how the new initiative will affect the country's hopes for economic revival.

The new quarantine measure, which is due to come into force on 8 June, is said to be aimed at shielding the country from new imported coronavirus cases as Europe is lifting pandemic-related restrictions. Critics, however, suggest that it may do more harm than good while British airlines are complaining that the quarantine plan "would effectively kill international travel to and from UK".

Though protecting public health is paramount, the 14-day quarantine measure will inevitably have a significant and long-lasting negative effect on the travel and tourism sector and delaying the much-needed recovery of the UK economy, argues Virginia Messina, managing director of the World Travel and Tourism Council.

She elaborates that the travel and tourism sector contributes 9% of UK GDP and is responsible for 11% of total UK employment. Meanwhile, the COVID-19 crisis has already led to more than 1.2 million travel and tourism jobs being lost in the country. Messina emphasises that the British tourism industry is critical to the country's economic recovery.

Besides hampering the UK economy's revival, the new government measure "will have a damaging effect on the return of air travel" at the start of the peak summer tourism season, echoes John Strickland, aviation expert and director of JLS Consulting.

He presumes that it would be far more effective to test passengers before they embark on a trip to the UK, adding that if one has suspicions of having a virus one should stay home. "Any measures to test will still slow down travel until the time when a vaccine is hopefully made available", Strickland admits.

Quarantine has become the major "deterrent" to travelling to and from the UK today, agrees John Grant, senior analyst for aviation data provider OAG. One should expect a surge in international air traffic as Europe is easing coronavirus restrictions, he notes, adding that Britain is unlikely to capitalise on the tourist season bonanza.

"The proposed quarantine restrictions have caused considerable frustration for both airlines and airports that increasingly feel the UK government has lost control of the COVID-19 event and the impact upon the aviation sector", Grant highlights.

In early May, Airlines UK warned the government that the quarantine would "completely shut off the UK from the rest of the world when other countries are opening up their economies", as cited by the BBC.

Creative Solutions Instead of One-Size-Damages-All Plan

The observers agree that the government should develop a set of options for the country's transportation industry, instead of implementing "a one-size-damages-all solution".

"That may be corridors, bridges, or bubbles of permitted travel", John Grant suggests, adding that "smarter and more effective controls… that follow the data and science" may be introduced later.

Richard Ballantyne, chief executive of the British Ports Association, shares Grant's stance. According to him, British ministers should consider establishing transit corridors and "sea bridges" with neighbouring European countries where the COVID risk now is low.

The 14-day rule already has a few exemptions including lorry drivers, health and care professionals, road haulage workers, as well as travellers from the Channel Islands, Ireland, and the Isle of Man. According to Ballantyne, the list of exemptions should be extended.

"[This] must be a high priority and the focus should not just be on aviation which has more complicated challenges", Ballantyne insists. "Getting passengers moving on these routes helps support critical freight corridors and will help the industry get back on its feet".

Nigel Frith, a senior market analyst at Asktraders.com, has looked at the problem from a different angle. According to him, the coutry's health authorities should consider a set of protective measures that would allow British airlines to thrive while simultaneously ensuring passengers' safety.

"The only way we can try and get our devastated airline industry back to health is for everyone to be mandated to wear masks, both airport side and within the cabin", he suggests. "I would go as far as to encourage the full PPE headgear with a mask and face screen".

Meanwhile, British ministers are already looking into ways of relaxing the 14-day quarantine plan by late July, as the BBC learned from a government source. The UK authorities are reportedly considering extending the exemption list as well as travel corridors to European countries with a low infection risk.