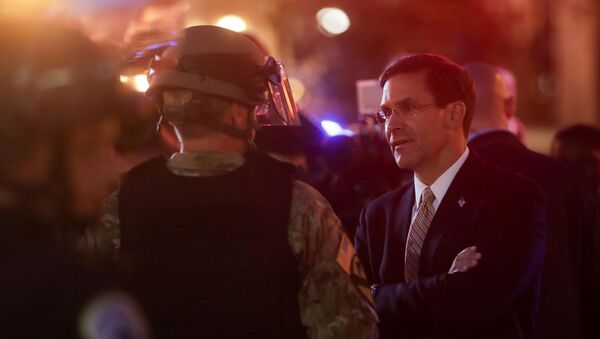 The military presence in Washington DC has been increased as US President Donald Trump announced the mobilization of all federal resources, both civil and military, in his attempts to curb unrest over the killing of George Floyd.

US Secretary of Defence Mark Esper reversed an earlier decision to send several hundred active-duty troops from the Washington DC region, according to Army Secretary Ryan McCarthy, cited by the Associated Press. The change in plans came after Esper attended a meeting at the White House and took part in "internal Pentagon discussions", McCarthy said.

McCarthy expressed the belief that Esper's move was made to ensure that military support in the region is sufficient to respond to potential riots and looting. The spokesperson claimed that Esper received an order from Pentagon to send about 200 soldiers with the 82nd Airborne's immediate response force home on Wednesday, but was notified of the reverse several hours later.

McCarthy outlined that the ongoing situation in the urban area is "dynamic", and suggested that the troops would remain on location for an additional 24 hours.

"It is our intent at this point not to bring in active forces, we don't think we need them at this point. But it's prudent to have the reserve capability in the queue, on a short string.'' McCarthy said in an interview with the AP.

His comments echo the reluctance of Pentagon leaders to use military force to tackle the protests, after Esper insisted that such measures be taken "only in the most urgent and dire of situations", as ongoing protests continue across all 50 US states and in many cities.

Earlier this week, the Pentagon moved some 1,600 troops to the DC region amid remarks by Trump on maximizing the military presence as a means of restoring order in the city after protests over the murder of George Floyd in some cases turned into violence. Alongside with the mobilization of both civil and military resources, a curfew has been imposed in the US capital.