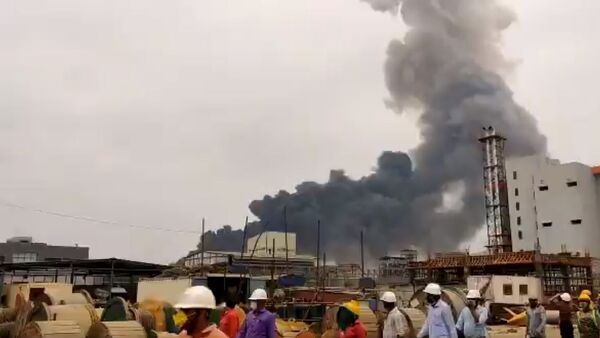 New Delhi (Sputnik): India has witnessed an unprecedented number of accidents in factories and plants in the wake of the COVID-19 lockdown. On Wednesday, a blast occurred the same day the country faced the wrath of the devastating cyclone Nisarga .

At least 40 workers have reportedly been injured in a fire, allegedly triggered by a blast in the nitric acid boiler of a chemical factory in the Dahej area of Gujarat.

"Around 35-40 workers sustained burn injuries after the boiler of an agro-chemical company exploded in the afternoon. All the injured persons have been shifted to hospitals in Bharuch, and efforts are on to control the fire", Bharuch district official MD Modia told the media.

The official said that local villagers in Lakhi and Luvara are being evacuated as a precautionary measure because of the presence of poisonous chemicals near the affected factory.

The fire is at the Yashasvi Chemical plant from where thick clouds of smoke can be seen spewing into the sky, according to footage posted by Twitter users. Some ten fire engines have been rushed to the site along with ambulances.

​​The official cause of the fire at the chemical factory is still unclear, however, police have launched an inquiry into the matter.

Last month, a series of accidents occured at several factories across the country, including a gas leak from a polymer plant in Vizag in which at least 12 people lost their lives and around 2,000 were hospitalised. The factory belonged to South Korean multinational corporation LG.