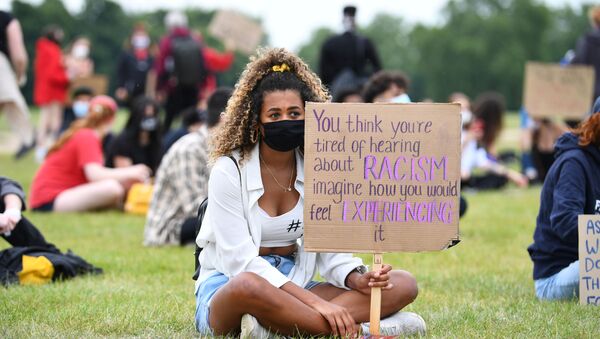 As well as showing solidarity with demonstrators in the US, Britons have expressed anger and frustration at the increased use of stop and search during lockdown in areas with ethnic minority - and during the protests, the rallying cry that “the UK is not innocent” was accompanied by Black Lives Matter banners.

Organisers of anti-racist protests in the UK have accused police of unfairly targeting black people during the lockdown.

Protests were staged in London, Cardiff, Manchester and Nottingham on 30th and 31st June against the murder of George Floyd by a white police officer in Minnesota. There were 23 arrests at the demonstrations in London, “for a variety of offences” including breaching Covid-19 legislation, assault on an emergency worker, possession of an offensive weapon and breach of the peace. The ages of those arrested ranged 17 - 30 years.

​The National Police Chiefs’ Council has published data fortnightly showing the racial breakdown of the fines, but despite claiming the ethnic distribution of penalty notices was proportionate, BAME citizens account for 15.5 percent of England’s population, according to 2016 population figures. BAME people received at least 22 percent of coronavirus lockdown fines as of 15th May.

Metropolitan Police have increased stop and searches by 50 percent in a year - in April 2019 officers carried out 20,981, a year later 30,608. One in five searches led to further action being taken.

“We understand there are concerns across some communities the use of the stop-and-search tactic during the Covid-19 lockdown has been deliberately aimed at certain groups. We’d like to reassure communities this is absolutely not the case. However, our use of stop and search over recent weeks has increased as additional resources have been placed into proactive patrols to tackle crime and keep London safe during this challenging period,” a spokesperson for the Metropolitan police said.

​​Further protests are planned in London this weekend, while a 3rd June demonstration in Hyde Park demands “justice for George Floyd and a public inquiry here in Britain into the disproportionate BAME deaths during the Covid-19 crisis”. Demonstrators have also demanded justice for Belly Mujinga, a 47-year-old railway ticket office worker who died after contracting Covid-19 after being spat at while on duty. The British Transport Police announced last week that no further action would be taken against her attacker.

In a statement, the Home Office said it’d “put in place measures to ensure policing is subject to appropriate levels of transparency and accountability”, with regular inspections of the way forces engage with communities, frequent publication of data on use of police powers and strengthening the police complaints system.

“If an officer does commit a serious breach of the standards expected of them, disciplinary proceedings and, if appropriate, criminal proceedings should follow,” the department concluded.