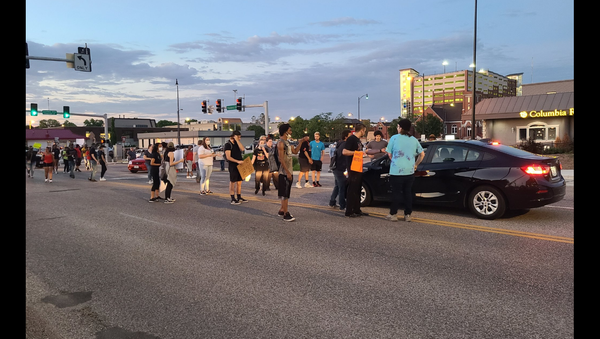 © Photo : Becky_A_Smith
Subscribe
International
India
Africa
Mass rallies across the US are entering a seventh day following George Floyd's death at the hands of the Minneapolis police, with numerous clashes between law enforcement and protesters.

A driver has rammed through a group of people blocking a road in Columbia, Missouri, hitting at least one of the protesters, according to a video, posted on Twitter.

The footage shows a group of protesters walking in the intersection when one of the cars blocked by them suddenly revs up, ramming through the crowd, dropping one of them. The vehicle then disappears as fast as possible, while people are left screaming in horror.

Protesters are physically moving around the intersection to block cars that try to pass through. (For @KBIA) pic.twitter.com/gTBOnT1nSG

​According to Rebecca Smith, who posted the video, police arrived at the site of the incident shortly afterwards.

The video comes just days after another ramming in Minneapolis. A truck driver, named Bogdan Vechirko, directed his vehicle right into a crowd, forcing people to scatter. He was later arrested by the police and charged with assault, according to preliminary reports.

Mass rallies continue across the country, as people are protesting the death of George Floyd, a black man who died after Derek Chauvin, a white Minneapolis police officer, pinned Floyd to the ground with his knee on his neck for over eight minutes last Monday.

Following the incident, Chauvin was charged with third-degree murder and second-degree manslaughter, and a total of four police officers have since been fired.