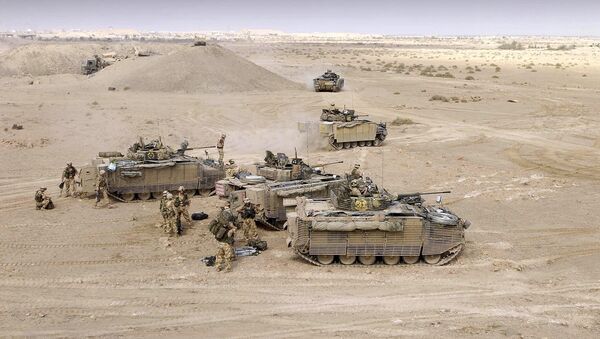 Over 1,000 war crime accusations levelled against British soldiers in Iraq have been dismissed, with just one case still being considered.

Speaking to BBC Radio 4's Law in Action programme, Service Prosecution Authority director Andrew Cayley said it was “quite possible” there will ultimately be zero prosecutions.

Cayley also said he was confident no action would be taken in a separate International Criminal Court probe into alleged abuses by British soldiers, and ICC prosecutor Fatou Bensouda will close the preliminary examination this year in respect of Iraq and the UK.

Many of the 1,000 cases were brought by disgraced former lawyer Phil Shiner, through his firm Public Interest Lawyers, which passed on approximately 65 percent of the 3,392 allegations received by the Iraq Historic Allegations Team. His seemingly crusading efforts led to him being named human rights lawyer of the year in 2004 by human rights organisations Liberty and JUSTICE, for “his tremendous skill, tenacity and dedication to fighting for justice” - he went on to win the Law Society's solicitor of the year award in 2007.

His legal actions were central to the claim UK soldiers had captured, tortured and murdered innocent Iraqi civilians after the Battle of Danny Boy near Amara in 2004 - however, in 2014, a report by the Al-Sweady Inquiry ruled the dead had been members of the Mahdi army militia, ambushed a British patrol and were killed in exchanges of gunfire. Shiner subsequently admitted paying an Iraqi ‘middleman’ to find claimants, in breach of professional standards.

So after painting a picture that the British Military is some kind of death squad! Its turns out the Lawyer phil shiner who brought charges against Military personal was struck off for misconduct, dishonest and providing false accounts about the actions of Soldiers

​Shiner was subsequently charged by the Solicitors Disciplinary Tribunal on a number of counts of professional misconduct, but failed to attend its two-day hearing, on the basis he was unwell and couldn’t afford to pay for a defence lawyer. He nonetheless admitted eight allegations of acting without integrity, including that he made “unsolicited direct approaches” to potential clients, and also admitted another allegation of acting recklessly.

'All Allegations Must Be Scrutinized': UK to Shut Down Iraq Abuse Investigation
Andrew Tabachnik, prosecuting for the Solicitors Regulation Authority, said Shiner’s defence was effectively, "I was not in full control of my mental faculties at this time and I didn’t know right from wrong and what I am doing.”

The tribunal found him guilty of multiple professional misconduct charges, including dishonesty and lack of integrity. In all, 22 misconduct charges were proved to a criminal standard beyond reasonable doubt - including ‘cold-calling’ to find potential complainants and making payments to witnesses to alter evidence - while two other charges were left to lie on file. Shiner was subsequently struck off the Roll of Solicitors and also ordered to pay for the full costs of the prosecution, starting with an interim down-payment of £250,000.

“His misconduct has caused real distress to soldiers, their families and to the families of Iraqi people who thought that their loved ones had been murdered or tortured. More than £30 million of public funds were spent on investigating what proved to be false and dishonest allegations,” chief executive of the Solicitors Regulation Authority, Paul Philip, said in response.

Shiner declared himself bankrupt March 2017, owing almost £7 million to the state. In February 2018, the Insolvency Service found Shiner had sold his own house to his family and put it into a trust that allowed him to continue living there, and had also sold two commercial properties for £550,000 each and transferred two £3,500 guitars to family trust. The Service eventually managed to recover nearly £500,000 from Shiner.

000000
Popular comments
This is the true face of the far right. The law and the jail for all except them. They need full freedom even to do the worst crimes.
eehnie
2 June 2020, 17:11 GMT11
000000
Is this why they call them chosen?
parkerjoe
2 June 2020, 17:12 GMT4
000000
Newsfeed
0
New firstOld first
loader
LIVE
Заголовок открываемого материала
Access to the chat has been blocked for violating the rules . You will be able to participate again through:∞. If you do not agree with the blocking, please use the feedback form
The discussion is closed. You can participate in the discussion within 24 hours after the publication of the article.
To participate in the discussion
log in or register
loader
Chats
Заголовок открываемого материала
Worldwide
InternationalEnglishEnglishMundoEspañolSpanish
Europe
DeutschlandDeutschGermanFranceFrançaisFrenchΕλλάδαΕλληνικάGreekItaliaItalianoItalianČeská republikaČeštinaCzechPolskaPolskiPolishСрбиjаСрпскиSerbianLatvijaLatviešuLatvianLietuvaLietuviųLithuanianMoldovaMoldoveneascăMoldavianБеларусьБеларускiBelarusian
Transcaucasia
ԱրմենիաՀայերենArmenianАҧсныАҧсышәалаAbkhazХуссар ИрыстонИронауОssetianსაქართველოქართულიGeorgianAzərbaycanАzərbaycancaAzerbaijani
Middle East
Sputnik عربيArabicArabicTürkiyeTürkçeTurkishSputnik ایرانPersianPersianSputnik افغانستانDariDari
Central Asia
ҚазақстанҚазақ тіліKazakhКыргызстанКыргызчаKyrgyzOʻzbekistonЎзбекчаUzbekТоҷикистонТоҷикӣTajik
East & Southeast Asia
Việt NamTiếng ViệtVietnamese日本日本語Japanese中国中文Chinese
South America
BrasilPortuguêsPortuguese
NewsfeedBreaking
23:03 GMTTaiwan Urgently Needs to Develop Asymmetric Defense Capabilities to Deter China, Pentagon Says
22:51 GMTWatch: Hillary Clinton Weeps as She Reads Her 2016 Victory Speech That Never Happened
22:48 GMTOmicron Strain to Hinder World Economy Revival, WTO Director-General Says
22:44 GMTMBS’ Pre-GCC Summit Tour Takes Him to Doha for First Time Since Lifting Qatar Boycott
21:25 GMTIs Aggressive US Rhetoric Against Russia the Result of Biden's Poor Standing at Home?
20:52 GMTArizona's Ducey Calls in National Guard to Border, Urges Biden to 'Do Anything' With Migrant Crisis
20:45 GMTVirginia Library Removes Holiday Display Featuring 'Gender Queer' & 'Lawn Boy' Next to the Bible
20:13 GMTWhite House Unaware of Reports That Ex-President Bush Was Victim of Havana Syndrome
19:50 GMTInstagram CEO Testifies in US Senate on Potential Harm to Teenagers
19:44 GMTPentagon Chief Austin Rejects ‘Red Lines’ in Ukraine, Taiwan as US Draws its Own
19:01 GMTPiers Morgan Compares Joe Biden to Kim Jong-un in Column Bashing White House's Approach to Media
18:59 GMTPhotos of Ghislaine Maxwell Rubbing Jeffrey Epstein's Feet, Kissing Him Released by US Prosecutors
18:48 GMTJapanese F-35A Makes Emergency Landing During Routine Training Flight - Video
18:23 GMTPutin: Sanctions Under Pretext of US Security Attempt to Contain Russia's Development
18:03 GMTTucker Carlson Warns of Danger of ‘Hot War’ Between US and Russia Over Ukraine
18:02 GMTTrudeau: Canada Will Not Send Diplomatic Representation to China Olympics
17:56 GMT'A Verbal Agreement With Premier League Club? All False': Mancini Dismisses Man United Job Links
17:48 GMTBiden’s Empty Warning Over Putin’s Straw Man ‘Invasion’
17:42 GMTUS Reportedly Becomes Major Destination for UK's Post-Brexit Financial Services Exports
17:41 GMTIndia’s Congress Unveils 'Manifesto for Women' to Woo Voters in Uttar Pradesh