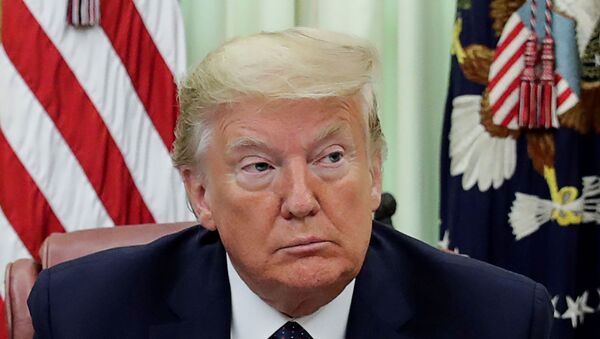 WASHINGTON (Sputnik) - US President Donald Trump faces a new lawsuit accusing him of breaking the First Amendment to the US Constitution by issuing an executive order targeting Twitter and other social media platforms as they seek to counter misinformation, the Center for Democracy and Technology (CDT) said in a news release.

"Today, the Center for Democracy & Technology filed a law suit against President Trump's 'Executive Order on Preventing Online Censorship,' signed May 28, 2020," the release said on Tuesday. "The suit argues that the Executive Order violates the First Amendment by curtailing and chilling the constitutionally-protected speech of online platforms and individuals."

CDT president and CEO, Alexandra Givens, said that Trump's executive order is designed to deter social media services from countering misinformation, voter suppression and the stoking of violence on their platforms.

"CDT filed suit today because the president’s actions are a direct attack on the freedom of speech protected by the First Amendment. The government cannot and should not force online intermediaries into moderating speech according to the president’s whims," Givens noted.

Blocking Trump's executive order is crucial for protecting freedom of speech and continuing the important work of ensuring the integrity of the 2020 election, Givens said.

On 26 May, Trump signed an executive order calling for a series of legislative and legal actions to prevent popular social media platforms including Twitter, Facebook, and Google, from regulating user content. The move came after Twitter flagged potentially-misleading tweets regarding mail-in ballots posted by the president on Tuesday.

Three days later, Twitter slapped a 'public interest notice' on a Trump tweet regarding the Minneapolis protests - protests triggered by the fatal arrest of African American George Floyd by white police - saying the president had violated rules concerning the glorification of violence.