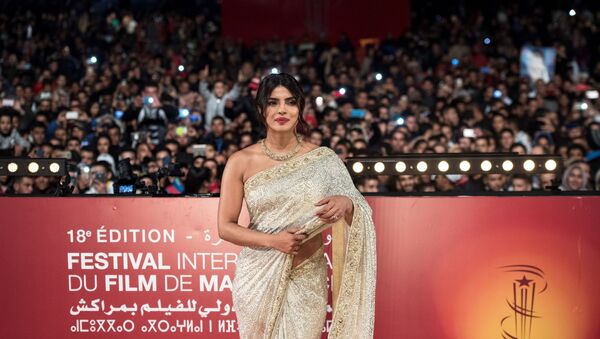 New Delhi (Sputnik): For the past week, social media has been taken over by posts supporting the #BlackLivesMatter movement after African-American man George Floyd was killed during an arrest by Minneapolis police, which led to violent protests across the country.

As millions of protesters gather across America, including in front of the White House, in support of the #BlackLivesMatter movement, Bollywood celebrities from India, including Priyanka Chopra Jonas, Kareena Kapoor Khan, Tiger Shroff, and Ranveer Shorey, among others, have expressed solidarity with it.

There is so much work to be done and it needs to starts at an individual level on a global scale. We all have a responsibility to educate ourselves and end this hate. End this race war here in the US, and around the world. Wherever you live, whatever your circumstances, NO ONE deserves to die, especially at the hands of another because of their skin color. ⁣⁣⁣ ⁣⁣⁣ On May 25th, George Floyd was pinned down by the neck by a Minneapolis police officer and died. He laid there, fighting for his life, struggling to breathe, and other officers just stood there and watched. The officer has now been charged with murder.⁣ ⁣⁣⁣ George, I am praying for your family. ❤️ ⁣⁣⁣ ⁣⁣⁣ Text “FLOYD” to 55156 and sign the petition. ⁣⁣⁣ #JusticeForGeorgeFloyd

B-town stars who have shared the widely circulated “Please! I cannot breathe” post – which were Floyd’s close-to-last words before he was suffocated to death by the police – on their social networking handles, are drawing flak for maintaining pin drop silence when India was burning in communal clashes at the beginning of the year.

Priyanka Chopra is the truest definition of NRIs saying BLM but not giving a shit about the numerous Kashmiris killed by the Indian forces. pic.twitter.com/8d47kOff0l

The Black resistance movement in the USA DOES NOT need sUPpOrT from spinless leeches like you. You can not stay tight-lipped on Rohith Vemula, Delhi Pogrom, CAA/NRC, Najeeb, Akhlaq, Payal Tadvi, Delta Meghwal and then pretend to care about racial injustice in the US. 2/3

In fact #PriyankaChopra was rightly described as a con-woman. #BlackLivesMatter https://t.co/jDu5w7xdSh

​Kashmir-based Indian politician Omar Abdullah also bashed the B-town celebs for taking a stand in other country’s mess – when they chose to keep quiet when their own country was a mess.

So much respect for all the celebrities tweeting #BLACK_LIVES_MATTER. It takes courage to bring your cowardice to the fore when you tweet for American lives but can’t tweet for Indian lives.

​In January 2020, India's capital Delhi was burning in riots that erupted between orthodox Hindus and Muslims after the Narendra Modi government passed the controversial Citizenship Amendment Act (CAA) and the National Register of Citizens (NRC) in December 2019. While the CAA restricted illegal Muslim migrants from applying for fast-tracked Indian citizenships, NRC required Indians – especially minorities – to prove their ethnicity with ancestral paperwork and documents.

Millennials in India – several of whom were students – came forward as front liners at the time to protest against the perceived communal discrimination. The protestors were met with violence, where police officials were accused of initiating physical tussles in several instances. Civilians, as well as police officials, lost their lives during the violent days – which witnessed stone pelting and even gun crimes.

On 15 December, the police used tear gas shells and cane-charges to control mobs in Delhi, on the same day that the government enforced the CAA. Police allegedly dragged students out of Jamia Millia Islamia University in Delhi after the protest turned ugly. More than 100 activists and 35 policemen, including some senior officers, were injured.

Similar instances were reported from other colleges and universities, including Jawahar Lal Nehru University (JNU) and Aligarh Muslim University (AMU) in India.