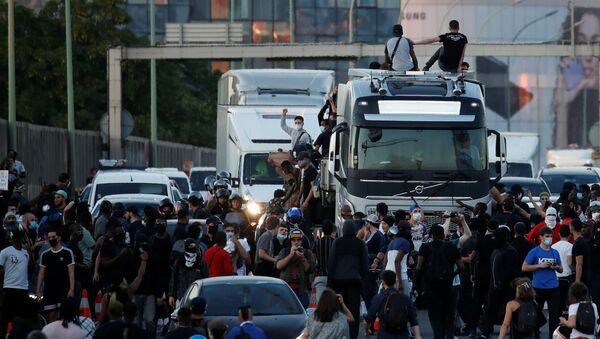 PARIS (Sputnik) - More than 19,000 people took to streets in Paris on Tuesday in protest against police violence that is believed by many to be the cause of death of black man Adama Traore in custody, the BFMTV broadcaster reported, citing a police source.

The city authorities have banned the rally over health concerns and fear it might lead to unrest.

The BFMTV broadcaster noted that though the demonstration had initially been peaceful, some of the protesters had begun assaulting police.

Law enforcement officers reportedly used tear gas against the demonstrators. The rally participants, in their turn, threw bottles at the officers.

The protesters are using parked bicycles and kick scooters to make barricades and are setting them on fire.

The protest wave was started over the case of Adama Traore, a 24-year old French man of Malian origin, who died in police custody in 2016. Videos show the protestants kneeling before the police, shouting out "Justice for Adama" and holding up posters with a slogan "No More Silence".

​The circumstances of Traore's death are still to be established and the police have said that it had been caused by a medical condition that he had. Moreover, some medical experts have said he died due to a cardiac condition. However, independent expertise commissioned by Traore’s family showed last week that his death had been caused by asphyxiation.

The protest in Paris followed large-scale riots in the United States, which were caused by the death of African American man George Floyd in police custody in late May. Video footage of his detention, which has been circulating online, showed Floyd saying he could not breathe as a police officer was kneeling on his neck for eight minutes. A county examiner in the US state of Minnesota in a medical report ruled that Floyd's death was a homicide.