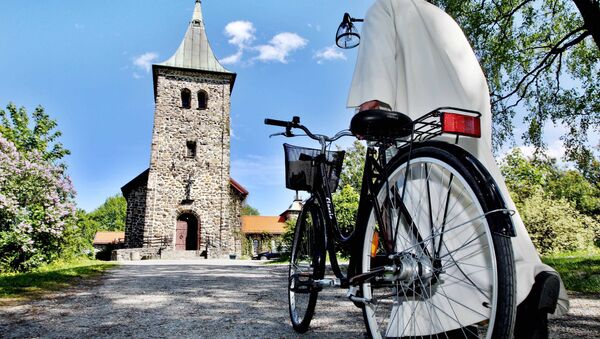 © AFP 2021 / DANIEL SANNUM LAUTEN
Subscribe
Admittedly 48 percent of Norwegians don't believe in God, while only 30 percent do, and another 21 percent are hesitant. The proportion of believers is the lowest in the 25-39 age bracket at 19 percent, according to the new survey.

The proportion of Norwegians who say they believe in God has dropped from 53 percent to 30 percent in the past 35 years, according to the Norwegian Monitor 2020 survey, which is conducted every other year and maps values, attitudes, and behaviours over time in Norwegian society.

The percentage of people who consider themselves believers has fallen by 4 percent since the last survey, which was done two years ago. Since 1985, when the first study of this kind was published, the drop reached an amazing 23 percent.

To the question of whether they believe in God, 48 percent of Norwegians answered no, 30 percent answered yes, and another 21 percent were uncertain. The proportion of believers is the lowest in the 25-39 age bracket, with 19 percent.

In a related issue, the proportion of those who view themselves as Christians has fallen from 24 percent to 21 percent over the past two years.

While merely 30 percent declare that they believe in God, 61 percent of Norwegians said they belonged to a Christian denomination. Twenty-two percent don't identify themselves with any beliefs or outlook, while 10 percent identify with the Humanist Association. Another 4 percent said they belonged to a different belief or outlook and 2 percent stated they were uncertain.

Norwegian Humanist Association Secretary General Trond Enger has argued that the figures reflect “major demographic changes” in the population that have not quite reached the politicians.

According to Enger, politics and public service are some 20 years behind and out of step with the general population. Enger pointed out that Norwegian nursing homes and hospitals only offer priests and that only priests can pass on the death message on behalf of the police and highlighted a lack of premises and ceremony rooms for other religious communities.

“We have also seen it during the corona crisis, where the vision-neutral premises were closed in many places, while the churches were open”, Enger said, calling on politicians to “update their understanding” of what Norwegians do and don't believe in.

By contrast, Preses Olav Fykse Tveit argued that religion and faith are much more than opinions in the polls.

“It's about rituals and different cultural expressions, traditions, buildings, and much more. There are still 3.7 million Norwegian citizens who are members of the Norwegian Church, and many of Norway's religious communities are Christian. The relationship with the Christian faith and religion also expresses the fact that many people know that the church means something in important stages, for example, seven out of ten in 2019 said they would marry in the church”, Fykse Tveit said.

In recent decades, the Church of Norway has been leaking worshippers at an alarming rate, much like its peers in fellow Scandinavian countries. Over the past decade alone, membership in the Norwegian Church has dwindled by ten percent. Should the current rate persist, the rate of baptism may fall below 50 percent. As of today, children who have at least one parent registered as a church member are automatically registered as members as well. However, there is an option to “unsubscribe” from the church online at any given time, yet unlike neighbouring Sweden, Denmark, and Finland this gives no financial benefit in terms of taxes.

In 2017, Norway reworded its constitution from “the state religion” to “national church” in what many perceived as a parting of ways with the Church of Norway.

000000
Popular comments
Even if we presume that God does exist, religions and their clergy are the best way to keep people from that God. As long as people are supposed to need intermediaries for their dialogue with God, they are not considered as rational beings. The Stoics already knew that over 2,000 years ago...
Sertorius
2 June 2020, 13:27 GMT1
000000
...and one day we will all appear before our creator, all of us. That's why this world is in convulsion: it has decided to put Man in the place of God Almighty who must reign over His Creation. Oremus pro invicem. Go well Kurkku, if I have offended you in the past, please accept my apologies.
armor
2 June 2020, 14:12 GMT1
000000
Newsfeed
0
New firstOld first
loader
LIVE
Заголовок открываемого материала
Access to the chat has been blocked for violating the rules . You will be able to participate again through:∞. If you do not agree with the blocking, please use the feedback form
The discussion is closed. You can participate in the discussion within 24 hours after the publication of the article.
To participate in the discussion
log in or register
loader
Chats
Заголовок открываемого материала
Worldwide
InternationalEnglishEnglishMundoEspañolSpanish
Europe
DeutschlandDeutschGermanFranceFrançaisFrenchΕλλάδαΕλληνικάGreekItaliaItalianoItalianČeská republikaČeštinaCzechPolskaPolskiPolishСрбиjаСрпскиSerbianLatvijaLatviešuLatvianLietuvaLietuviųLithuanianMoldovaMoldoveneascăMoldavianБеларусьБеларускiBelarusian
Transcaucasia
ԱրմենիաՀայերենArmenianАҧсныАҧсышәалаAbkhazХуссар ИрыстонИронауОssetianსაქართველოქართულიGeorgianAzərbaycanАzərbaycancaAzerbaijani
Middle East
Sputnik عربيArabicArabicTürkiyeTürkçeTurkishSputnik ایرانPersianPersianSputnik افغانستانDariDari
Central Asia
ҚазақстанҚазақ тіліKazakhКыргызстанКыргызчаKyrgyzOʻzbekistonЎзбекчаUzbekТоҷикистонТоҷикӣTajik
East & Southeast Asia
Việt NamTiếng ViệtVietnamese日本日本語Japanese俄罗斯卫星通讯社中文（简体）Chinese (simplified)俄罗斯卫星通讯社中文（繁体）Chinese (traditional)
South America
BrasilPortuguêsPortuguese
NewsfeedBreaking
12:02 GMTRussian Presidential Spokesman Says Gazprom Fulfilling All Obligations
11:54 GMTLabour Leader Says it’s ‘Not Right’ to Say Only Women Have a Cervix
11:43 GMT'F**k Them': Carlson Responds to Yet Another Call to Fire Him Over 'Great Replacement' Theory
11:42 GMT'Piece of Scum': UK Labour Deputy Leader Lashes Out at Tories
11:14 GMTUK Transport Minister Calls on Britons to Behave Normally, Says There is No Shortage of Fuel
11:12 GMTHamas Has No Place in Sudan But Will It Give Up on Former 'Base'?
11:05 GMTJapan Should Look Into Having Nuclear Submarines, Candidate for Ruling Party Head Says
11:05 GMTIsraeli Soldiers Shoot Down Nazi Flag Raised Near Outpost in West Bank - Photo, Video
10:52 GMTTaiwan Strait Situation 'Complex and Grim', Xi Jinping Says as He Calls for 'National Reunification'
10:46 GMTHillary Clinton Urges to Call Her 'Madam Chancellor', But Netizens Come Up With Other Names
10:39 GMTGerman Green Party Might Find Some 'Rare Lizards' to Stop Nord Stream 2, AfD Co-Chair Warns
10:35 GMTWorld War II Bomb Suspends Elections at Several Polling Stations in Wuppertal, Germany
09:47 GMTTunisian Lawmaker Says Ennahda Party's Rigidity Led to Mass Resignation of Members
09:41 GMTCanary Island Volcano Continues to Erupt, Forcing More People to Evacuate
09:41 GMTChina Sells Almost $65Mln Worth of Carbon Dioxide Emission Quotas, Environment Ministry Says
09:28 GMTIRGC Commander Says 'US Hand-Made Armies' Failed to Tackle Terrorists in Afghanistan, Iraq
09:21 GMTKate’s 'Coolness' and William’s 'Bullying' Led to Rift With Harry and Meghan, Book Claims
08:21 GMTIndia’s Main Opposition Party Takes a Dig at Grand Celebration on PM Modi’s Return From US
08:11 GMTPolling Places Open for Parliamentary Elections in Germany
08:00 GMTEximbank Will Support Russian Exports to Croatia