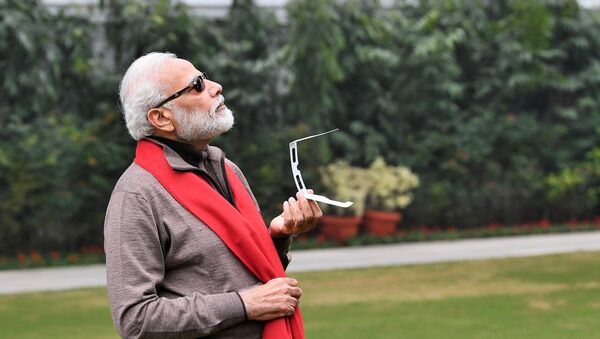 © Photo : Narendra Modi/twitter
Subscribe
New Delhi (Sputnik): Nearly a month after skirmishes along the Line of Actual Control that India shares with China, the situation appears to be tense, with both countries hauling troops to the region. With no official explanation of the happenings at the border, citizens are depending on media reports, leading to apprehension among people.

A section of Twitter users has launched a scathing attack on India's Prime Minister Narendra Modi over the border stand-off with China. A day after trending the hashtag #StepDownModi, Twitter users are demanding clarity over the escalating border situation with China by trending #ModiSpeakUpOnChina.

Several users on Twitter are comparing the situation with Pakistan, when India conducted two surgical strikes and took a stern diplomatic stance as tensions escalated between the two countries following the deadly 2019 suicide bomb blast on an army convoy in Pulwama.

How did you let China enter our zone and capture our soldiers?
Why are you silent on important issues like National Security?
Why do we get to hear from Trump then the PM of India?
What are you hiding?#ModiSpeakUpOnChina before its too late! pic.twitter.com/mT5vVlRRAW

This what Chinese soldiers have done to Indian soldiers in Ladakh! Why is Modi silent? #ModiSpeakUpOnChina pic.twitter.com/ycUWZ0Uq4n

From trending mean memes and taking a dig at Modi, to criticising the government’s policy, Twitter users are expressing their outrage through the hashtag.

Your silence is deafening pic.twitter.com/27mKecDpOd

Others shared media reports that are leaving the people concerned and asking questions like: “Have the Chinese troops occupied Pangong Tso Lake?”, “What steps has the Govt taken to resolve this important issue of National Security?”

India's Defence Minister Rajnath Singh earlier stated that the two South Asian giants are using diplomatic channels to deflate border tensions. However, the heavy movements of troops and vehicles on the LAC by both India and China are leading to speculations among people, with media reports adding fuel to the fire.

The first response to the border tensions with China came on Tuesday from Indian Defence Minister Rajnath Singh, who clarified that the People's Liberation Army's troops had crossed into the Indian side of the LAC. He added that India had taken the necessary steps by sending a large number of troops to match the Chinese deployment in the contested Ladakh region.

On 5 May, the first clashes were reported between Indian and Chinese soldiers on Pangong Tso (lake) in Ladhak, which resulted in significant injuries due to “aggressive behaviour on both sides”. Later, on 12 May, Chinese military helicopters were seen flying close to the LAC on a couple of occasions and subsequently India sent a fleet of Su-30 fighters to conduct sorties in the area. Amid the rising tensions, China's People’s Liberation Army has over 6,000 soldiers deployed in Ladakh and India has also increased its troops in the high altitude area.