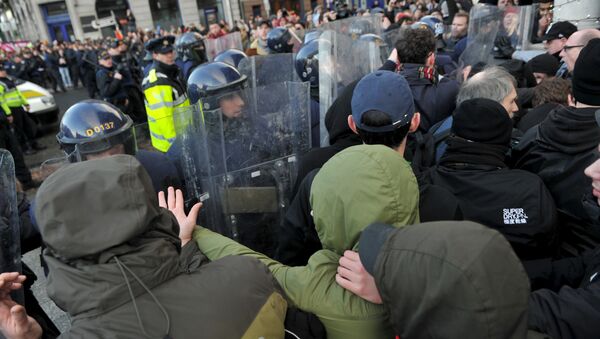 © REUTERS / Clodagh Kilcoyne
Subscribe
The Irish Times understands a number of people who took on supervisory or organiser roles at the protest in the capital were spoken to by gardai on duty, had their names and contact details taken, and are now being investigated under national Covid-19 regulations, which among other things prohibit the organising of large events during lockdown.

Irish police are reported to be investigating the large Black Lives Matter protest held in Dublin 1st June, with the prospect of organisers being prosecuted for their role in arranging a large, lockdown-busting public gathering.

“An Garda Soochana is investigating potential breach of these regulations... and the advices of the Director of Public Prosecutions will be sought in respect of any further actions to be taken. The Covid-19 pandemic remains a public health crisis and An Garda Síochána continues to appeal to all citizens to comply with public health guidelines and Regulations, in particular essential journeys, in order to continue to save lives,” the force added.

Can’t believe there’s idiots moaning about social distancing instead of being proud of Ireland taking the stand that our politicians are afraid to. Stay at home then. There’s innocent people being murdered and jailed by a corrupt rascist government.

​Senior officers are said to be aware of plans to hold another event 6th June, and as permits aren’t required to hold events in Ireland, police would have no power to stop it. Nonetheless, Irish law enforcement concede it’s “unrealistic” to prosecute all protest attendees, or even a significant number of them, due to the sheer volume of people who turned out. The Gardai’s focus is entirely on anyone who took a leadership role, although the event was advertised on social media, and no groups or individuals were identified as having arranged it, making the task of proving precisely who or what was responsible rather difficult.

​Garda HQ estimates 2,000 - 4,000 people attended the protest, with numbers rising as the protest travelled along the route from Dublin’s O’Connell Street to the US Embassy.

“They tried to socially distance at the start but the crowd was too big and the social distancing seemed to be abandoned immediately,” one Garda officer who observed the protest told The Irish Times.