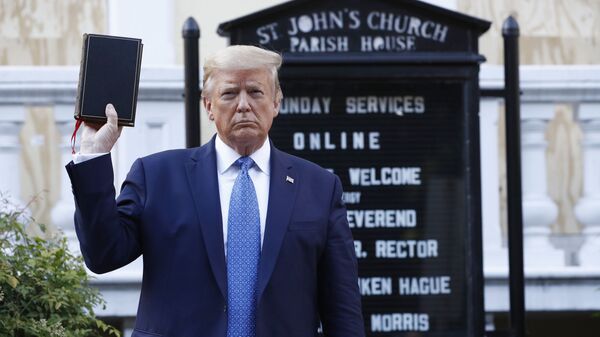 Lilia Dergacheva
All materialsWrite to the author
As the historic St. John's Episcopal Church just a stone's throw from the White House was vandalised during the George Floyd marches in the capital, President Donald Trump ordered to clear the area of the protesters, walking to the church to make a statement from there.

Democratic House Speaker Nancy Pelosi and Senate Minority Leader Chuck Schumer have taken aim at the president following police being ordered to clear out an area near the White House so he could walk to a nearby church, St. John’s Church, which had been vandalised in the course of rallies.

The comments have ended up in the crosshairs of many, with netizens rushing to post videos of rioting “thugs” as a justification for tougher control over the protests. “At a time when our country cries out for unification, this president is ripping it apart”, Pelosi and Schumer said in a late Monday statement, calling on the US president to “respect the dignity and rights of Americans”.

The two lawmakers went on to remark that the “nation needs real leadership”, going on to rip POTUS: “This president’s continued fanning of the flames of discord, bigotry, and violence is cowardly, weak, and dangerous”.

The Dems separately took on POTUS after he instructed police to “dominate” the streets as protests over George Floyd’s death have boiled over into mass riots involving across-the-board arson, vandalism, and ransacking.

After President Trump and administration officials walked through the area cleared by the police to the church near the White House and briefly posed for pictures there, the two top Democrats fumed: “Teargassing peaceful protesters without provocation just so that the president could pose for photos outside a church dishonours every value that faith teaches us”.

However, many appear not to deem Trump’s on-foot visit to the church as another “photo-op”: “I didn’t see a ‘photo-op’. I saw a president standing up for decency and faith after a mob set fire to a church, @CNN pretended it didn’t happen, and Democrats backed the ‘protesters’. They’re looting Manhattan tonight, governor”, journalist Joel B. Pollak wrote, with others echoing the stance:

If you’re more upset that Trump waved a Bible in front of a church than you are about leftist arsonists setting that church on fire, you might be a Democrat! pic.twitter.com/GlBCEurdu1

“The only thing they [Democrats] finally speak up about is Trump holding a Bible in front of a Church that almost burned down??”, another wondered, weighing in along the same lines, like many others:

WHY hasn't Nancy Pelosi, Obama, the Clintons & any Democrat leader condemned this violent destruction of America by domestic terrorists? Why have they been silent?

The only thing they finally speak up about is Trump holding a Bible in front of a Church that almost burned down??

“Yeah...a church which is a historic landmark that the #Democrats SET ON FIRE & defaced last night which is an in-your-face attack on Christians”, one commented.
“It was a historic day”, said a different netizen referring to Tump’s on-foot trip “across a DC street risking sniper fire ”, while another recalled Joe Biden’s visit to a church and him “talking about shooting criminals in the leg”.

Today President Trump made a strong statement by holding up the Bible in front of a burned out historic church. Joe Biden went to church too...and talked about shooting criminals in the leg. Imagine if @realDonaldTrump had said that inside a church! @JoeBiden

Some opted to post visual proof of what they say is resilience and self-restraint on the part of the police in handling the “peaceful” protests:

Incredible self-control for NYPD not to shoot these thugs. pic.twitter.com/7P7h1OxJhg

Peaceful protest.... Trump walked across Lafayette park and took a picture in front of the church the “peaceful protesters” set on fire the night before.
You Democrats think this is an issue for you but you are gravely mistaken. #Trump2020

Democrats, like actress-turned left-leaning activist Alyssa Milano, meanwhile continued to chew over the fact that Trump ordered the territory to be cleared “for a photo-op”, saying they are surprised to see the president “with the Bible”.

Exactly. A photo at a church when he is the least godly person on the planet.

Trump has meanwhile expressed dissatisfaction to some states’ lax response to the sweeping protests, which kicked off after 48-year-old black American George Floyd was suffocated to death while being arrested by a group of Minneapolis policemen. He even promised to deploy the military himself anywhere local officials fail to curb the sweeping social unrest and prevent it from spiraling out of control, irrespective of what critics of the fierce crackdown would say in response.

Over the past week, thousands of National Guard troops have been called in to patrol major US cities in 15 states, with no less than 40 cities introducing curfews to better control the protests sparked by Floyd’s killing. The now former officer, at whose hands he died, was charged with third-degree murder and second-degree manslaughter.