What to Know About Antifa, a Movement Trump Wants to Blacklist as Terrorist Amid George Floyd Riots 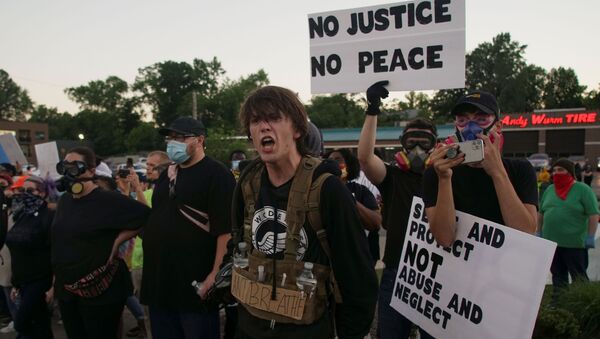 Oleg Burunov
All materialsWrite to the author
Antifa’s planned blacklisting by the White House comes amid the ongoing riots across the US to protest the death of African-American man George Floyd in Minneapolis police custody on 25 May.

President Donald Trump has signalled the US government’s readiness to designate the Antifa movement as a terrorist organisation in a move that makes the group illegal on US territory.

Here’s a closer look at what POTUS described as an anarchist-led movement that he said was “quickly shut down” by the US National Guard amid the ongoing protests in major American cities over the death of 46-year-old black man George Floyd at the hands of Minneapolis police last week.

The history of Antifa, which is short for anti-fascist, dates back to the 1980s, when a group called Anti-Racist Action confronted neo-Nazi skinheads at punk gigs in the US Midwest and beyond, according to Mark Bray, author of Antifa: The Anti-Fascist Handbook.

WATCH as these members of ANTIFA get caught collecting bricks to deface the city of Charlotte in the wake of a protest.pic.twitter.com/jfVcf7FPfF

Apart from neo-Nazis and neo-fascism, the movement, which  doesn't have an official leader or headquarters, is opposed to white supremacists and racism and it was reportedly mostly dormant until Donald Trump became the US president in 2016.

Unnamed representatives of Antifa groups in Oregon were cited by the BBC as saying that they are seeking to build "a movement that really insulates us from” POTUS’ policies.

"It's not just resisting the federal administration but also resisting moves that can lead to fascism, and those happen locally whether from local officials or from local alt-right movements”, an Antifa source told the news outlet.

The movement’s tactics include chanting and forming human chains during protest actions to block right-wing demonstrators, as well as online monitoring of right-wing groups on social media; sometimes, Antifa activists release personal information about their opponents on the Internet in what is known as “doxxing”.

During rallies and protest marches, the most extreme Antifa factions reportedly carry bricks, chains, knives and pepper spray, even though the movement’s sources told the BBC that they denounce the use of weapons by such factions. According to them, Antifa members resorting to the use of force can be seen as sort of self-defence.

Brian Levin, director of the Center for the Study of Hate and Extremism at California State University in San Bernardino, for his part, remains sceptical about Antifa’s non-reliance on violence.

"What they're trying to do now is not only become prominent through violence at these high-profile rallies, but also to reach out through small meetings and through social networking to cultivate disenfranchised progressives who heretofore were peaceful”, Levin was quoted by ABC News as saying.

In January 2017, Antifa members protested Trump’s inauguration and later that year, they confronted a rally of white nationalists in Charlottesville, Virginia and a separate high-profile right-wing event at the University of California, Berkeley.

It remains to add that Antifa supporters are often clad in black and that they sometimes cover their faces with masks or helmets to avoid being identified by opposing groups or the police.

The movement includes a substantial number of women who reportedly perceive the current US administration as being anti-female, citing Washington’s policy on abortion rights, affordable health care, and immigration.

Trump has, meanwhile, pointed the finger at Antifa over "violence and vandalism" across the US, which he claimed is “being led” by the movement and “other radical left-wing groups who are terrorising the innocent, destroying jobs, hurting businesses, and burning down buildings”.

000000
Popular comments
Everything that they are stating about Antifa is like the US government looking itself into a mirror. after all they like to dictate like any fascist state did. Just like ALL politicking, laying blame on someone or something else when it is THEY who the ones responsible. And that is Dumps way of rebranding their f**kl up!!! Havent seen him intervening with anything the about the murderer of Floyd by their Minneapolis S/S P.D. yet?

2007harleydavidsonsg
1 June 2020, 14:39 GMT4
000000
Newsfeed
0
New firstOld first
loader
LIVE
Заголовок открываемого материала
Access to the chat has been blocked for violating the rules . You will be able to participate again through:∞. If you do not agree with the blocking, please use the feedback form
The discussion is closed. You can participate in the discussion within 24 hours after the publication of the article.
To participate in the discussion
log in or register
loader
Chats
Заголовок открываемого материала
Worldwide
InternationalEnglishEnglishMundoEspañolSpanish
Europe
DeutschlandDeutschGermanFranceFrançaisFrenchΕλλάδαΕλληνικάGreekItaliaItalianoItalianČeská republikaČeštinaCzechPolskaPolskiPolishСрбиjаСрпскиSerbianLatvijaLatviešuLatvianLietuvaLietuviųLithuanianMoldovaMoldoveneascăMoldavianБеларусьБеларускiBelarusian
Transcaucasia
ԱրմենիաՀայերենArmenianАҧсныАҧсышәалаAbkhazХуссар ИрыстонИронауОssetianსაქართველოქართულიGeorgianAzərbaycanАzərbaycancaAzerbaijani
Middle East
Sputnik عربيArabicArabicTürkiyeTürkçeTurkishSputnik ایرانPersianPersianSputnik افغانستانDariDari
Central Asia
ҚазақстанҚазақ тіліKazakhКыргызстанКыргызчаKyrgyzOʻzbekistonЎзбекчаUzbekТоҷикистонТоҷикӣTajik
East & Southeast Asia
Việt NamTiếng ViệtVietnamese日本日本語Japanese中国中文Chinese
South America
BrasilPortuguêsPortuguese
NewsfeedBreaking
15:44 GMTIsrael Will Reportedly Push US to Strike Iranian Facility Amid Lack of Progress in Vienna Talks
15:41 GMTAmerica Unveils First-Ever Strategy to Battle Corruption at Home and Abroad
15:30 GMTChina May Build Military Base in Equatorial Guinea Amid Beijing’s Tensions With Washington
15:15 GMTKremlin: Putin Will Listen to Biden's Proposals on Ukraine 'With Great Interest'
15:15 GMTNYC to Use 'Preemptive Strike' Against Omicron With Vaccine Mandate for all Businesses, Mayor Says
15:08 GMT3,000 Security Officers Guard India's Mathura as Hindu Group Threatens to Install Idol in Mosque
14:59 GMTAmid Rumours of US Boycott of Beijing Olympics, How Could the Move Affect the Games?
14:52 GMTUK Policing Minister Not Surprised Over Reports of Drug Use in Parliament Building
14:45 GMTLabour Unions Protest in Brussels Against Low Wages, Expensive Electricity - Photos
14:26 GMTSpanish Court Rules Employee Can be Fired for Job Abandonment During Pandemic - Reports
14:18 GMTAnger and Shock After Intruders Vomit and Urinate at Site of Manchester Arena Bombing Memorial
14:15 GMTUS, UK, Canada Concerned by Tigrayans Arrested Without Charge in Ethiopia
14:07 GMTLionel Messi, Neymar or Himself: Kylian Mbappe Reveals Who's 'Boss' at Paris Saint-Germain
13:58 GMTFormer Indian Shia Leader Embraces Hinduism After 'Death Threats From Muslim Groups'
13:48 GMTMarine Le Pen Accuses EU of 'Playing Role of Firefighter-Pyromaniac' in Ukraine-Russia Tensions
13:47 GMT'Happy a Team Like Barcelona is Interested in Me', Says Salah Amid Liverpool Contract Impasse
13:30 GMTEarth is Getting Its Own Black Box That Will Tell What Caused Humanity's Demise
12:58 GMTChina Says Plots to Thwart Ties With Solomon Islands 'Doomed' as PM Survives No-Confidence Vote
12:53 GMTPutin in Meeting With Modi, Discusses Drug-Trafficking, Terrorism and Situation in Afghanistan
12:46 GMTSri Lanka Demands Compensation From Pakistan Over Brutal Mob Killing of Factory Manager