Sixth Night of George Floyd Riots: Unparalleled Unrest Boils Over Into Utter Destruction Across US 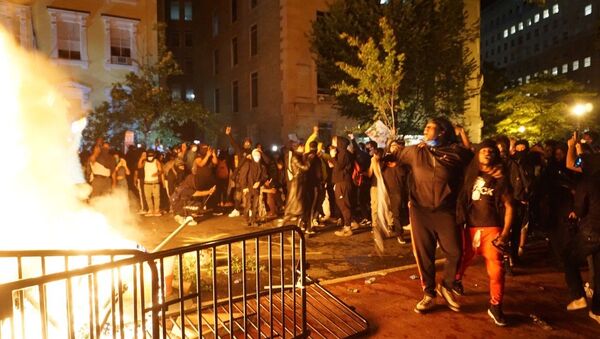 The worst civil unrest in decades erupted in cities across the US this weekend as anger sparked by the death of an African American man in Minneapolis police custody last Monday touched off riots nationwide and well beyond the country's borders.

Unparalleled civil unrest continued for a sixth consecutive night, sweeping across at least 75 US cities, as demonstrators have gone on decrying the death of black American George Floyd at the hands of the police. 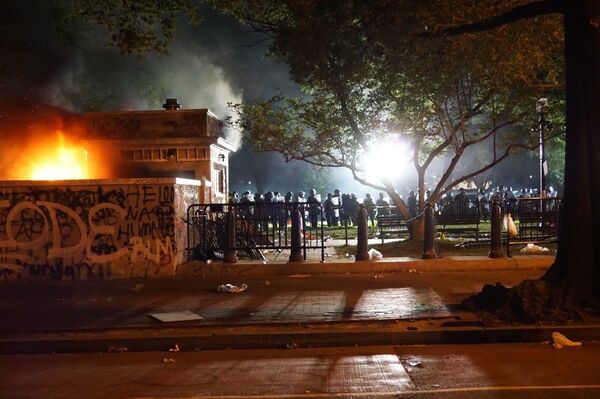 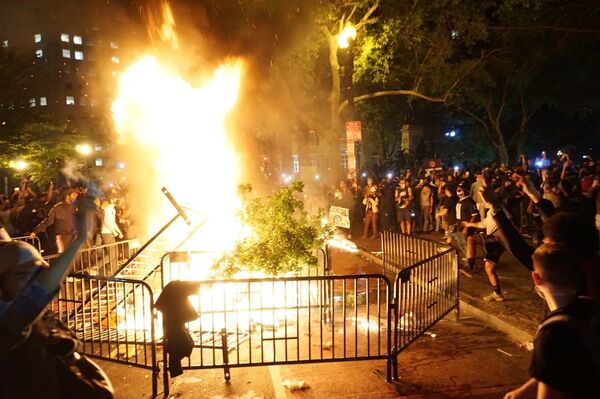 As a new wave of protests marked Sunday, Washington DC's historic St. John's Episcopal Church, which was opened in 1816, was set ablaze, with orange flames rising up into the air.

In Lafayette Park, located just in front of the White House, a protester set a US flag alight as demonstrators gathered to bemoan those killed by police brutality, including George Floyd, Breonna Taylor, and others. 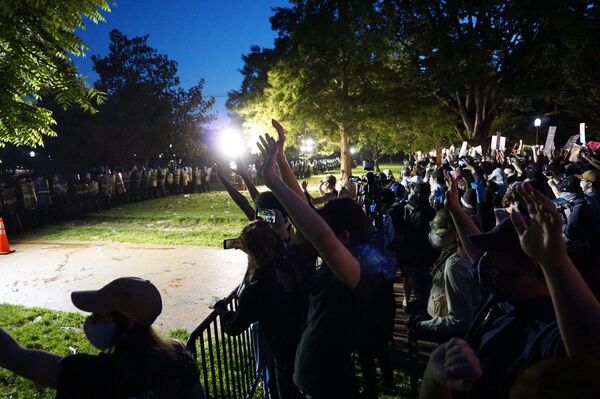 The fire grew into a massive blaze in the middle of the park, where people gathered and raised their fists in solidarity, while police could be seen closing in armed with plastic shields, bulletproof vests, and weapons. In numerous now-viral pictures, tear gas rises up into the air, as law enforcement attempts to restore order.

Also in close proximity to the White House, demonstrators could be seen flipping over a car, kicking it and smashing its windows. 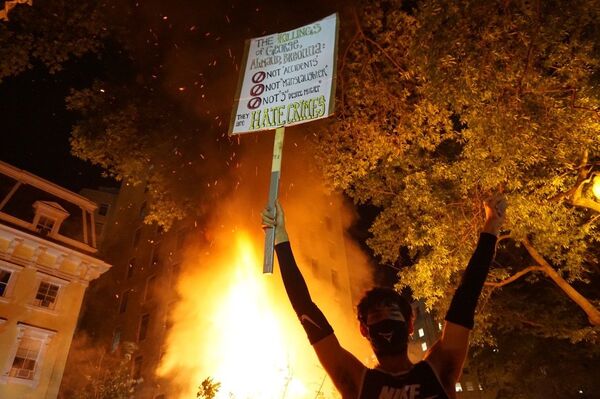 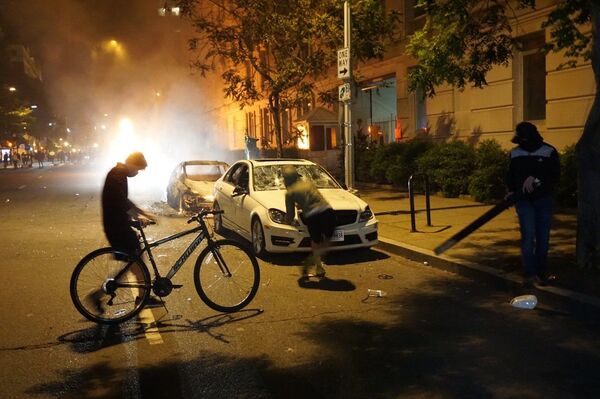 In Manhattan, lines of baton-armed police officers were seen wading into a crowd of demonstrators, while a car a short distance away was sent up in smoke on Sunday evening.

We walked over The Manhattan Beidge during the protest and let me tell ya- The Manhattan Bridge Spider-Man was just the best pic.twitter.com/uuVAKnghVE

In Boston, Massachusetts, protesters were seen clashing with police during the Sunday demonstrations, while in Philadelphia officials shut down whole parts of the city after peaceful daytime protests spilled into sheer chaos with arson and large-scale looting at night.

Wowwwww. A white man is caught throwing a brick or something to bust a place open and then runs away......... #BostonProtests pic.twitter.com/cxJTBUKJq2

In New York, using a fire extinguisher and creating a human chain, a group of protesters stopped looters from entering a closed business, a Tory Burch store. The civil unrest has resulted in mass lootings and arson across the US in the past few days. In some snapshots and videos circulated online, New York Police Department officers could be seen clashing with protesters on Sunday night, chasing them and flinging them to the ground.

Protests, riots and vandalism are spreading like wild fire across America. Woke Libs are upto something sinister #NewYork pic.twitter.com/lKEifjrQrn

Firefighters respond to NYPD van ablaze in New York as protests roil the city. At least 70 arrests have been made in New York tonight. https://t.co/ahHKWbg3V4 pic.twitter.com/plQhgD7Ggv

Protests, riots and vandalism are spreading like wild fire across America. Woke Libs are upto something sinister #NewYork pic.twitter.com/lKEifjrQrn

Thousands of National Guard troops patrolled major US cities in 15 states and Washington DC, with at least 40 cities introducing curfews to disperse the enraged crowds.

MILWAUKEE!! A city bus of national guard just unloaded at the MPD department on locust in the mist of the protests. BE SAFE!! pic.twitter.com/nEkxYN7juA

IF YOU ARE AT THE #SanBernardino PROTEST, LEAVE NOW THE NATIONAL GUARD IS HERE pic.twitter.com/rOH9XOScjV

Demonstrations were held outside the US as well, with hundreds gathering in protest over Floyd’s brutal killing on Trafalgar Square in London on Sunday afternoon.

After civil unrest and protests, Derek Chauvin, who suffocated Floyd to death while arresting him, has been charged with third-degree murder and second-degree manslaughter and he along with the three other officers who were present at the scene have been fired from the force.