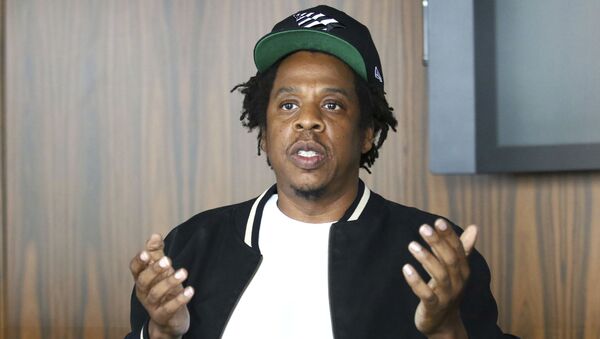 Muhammad Osman
All materialsWrite to the author
The murder of African American George Floyd by a Minneapolis police officer on 25 May, which has sparked protests in almost every major US city, has also prompted many US politicians, artists and public figures across the nation to call for justice over the tragic incident.

World famous rapper and record executive Jay-Z on Sunday discussed over the phone with Governor Tim Walz of Minnesota the progress of the investigation into the death of George Floyd, which has triggered nationwide demonstrations, Jay-Z and Walz revealed on Monday.

In an interview with CNN affiliate WCCO, the governor said that Jay-Z told him, “Justice needs to be served here”.

“It was so incredibly human. It wasn’t Jay-Z international celebrity, it was a dad and quite honestly a black man with visceral pain that he knew,” Walz said.

On Sunday, Walz announced that Minnesota Attorney General Keith Ellison would lead the probe into the fatal arrest of the 48-year-old black man.

In a statement released later on Monday by the REFORM Alliance, a non-profit organisation founded by Jay-Z advocating reform of the US criminal justice system, the superstar thanked the governor “for doing what's right” and for calling in Ellison to “take over the George Floyd case”.

“Earlier today, Governor Walz mentioned having a human conversation with me. A dad and a black man in pain. Yes, I am human, a father and a black man in pain and I am not the only one,” Jay-Z said. “Now I, along with an entire country in pain, call upon AG Ellison to do the right thing and prosecute all those responsible for the murder of George Floyd to the fullest extent of the law”.

The international rap icon also called for “every politician, prosecutor and office in the country to have the courage to do what is right”.

“This is just a first step. I am more determined to fight for justice than any fight my would-be oppressors may have,” Jay-Z added. “Have the courage to look at us as humans, dads, brothers, sisters and mothers in pain and look at yourselves”.

On Saturday, Jay-Z’s wife, Beyonce - an international icon in her own right - asked in a video statement for her 147 million Instagram followers to sign a petition “to demand more charges brought on all those involved in the death of George Floyd”.

If you want to demand more charges brought on all those involved in the death of George Floyd, click the link in my bio to sign the petition.

On 25 May, an African-American resident of Minneapolis named George Floyd was killed by a police officer while being arrested. The officer who killed Floyd, identified as Derek Chauvin, put his knee on the victim's neck and kept it there for over 8 minutes, even after Floyd gasped “can't breathe” and begged for air.

All four officers involved in the arrest and death were quickly fired after the incident, and three days later as protests spiraled out of control, Chauvin was subsequently arrested on third-degree murder charges.

The tragic has incident triggered ongoing nationwide demonstrations across the US and in many international cities.

000000
Popular comments
Honkytonk politicians pandering to various African Americans after historic protests & destruction. On any other day they could care less, as was demonstrated the day George Floyd was murdered. cnn affiliate? Nice PR stunt.

centr
2 June 2020, 05:40 GMT1
000000
He should use his fame to call on people to behave, protest peacefully, so that police, governments, and people do not have to fear them and they will not be treated like the beasts that they are behaving like.
Erikao
2 June 2020, 05:52 GMT1
000000
Newsfeed
0
New firstOld first
loader
LIVE
Заголовок открываемого материала
Access to the chat has been blocked for violating the rules . You will be able to participate again through:∞. If you do not agree with the blocking, please use the feedback form
The discussion is closed. You can participate in the discussion within 24 hours after the publication of the article.
To participate in the discussion
log in or register
loader
Chats
Заголовок открываемого материала
Worldwide
InternationalEnglishEnglishMundoEspañolSpanish
Europe
DeutschlandDeutschGermanFranceFrançaisFrenchΕλλάδαΕλληνικάGreekItaliaItalianoItalianČeská republikaČeštinaCzechPolskaPolskiPolishСрбиjаСрпскиSerbianLatvijaLatviešuLatvianLietuvaLietuviųLithuanianMoldovaMoldoveneascăMoldavianБеларусьБеларускiBelarusian
Transcaucasia
ԱրմենիաՀայերենArmenianАҧсныАҧсышәалаAbkhazХуссар ИрыстонИронауОssetianსაქართველოქართულიGeorgianAzərbaycanАzərbaycancaAzerbaijani
Middle East
Sputnik عربيArabicArabicTürkiyeTürkçeTurkishSputnik ایرانPersianPersianSputnik افغانستانDariDari
Central Asia
ҚазақстанҚазақ тіліKazakhКыргызстанКыргызчаKyrgyzOʻzbekistonЎзбекчаUzbekТоҷикистонТоҷикӣTajik
East & Southeast Asia
Việt NamTiếng ViệtVietnamese日本日本語Japanese中国中文Chinese
South America
BrasilPortuguêsPortuguese
NewsfeedBreaking
07:58 GMT'Dry Turkey' on 'Stolen Land': BLM Faces Twitter Backlash for Blasting Thanksgiving
07:25 GMT'End of an Era': Celebs Pay Tribute to Broadway Legend Stephen Sondheim
07:00 GMT'Thank God I Didn't Lose Any Teeth': Ovechkin Receives Stitches After Puck Blow to His Face
06:12 GMTNetizens in Grip of Guesswork After WHO Skips Two Greek Letters to Name New COVID Variant
05:55 GMTAustralia Halts Flights From 9 Southern African Countries Over Omicron Strain
05:24 GMTKanye West Says God Wants to Bring Him and Kim Together Again
05:10 GMTAs Indian Health Survey Suggests Women Outnumber Men Expert Claims 'This Isn't the Real Number'
04:50 GMTP&G Recalls Over a Dozen Old Spice, Secret Sprays After Detection of Cancer-Causing Chemical
03:47 GMTAlabama AG Threatens to Sue City Officials for Removing Confederate President's Name From Avenue
03:39 GMTOver 100 People Arrested in Solomon Islands After Riots in Honiara, Police Say
03:39 GMTMigrant Caravans in Mexico Head North After Slow Visa Processing by Authorities - Reports
03:34 GMTOutgoing UK Chief of Defense Staff Describes Russia as Most Acute Threat
02:59 GMTRussia, China Slam Idea of Summit For Democracy As It Contradicts Development of Modern World
02:30 GMTBoebert vs. 'Jihad Squad': GOP Rep. Buries the Hatchet With Squad's Omar Over Feud Caused by Remarks
01:53 GMT'As if Disney Were Entering Notre-Dame': Critics Blast Cathedral's 'Woke' Rebuilding Plan - Report
01:42 GMTMan Killed After Trying to Crash Gate of San Diego Military Base With Knife
01:07 GMTNew York Governor Declares State of Emergency Amid Spike in COVID-19 Infections
YesterdayPfizer Unsure if Omicron Evades Its Vaccine, Can Launch New One in 100 Days
YesterdayMusk Rails Against State Aid as Tesla Pulls Application for $1.28 Bln in Subsidies for Berlin Plant
YesterdayBiden Says Not Concerned About US Stock Market Plunge as He 'Expected It'