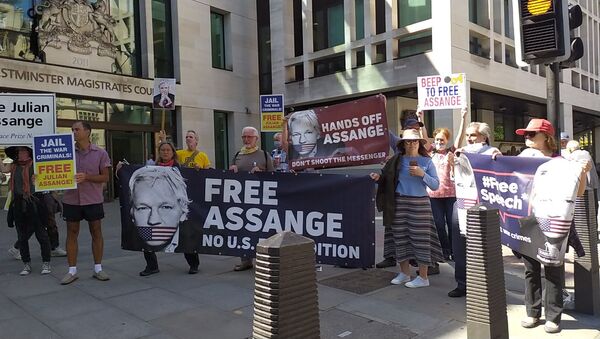 © Photo : Mohamed Elmaazi
Subscribe
Mohamed Elmaazi
All materialsWrite to the author
The second part of the extradition case of the WikiLeaks publisher has been delayed due to the COVID-19 lockdown. Though Judge Vanessa Baraitser refuses to grant him bail despite the threat posed to prisoners from the outbreak of the novel coronavirus.

Judge Vanessa Baraitser failed to inform the parties in Julian Assange's extradition case where part two of the hearings will be held during the latest call-over hearing at Westminster Magistrates' Court on 1 June 2020. The judge said that she had "hoped to be able to provide the name of the crown court that will hear the case but I am still awaiting confirmation as to where that will be".

Judge Baraitser had agreed with the parties that the WikiLeaks publisher's case would need to be delayed - from May to September - due to the inability of all the parties to be present in court amid the COVID-19 pandemic. She also agreed that it would assist everyone if a separate court venue could be found since Belmarsh Magistrate's Court had no availability in September. Although Judge Baraitser did note, towards the end of the hearing on 27 April, that the venue they ultimately find may be out of London.

At Westminster Magistrates' Court in Court 10 for #JulianAssange's latest hearing. We should learn today what the new venue is for Part 2 of #Assange's extradition hearing. pic.twitter.com/iUoj06XaMt

Mr Assange did not attend the hearing via video link. Edward Fitzgerald QC, acting for the defence, told the judge that a letter was sent to the court on Friday from Mr Assange's solicitor Gareth Pierce, noting that his history of respiratory problems mean that it was too dangerous for him to attend the hearing using the video link room in Belmarsh prison.

Julian couldn't attend today's hearing via video link due to his health and on advice from his doctor. The court was notified by lawyers on Friday that he wouldn't be able to attend for medical reasons. There has been no easing of the #COVID19 lockdown in Belmarsh @MartySilkHack

The judge had previously ruled that if prison officials determined it was safe then Mr Assange must attend the call-over hearings every 28 days, irrespective of the independent medical advice he received, unless he was "unwell". This is despite the fact that at least two prisoners in Belmarsh had died from COVID-19 by that time.

​​Judge Baraitser asked Mr Fitzgerald, who was attending via audio link, whether Mr Assange was unwell and he answered in the affirmative. She has refused to grant Mr Assange bail despite being told that he is at greater risk of sickness and death due to his history of respiratory problems. Mr Assange's next call-over hearing has been set for 29 June.

"It's ridiculous that we still don't have a time and a place for the remainder of the hearing" WikiLeaks Ambassador and section editor Joseph Farrell said.

He added that the delay "has been a punishment in itself. Whether Julian can get proper access to his legal team remains unlikely, as Belmarsh prison remains in full lockdown. And to add insult to injury the court is unable to provide reporters with the most basic levels of access".

The judge has repeatedly refused to assist Mr Assange's lawyers gain proper access to their client, since well before the COVID-19 lockdown, stating that she has no jurisdiction over his treatment by prison authorities. This has been disputed by Mr Assange's legal team.

A statement from the Don't Extradite Assange (DEA) campaign released after todayt's hearing said that the "audio link for journalists was unusable and the court proceedings inaudible so only the small numbers allowed in the court could hear". The process of trying to follow court hearings by remote audio during the lockdown was previously described as "farcical" by historian and journalist John Rees of the DEA.

If he is extradited to the US Mr Assange faces up to 175 years in prison on espionage related charges relating to his role in publishing classified US documents which revealed war crimes and other criminality perpetrated by US-led forces in Iraq, Afghanistan and US-occupied Guantanamo Bay, Cuba.

000000
Popular comments
Baraitser is a tribe member, and as such, she will do everything she can to exterminate someone like Assange and Wikileaks, who expose the criminal undertakings that they have done and continue to do. They much prefer that the goys be easily brainwashed and left uninformed, except for the lies that they disseminate via their controlled mainstream media.
andromeda
1 June 2020, 20:27 GMT3
000000
Where is the "no freedom, no peace" movement for JA? When they are finished with the people of courage they will move on to the cowards under any pretext imaginable. Orwell.