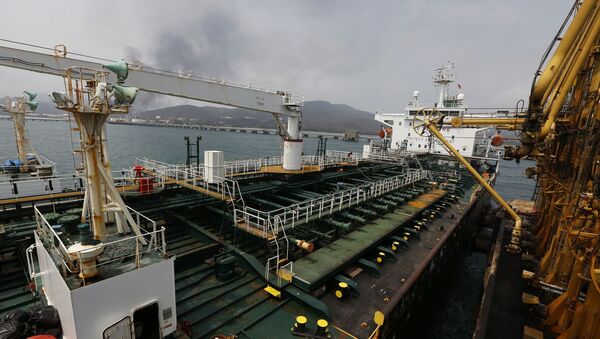 Oleg Burunov
All materialsWrite to the author
Last week, five Iranian tankers carrying fuel and oil refinery equipment arrived in Venezuela amid US warnings of fresh sanctions on both Tehran and Caracas.

Iranian Foreign Ministry spokesman Abbas Mousavi has signaled Tehran’s willingness to go ahead with its oil shipments to Venezuela if Caracas needs more such deliveries.

"Iran practices its free trade rights with Venezuela and we are ready to send more ships if Caracas demands more supplies from Iran", Mousavi told reporters on Monday.

The deliveries took place in the face of US warnings of fresh sanctions on both Tehran and Caracas, which was preceded by White House officials stating that there were no operations planned to stop Iranian tankers en route to Venezuela.

Before the tankers’ arrival in the South American country, The Wall Street Journal cited unnamed US officials as saying that the Trump administration is considering new sanctions and "other legal steps to disrupt Iranian oil exports to Venezuela", in response to what Washington sees as Tehran's attempts "to make inroads into Latin America".

Tehran Warns US Not to Intercept Venezuela-Bound Iranian Tankers

This followed Mousavi warning earlier in May that the US may "suffer repercussions that arise out of any unthinking measure [that it could take]" against Venezuelan-bound Iranian fuel tankers.

"Should the Americans take any measure against our vessels’ free and legal movement around, they would face our decisive response", Mousavi told reporters in Tehran.

He spoke after Tehran summoned the Swiss ambassador representing Washington's interests in the Islamic Republic to lodge a protest against the US Navy's alleged plans to intercept Iranian tankers. Deputy Foreign Minister Seyed Abbas Araghchi, for his part, described US efforts to resort to bullying in order to hamper international trade as a serious human rights abuse and a clear "act of piracy".

Maduro has, meanwhile, announced that fuel prices will go up in Venezuela as of 1 June, with gasoline due to be sold at 5,000 bolivars (2.5 US cents) per litre at gas stations nationwide.

"This is a war, my dear fellow countrymen who listen to me, a brutal war”, the Venezuelan president said in an address to the nation on Saturday, adding that the US is "persecuting any company that brings a drop of gasoline to Venezuela".

This followed Maduro's announcement that he had appointed a team of specialists from the government to implement a plan of gas distribution in Venezuela and review the price for imported fuel on the domestic market, which has been one of the lowest in the world due to government subsidies.