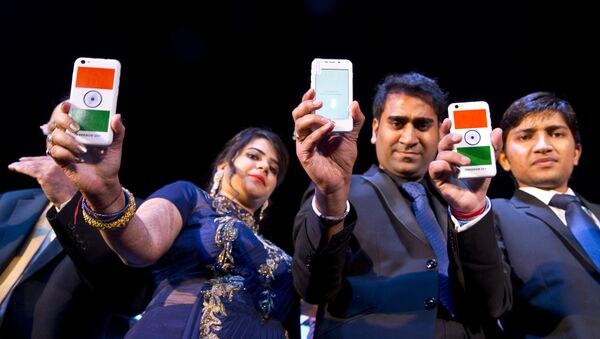 New Delhi (Sputnik): In previous years, India, where the number of smartphone users was expected to reach over 442 million by 2022, replaced the US and Vietnam to become the second largest handset market in the world, behind China. While last year around 158 million handsets were sold in India, the market is projected to shrink this year.

The handset market in India could witness a sales dive from previous estimates of 140-142 million to 130-137 million, the market research firms International Data Corporation (IDC) and Counterpoint – headquartered in the US and Hong Kong respectively – have noted.

The global economy is struggling to cope with the sudden business and trade halts caused due to the spread of COVID-19. Joining the wagon of losses, the smartphone market in India is expected to witness a decline of 13-15 percent.

The substantial slump is being pegged as the first ever year of decline in recent memory.

India is a major market and manufacturing hub for several Chinese companies like Oppo, Xiaomi, Vivo, and OnePlus.

The companies have been trying to facilitate production in India with 20-30 percent capacity. Given that India is the second largest market for smartphones in the world, ramping up the manufacturing of handsets and smartphone equipment could help the country revive its economy, but lesser staff and the fear of contracting the coronavirus among people is interfering with work in these large factories, the media has reported.

Earlier this month, Indian Prime Minister Narendra Modi urged the public to “go vocal for local”, soon after which a trend of banning apps made in China picked up in India.

Prominent Indian personalities like Sonam Wangchuk and others have been urging people to boycott Chinese products. However, the government, except for stressing upon having a self-reliant India, has not made any comment so far to indicate any alternate view on Chinese investment.

Several public figures in India, including the famed Ladakh region-based educationalist Wangchuk, along with Bollywood celebs like Milind Soman and Arshad Warsi, have also joined the movement of boycotting Chinese products.

​Taking its time regarding Chinese products, India has also delayed its 5G trials. A lack of home-made equipment and infrastructure for high speed Internet is another factor that would not have been an issue otherwise, because Chinese tech giants like Huawei and ZTE were allowed to participate in India’s 5G trials before the pandemic broke out.