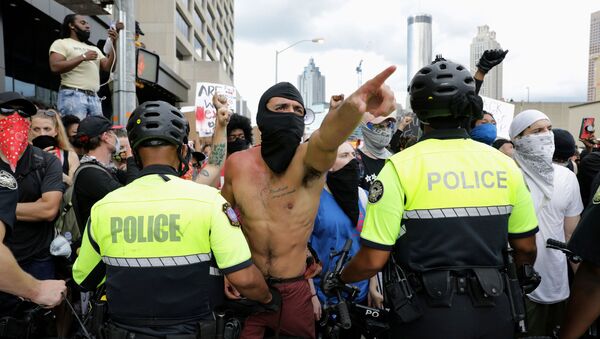 Tim Korso
All materials
US officials have been accusing Russia of being behind many of the country’s domestic scandals and issues, with the trend becoming apparent in 2016. Back then, the Democratic Party and its candidate blamed Moscow for their failure to win the presidential election, while not providing any evidence to substantiate the bizarre claims.

The spokeswoman for the Russian Foreign Ministry, Maria Zakharova, has reacted to an attempt by a former adviser to Barack Obama, Susan Rice, to shift the blame for the ongoing violent protests in the US onto Russia, calling such allegations unbelievable and "barefaced propaganda". On her Facebook page, Zakharova addressed Rice directly, condemning the US leadership's habit of playing "the Russia card" every time a disturbance occurs in American politics and they fail to properly cope with it.

Some time ago your party colleagues made a fatal mistake when they decided to blame absolutely everything that was not to their liking on Russia. Hillary Clinton and the Obama team convinced themselves and tried to convince the world that the domestic problems in the United States were created and encouraged by an external force: Russia.

You are repeating this mistake today together with a CNN reporter, using dirty methods of information manipulation, such as fake news and absolutely no facts to prove your allegation. Your interview with CNN is a perfect example of barefaced propaganda.

I would like to remind you that the social media, which you believe are being used by Russian agents to fuel protests in American cities, were registered in the United States, belong to Americans and are regulated by American laws.

Are you trying to play the Russia card again? You have been playing too long; please, come back to reality. Go out and face your people, look them in the eye and try telling them that they are being controlled by the Russians through YouTube and Facebook. And I will sit back and watch “American exceptionalism” in action.

Allegations of Russian Meddling in US Protests

During her interview with CNN, Rice defended the protests, while accusing unspecified "extremists" of trying to "hijack" the demonstrations and make them turn violent. She then went on to bizarrely claim that such tactics are "right out of the Russian playbook" and suggested, referring only to her "experience", that Moscow could be influencing the protests via social media or supporting extremists by "funding [them] in some way, shape, or form".

True to form when it comes to making such accusations against Russia, Rice did not provide any evidence to support her claims. 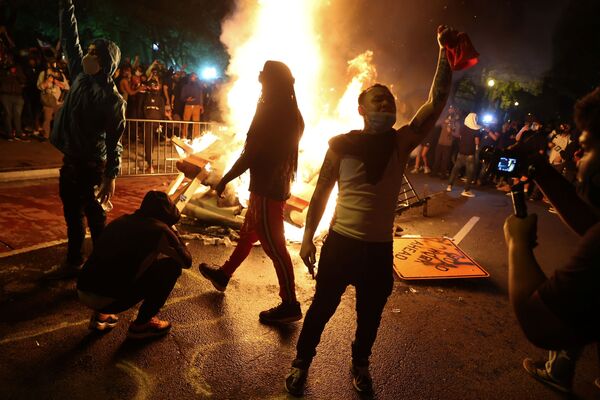 Protesters rally around a bonfire in the midst of protests against the death in Minneapolis police custody of George Floyd near the White House in Washington, U.S. May 31, 2020. Picture taken May 31, 2020.
© REUTERS / JONATHAN ERNST

The US-wide protests, which have frequently descended into violent riots accompanied by looting and vandalism, began in Minneapolis, Minnesota, after an African-American man, George Floyd, was killed as he was arrested by local police officers. One of the officers was seen putting his knee on Floyd's neck while the latter begged for air and repeatedly said that he couldn't breathe, before he eventually died due to suffocation. 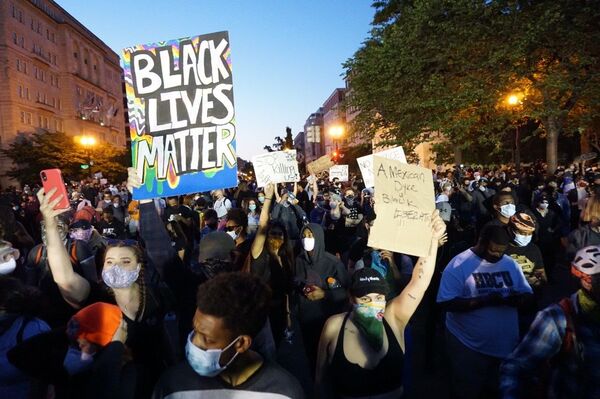 The incident sparked massive protests against police brutality and negligence towards the lives of African-Americans. In a bid to deal with the growing levels of violence, many governors and mayors, including in Washington, DC, have called in the National Guard or resorted to other measures, such as imposing curfews.

Tradition of Playing the 'Russia Card'

US officials, both current and former, have actively resorted to blaming Russia every time turmoil emerges in American politics. The trend became apparent during the 2016 presidential campaign, when the Democratic Party and its candidate, Hillary Clinton, accused Russia of meddling in the election and claimed that their opponent, now President Donald Trump, was conspiring with the Kremlin to rig the vote.

It took a three-year-long investigation to end the streak of baseless claims against POTUS and the Kremlin, when Special Counsel Robber Mueller released his report on the so-called Russia probe.

Despite this, the trend of portraying Russia as guilty of all mortal sins has not waned, as US officials have continued to accuse the Kremlin of interfering in American domestic matters. For instance, Democratic Speaker of the House Nancy Pelosi even suggested on one occasion that Russia had "a hand" in the Ukrainegate scandal that rocked the American political landscape last year and resulted in Trump's impeachment, but, as always, no evidence was presented in support of the allegations.