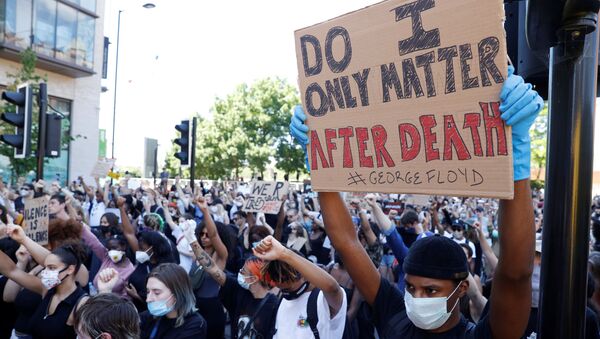 Different stars have expressed their regret with the current situation in the United States and urged an end to the violence.

The public unrest that first erupted in Minneapolis and later spilled over into other US cities following George Floyd's death in police custody, hasn't gone unnoticed by celebrities and artists. Many spoke out on their social media accounts about injustice, police brutality, and violence and K-pop stars were no different.

Jay Park, an American-Korean singer-songwriter, rapper, businessman, and producer has donated $10,000 to the Black Lives Matter movement. He urged that violence based on one's skin colour should not be ignored.

Sick of making post’s like this and sick of the same shit happening over and over again. Me being inspired by black culture aside me having black homies aside just as a man and a human being.. to think how helpless he felt and how inhumane he was treated... to think what if that was my dad, or uncle or homie makes me sick to my stomach. Countless INNOCENT UNARMED ppl losing their lives and nobody taking responsibility or being held accountable. Ppl who are supposed to protect and keep the public safe don’t even have the common sense or compassion to know if they are killing somebody innocent? Police Departments and Ppl in position of power not doing anything to provoke change.. all of it makes me sick... the whole system is corrupt... and nobody wants to admit it cause they are all afraid of taking responsibility for countless years of unjust inhumane treatment. Cant even begin fathom how fed up the black community is with so many years of abuse. I Pray to God the truth prevails and i Pray to God ppl who have compassion and empathy are put into a place of power and authority and ppl who abuse their power for their own greed and ego and to feel superior all disappear. Same for the civilians abusing their privilege calling the police and LYING. Act like some Fuckin human beings and may God have mercy on ur souls. #RIPGEORGEFLOYD

​A colleague from the record label AOMG, created by Jay Park in 2013, Park Jun-won, known to the public by his stage name PH-1, also joined the protest on SNS. The rapper signed a petition and donated $3,000 to the movement, expressing hope that “violence will not be an answer to anything".

i'm doing my best to help and support. pic.twitter.com/M9XJPv5Ru1

​Korean hip-hop and RnB singer Crush also supported the movement via SNS and helped a fund run by George Floyd’s brother Philonise Floyd with a donation, saying that every race should be respected.

Many artists and people around the world get so much inspiration by black culture and music including me. We have a duty to respect every race. 모든 인권은 존중 받을 권리가 있다고 생각합니다. #ripgeorgefloyd #blacklivesmatter

Jae, of K-rock band Day6, posted a link on Twitter to the Black Lives Matter's website and a screenshot of his donation to the Minnesota Freedom Fund.

Several other K-pop stars, such as Amber Liu and Tiger JK, displayed their concern about racism and supported the movement:

my first prayers this morning to George Floyd, and the movement of the people. one family 🙏🏽🕉 #BlackLiveMatter #solidarity

We must be the change. We must make sure we are heard. #BlackLivesMatter

​Mass protests erupted in various cities across the United States this week after George Floyd, an African American man, died in police custody on Monday. He was detained outside the Cup Foods corner store in Minneapolis on Monday evening, after a store clerk called the police claiming that Floyd had paid for cigarettes with a counterfeit $20 bill.

A video circulating online shows Derek Chauvin, a white Minneapolis police officer, pinning the unarmed Floyd to the ground with his knee; Floyd repeatedly says that he cannot breathe until becoming unresponsive. Chauvin has now been charged with third-degree murder and second-degree manslaughter. A total of four police officers have been fired in connection with the incident.