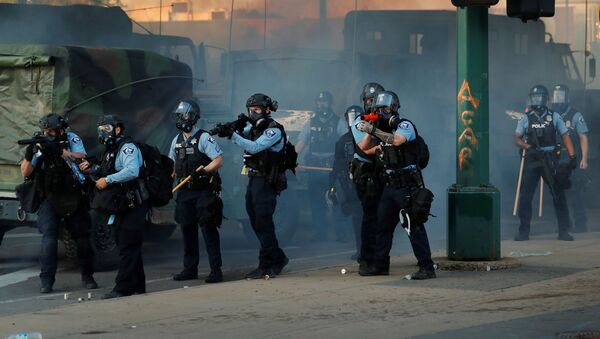 MOSCOW (Sputnik) - The Russian Embassy in the United States sent a note of protest on Sunday to the Department of State after a Minneapolis police officer pepper-sprayed RIA Novosti reporter Mikhail Turgiyev in the face.

"A note of protest has been sent to the State Department over this revolting incident. We demanded that they conduct a thorough investigation and inform us about its results", Ambassador Anatoly Antonov said in a statement to the press.

The journalist was attacked along with a crew of the VICE magazine after the protests were over. All journalists identified themselves as members of the press and did not resist police.

"Mikhail Turgiyev and American journalists who stood nearby were treated unacceptably by local police officers. Video footage from the scene shows that the media workers identified themselves loudly and clearly, had required markings on their clothes, presented their papers and did not resist", the ambassador said.

The Russian Foreign Ministry said earlier it was concerned about increasing police brutality and unjustified arrests of journalists covering protests that broke out in the United States after the death of black man George Floyd.

'@MFA_Russia: We consider it unacceptable for #US law enforcement officials to use special equipment - rubber bullets and tear gas - against media representatives after they present their press cards

Demonstrations have been non-stop across the US since Tuesday, with Minneapolis being the epicentre of citizens' outrage. At some point, protests became violent, with citizens smashing police vehicles, setting cars and municipal property on fire, and even stealing from local businesses.