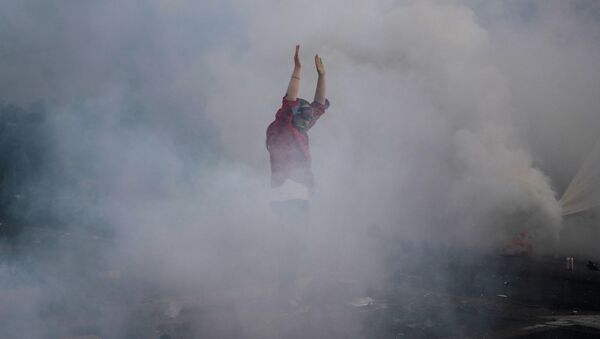 MOSCOW (Sputnik) - Moscow views the deliberate spraying of a tear substance by Minneapolis police at the face of a RIA Novosti correspondent as a manifestation of unjustified brutality, and considers the use of riot control weapons by US law enforcement officers against journalists to be unacceptable, the Russian Foreign Ministry said on Sunday.

"We are concerned about the growing police violence and unjustified detentions of journalists during their coverage of protests in the United States that broke out after the murder of George Floyd. We consider it unacceptable that US law enforcement officials use riot control weapons - rubber bullets and tear aerosols - against media representatives after they present a press card. In particular, we view the deliberate spraying of pepper aerosol by Minneapolis police officers at the face of RIA Novosti correspondent Mikhail Turgiyev, despite his identification as a journalist,  as a manifestation of unjustified brutality," the statement said.

The ministry called on competent US authorities and international bodies to properly investigate these incidents.

"We urge relevant international organisations and human rights NGOs to properly respond to this arbitrariness," the statement said.

Earlier in the day, Mikhail Turgiyev, a RIA Novosti correspondent, who himself was harmed while performing his duty, said that the police in the protest-hit Minneapolis had deliberately used pepper spray on a group of journalists.

According to him, the incident happened already after the protest was dispersed.

Rossiya Segodnya news agency on Sunday demanded an investigation into the use of pepper spray by a Minneapolis police officer on a RIA Novosti reporter.

"Rossiya Segodnya demands that US authorities thoroughly investigate this illicit police action, which violates both US laws on freedom of speech and information and international rules that protect journalists from violence," the statement read.

The news agency, which RIA Novosti is part of, said it wanted police officers, who arbitrarily pepper-sprayed the reporter covering unrest in Minneapolis overnight, to be brought to justice.

The nationwide protests erupted after a video from Minneapolis emerged online, showing George Floyd, a black man, pinned to the ground by white police officer Derek Chauvin, who was pressing his knee against Floyd's neck. Floyd was repeatedly telling the four officers involved in the arrest that he could not breathe until becoming unresponsive. He later died at a local hospital.

The officers were fired the following day, while Chauvin has now been charged with third-degree murder and manslaughter.

As protests have quickly morphed into rioting and looting, the National Guard has been called to the scene in a number of American states, and curfews have been imposed in several cities to curb the unrest.