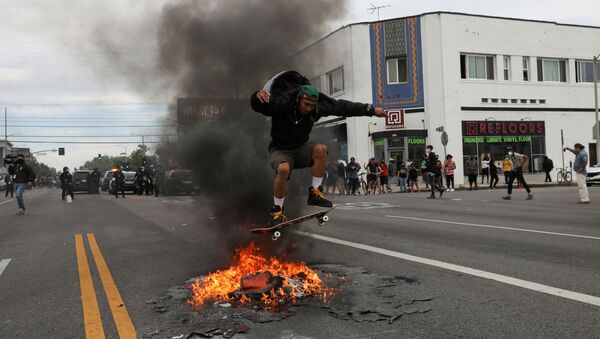 Protests in Los Angeles and a number of other cities in the United States have continued for several days in a row, erupting in violence, with vandalism and looting.

Los Angeles Mayor Eric Garcetti has declared a curfew in the city starting at 8 pm, as what were initially supposed to be peaceful demonstrations expressing sympathy over George Floyd's death developed into violent clashes with the police.

"Currently, the curfew will apply to downtown Los Angeles between the 110 fwy on the west, Alameda on the east, and 10 fwy on the south, and 101 fwy on the north between 8 pm. and 5:30 am", Garcetti said.

We will always protect free speech and Angelenos’ right to live without fear of violence or vandalism. To increase safety for demonstrators, law enforcement and all citizens of Los Angeles, we are putting a curfew in place from 8 p.m. to 5 a.m.
https://t.co/vy3XM760qb

​According to videos circulating on social media, protesters vandalised and smashed the windows of LAPD vehicles.

Around a dozen LAPD vehicles vandalized just behind the line of police and protestors. pic.twitter.com/DGEe6LbK25

IF YOURE AT THE PROTEST IN LA LEAVE NOW GET OUT OF THERE AS SOON AS YOU CAN pic.twitter.com/wap22tXh8q

A police car was set on fire in the centre of the city.

Over 500 rioters were arrested in LA on Friday. Footage online shows an officer trying to arrest a riot as he gets swarmed and beaten up by a crowd of other protesters.

Public unrest has been shaking the United States since Tuesday, after a video spread online showing white police officer Derek Chauvin pinning Floyd on his neck to the ground with his knee for several minutes. Floyd repeatedly told the police officer that he could not breathe until he became unresponsive. He died at a local hospital shortly thereafter.

The officer has been arrested and charged with murder and manslaughter.