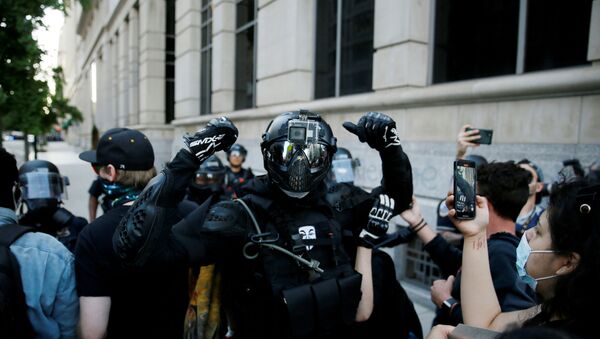 Protesters have hit the streets in Washington DC, Minneapolis, Philadelphia, Chicago, New York City, Los Angeles, and many other cities across the United States for a sixth day in over the death of black man George Floyd. Multiple clashes have been reported, with several officers killed amid the unrest, according to authorities.

Demonstrations have continued in Minneapolis after the National Guard dispersed protesters using tear gas and rubber bullets on Saturday.

Meanwhile, in Chicago, over 200 rioters were arrested and more than 20 officers injured on Sunday. In Washington DC, a curfew was imposed after hundreds of protested gathered in the centre of DC.

Hundreds of New Yorkers took to peaceful demonstrations in Manhattan, after between 300 and 350 arrests were made on Saturday.

Approximately 5,000 US National Guard troops are currently deployed in over a dozen US states, after governors asked for support amid the ongoing unrest.

The nationwide protests erupted after a video emerged online, showing Floyd pinned to the ground by police officer Derek Chauvin, before becoming unresponsive and later dying at a local hospital. According to a release by the Minneapolis Police Department, the man appeared to be under the influence and physically resisted officers when they tried to handcuff him. All four officers involved were fired, while Chauvin has now been charged with third-degree murder and manslaughter.

MOSCOW (Sputnik) - The Kremlin is following the news about the protests in the United States closely, but regards the matter as the country's domestic affair, presidential spokesman Dmitry Peskov said Monday.

"Undoubtedly, we follow closely what is happening in the United States, but what is happening there is the internal affair of that country, we have never interfered in the American affairs and are not planning to do that now", he told reporters.

MOSCOW (Sputnik) - Groundless claims about Russia's involvement in the currently ongoing unrest in the United States are nothing but dirty methods and manipulation of information, the Russian Foreign Ministry's spokeswoman, Maria Zakharova, said on Monday, commenting on a recent statement by ex-US National Security Adviser Susan Rice.

Zakharova said that the team of former US President Barack Obama was trying to persuade "the whole world" that the US' domestic problems were "created and aggravated by Russia".

"You are trying to repeat this mistake today, resorting, together with a CNN reporter, to dirty methods of information manipulation: fake statements and no facts to substantiate them. Your interview with CNN is propaganda", Zakharova wrote on Facebook. "Are you trying to use 'the Russian card' again? You have been playing for too long, come back to reality. Come to your people, look in their eyes and say that Russians are managing them via YouTube and Facebook".

Man Who Drove Truck Into Crowd of Protesters in Minneapolis Charged With Assault, Reports Suggest
06:02 GMT 01.06.2020

WASHINGTON (Sputnik) - Rallies in memory of George Floyd, an African American man who died in police custody in Minnesota, will continue until racism stops, a protester in Washington told Sputnik on Sunday, adding that the black community in the United States wants equal treatment.

"We are tired of the socio and economic pressure black people and people of colour have been going through in this country. So, we are doing everything that we can peacefully right now to make sure the president [Donald Trump] hears our message. All we want is equality … For too long, black people have been treated less like, we have been treated like nothing … We are out here because we are tired … Until the racism ends, this movement will not", the protester said in the midst of a rally in the US capital.

Sixth Night of George Floyd Riots: Unparalleled Unrest Boils Over Into Utter Destruction Across US
03:57 GMT 01.06.2020

MPD is currently responding to multiple fires intentionally set around the city, including at St. John’s Episcopal Church in the 1500 blk of H Street, NW, with @dcfireems . This church has been standing in our city since the early 1800s. Please avoid the area. https://t.co/8BeINZ5IYk

Protesters in Washington D.C. begin vandalizing the St. John’s church, which was eventually set on fire.

St. John’s church in DC has been set on fire 🤬

Thousands of demonstrators are gathered in Washington DC less than two hours ahead of the planned curfew, police have already used tear gas against the protesters, a Sputnik correspondent The Sunday evening protest in the US capital appears to be the largest George Floyd gathering in DC. The demonstrators have accumulated near the White House, in front of a fence that separates them from the police cordon, and are chanting "Don’t shoot."

Many of the demonstrators are holding signs saying "No Justice - No Peace" and "White Silence Is Violence." Some of the protesters threw water bottles and other objects at law enforcement officers who responded by using tear gas, according to the Sputnik correspondent.

At least 240 people were arrested in Chicago during the Saturday George Floyd protests, and more than 20 police officers were injured, according to Chicago Police Superintendent David Brown.

"We should be proud, proud of our police officers who stood shoulder to shoulder and showed great restraint amid these conditions," Brown said at a press conference, broadcast by Chicago police on Twitter. "Let me be clear, last night was not a protest. The people that came downtown were not there to exercise their First Amendment rights," Brown said.

According to the police chief, the protesters came out into the streets to loot and damage property. "This was a mob destroying everything in sight," Brown said.

According to Brown, Chicago police arrested at least 240 people on Saturday, after protests spread throughout the downtown area. More than 20 police officers were wounded, at least two of them sustained injuries that required hospitalization and surgery.

Brown said he had the support of Chicago Mayor Lori Lightfoot to use "every tool at our disposal to put an end to these violent acts."

Washington DC Mayor Muriel Bowser is imposing a curfew in the US capital starting from late Sunday until Monday morning amid George Floyd protests.

Mayor Bowser is ordering a citywide curfew for the District of Columbia from 11:00 p.m. on Sunday, May 31, until 6:00 a.m. on Monday, June 1. She has also activated the DC National Guard to support the Metropolitan Police Department.

Police arrested 23 people in London on Sunday during a demonstration in front of the US embassy where people gathered to show solidarity with George Floyd protesters across the United States, London's Metropolitan Police Service said.

The total number of arrests following gatherings in central London today is now 23, all for various offences.

They remain in police custody.

The majority of those who attended have now left the area.

Arizona declared a state-wide curfew and emergency for a one-week period amid ongoing anti-racism protests across the United States after an unarmed African American man, George Floyd, died in police custody in Minnesota, Arizona Governor Doug Ducey said on Sunday.

At the request of local leaders and in coordination with state and local law enforcement, I’m issuing a statewide Declaration of Emergency, with a curfew in place starting at 8:00 p.m. tonight and effective for one week. 1/

Atlanta and Chicago in the United States extended night curfews on Sunday continuing through the next day's sunrise.

Meanwhile graffiti protesting the killing of George Floyd can now be seen on streets all over Berlin Kreuzberg and Neukölln https://t.co/4WQV1qAuNl pic.twitter.com/wglmkdYklw

Hundreds gathered for #BlackLivesMatter protest at Trafalgar Square. Everyone kneeling, chanting ‘No justice, no peace’ ✊🏻 pic.twitter.com/s6FO9Pl6yX

Trump to Designate Antifa as Terrorist Organisation, Urges States to Use National Guard to Stop Them
18:05 GMT 31.05.2020

We cannot simply go back to the place we were before. That place is not good enough. If we do not fix the systemic issues, we will be back to a point with our communities on fire, our security and safety in question, and a searching for who we are.

Minnesota consistently ranks highly for our public schools, innovation and opportunity, and happiness - if you’re white. If you’re not, the opposite is true. Systemic racism must be addressed if we are to secure justice, peace, and order for all Minnesotans.

A New York Police Department officer was caught on camera on Sunday pulling down a peaceful protester's mask and pepper-spraying him in the face as he stood with his hands up.

Inexcusable. My God. A police officer who tear gases a civilian whose hands are up does a dishonor to his colleagues and his city and needs to be brought to justice. https://t.co/zYvEKidJtQ

MOSCOW (Sputnik) - A reporter with the RIA Novosti news agency, who was pepper-sprayed overnight by police in the US city of Minneapolis, said Sunday he was doing fine.

"Everything is OK. The burning sensation is gone. No damage has been done to the eyes", Mikhail Turgiyev said.

The journalist was attacked along with a television crew of the VICE magazine after protesters were dispersed. He said he had identified himself as a member of the press.

The Russian Foreign Ministry said this act of police brutality was uncalled-for. Minnesota Gov. Tim Walz later apologised to all journalists who were assaulted during what was the fifth night of violence in Minneapolis sparked by the death in custody of unarmed black man George Floyd.

"Protesting such brutality is right and necessary. It’s an utterly American response. But burning down communities and needless destruction is not. Violence that endangers lives is not. Violence that guts and shutters businesses that serve the community is not",  Joe Biden, a former US Vice President and the presumptive Democratic presidential nominee for the November election said in a statement.

The politician called on US citizens to use their pain and anger to bring the country to "the next phase of progress, inclusion, and opportunity for our great democracy".

"I would liken it to 'hijacking' a peaceful demonstration."

"We have a number of protests scheduled for today."

MOSCOW (Sputnik) - US President Donald Trump's national security adviser Robert O'Brien denied on Sunday that there was "systemic racism" in the police force.

"No, I don't think there's systemic racism. I think 99.9 percent of our law enforcement officers are great Americans", O'Brien said on CNN's State of the Union show.

He argued that there were some "bad apples" among police officers who were racist, giving the impression of widespread racism among police forces.

Richmond , Va protest the confederate statue is planned to come down . pic.twitter.com/SObyZM1974

See some of my pictures of the Confederate monuments in this tweet from early this morning #GeorgeFloyd #BlackLivesMatter #Richmond pic.twitter.com/0kgoglyEtq

Moscow Strongly Condemns Use of Riot Control Weapons Against Reporters by US Police
13:27 GMT 31.05.2020

"We're not going to federalise the Guard at this time", Robert O'Brien told reporters. According to him, the decision on the issue should be up to governors and mayors.

MOSCOW (Sputnik) - A police officer was stabbed in the neck during a George Floyd protest in the US city of Jacksonville, CNN reported on Sunday, citing the local sheriff.

According to Jacksonville Sheriff Mike Williams, the officer was "stabbed or slashed in the neck and is currently in the hospital".

Williams added that rioters threw rocks and bricks at other law enforcement officers during the protests late on Saturday and that many protesters had been detained.

Jacksonville Mayor Lenny Curry, in turn, told reporters that the protest initially began as a peaceful sit-in with about 1,200 people, but turned violent after respectful families left.

"We're not going to tolerate it in our city or let our city burn to the ground", Curry was quoted as saying by CNN.