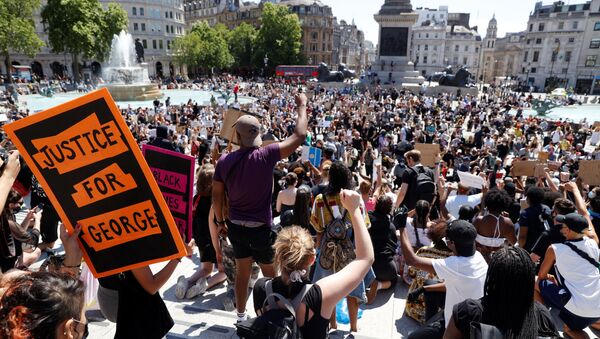 Brits have been circulating protest posters on social media, announcing demonstrations for the coming week, as US states have increasingly been taking top security measures to ease social unrest in the wake of an unarmed black man's killing in Minneapolis.

Hundreds of demonstrators have broken lockdown rules in Britain gathering in London’s Trafalgar Square in support of US protesters in their rage against the killing of a black man by a Minneapolis police officer last Monday.

In footage posted online, several hundred people can be seen standing outside the National Gallery chanting "I can't breathe” in reference to George Floyd’s last words, as he was being suffocated to death by now ex-officer Derek Chauvin.

People wore masks, and visibly tried to be practicing social distancing as much as they could, as they held placards featuring slogans "Black Lives Matter" and "Say his name, GEORGE FLOYD".

In another video, hundreds can be seen kneeling for George Floyd - a move known to have been made by American football player Colin Kaepernick, who notoriously knelt for other two victims of police brutality, Terence Crutcher and Keith Lamont Scott from 2016. A small group in Trafalgar Square copied Kaepernick and knelt for Floyd, chanting "No Justice, No Peace", raising a gripped fist to the sky, purportedly referring to Minnesota police’s slow response to Floyd’s horrid death. 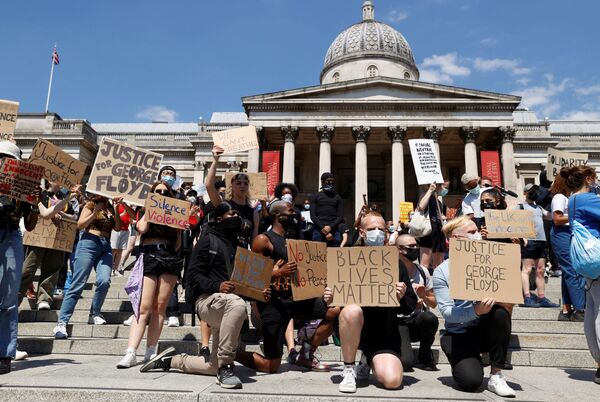 Independently, posters of would-be UK protests popped up on social media on Saturday, announcing demonstrations planned for the coming days. Massive riots have swept across the US after African American George Floyd, died in hospital followng the now ex-police officer kneeling on his neck for 8 minutes, despite George’s pleas to let him breathe.

What has been deemed as a racially-charged murder by many has seen crowds take to the streets all across the US in protests against police brutality, and impunity of law enforcement at large. At least 25 cities across 16 US states have now imposed curfews in response to the nationwide protests, with many states including Minnesota, California, Ohio, etc. resorting to the National Guard to restore public order.