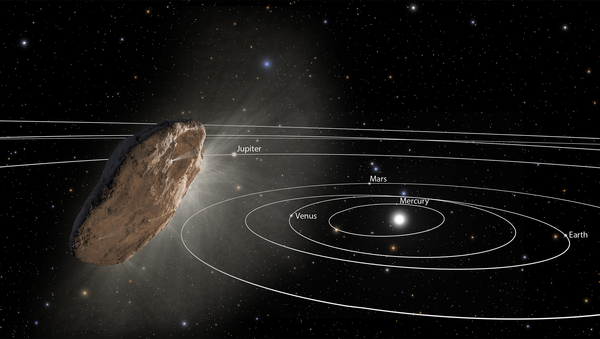 © NASA . NASA/ESA/STScI
Subscribe
The 2017 interstellar guest’s hydrogen build-up would correspond to the fact that no water or carbon dioxide compounds were detected on its surface, while hydrogen ice molecules would be too small to be traced by even the most advanced optical space technologies.

As per a new study soon to be published in The Astrophysical Journal Letters, the famously baffling comet Oumuamua originated within a mammoth molecular cloud from which it split and drifted away as if it were an iceberg.

The research, first reported by the magazine Wired, assumes that despite the said molecular clouds being best known as nurseries for stars since they stretch for light years across, they could also produce these kinds of interstellar icebergs.

The study went on to reveal that because the clouds would have once been cold enough for hydrogen to freeze, the comet could be composed of molecular hydrogen ice, which would also account for its extraordinary cigar-like shape.

"Even though the hydrogen iceberg thing is a little exotic, it explains every single mysterious thing about Oumuamua”, the paper's co-author, Darryl Seligman, explained to Wire.

Seligman specifically brought up a separate aspect of his team’s theory, which excited them the most - one that explained why it appeared to be accelerating beyond what would be caused by the force of gravity. According to a now common belief, Oumuamua’s acceleration was caused by so-called out-gassing, typically revealed through the emergence of such compounds as carbon dioxide and water. However, researchers failed to detect these on the puzzling comet’s surface.

In the case of Oumuamua, out-gassing could perhaps be composed of pure molecular hydrogen, which wouldn’t be detected even by existing top-notch high-resolution telescopes.

The proposed theory appears to also give a clue to Oumuamua’s legendary shape: cosmic radiation would have chipped away at it from different directions, accounting for its oval, cigar-like form.

An April paper in Nature Astronomy on the origins of Oumuamua, which shot through our solar system in 2017, suggested that the object could in fact be transporting the building blocks of life from across the universe. The new study by astronomers Yun Zhang and Douglas N.C. Lin did not, however, rule out the hyperbolic asteroid’s alien nature, suggested by Harvard astrophysicist and cosmologist Dr Abraham "Avi" Loeb.

In 2018, Loeb assumed that Oumuamua might in fact be an alien-designed carrier vessel, citing its apparently mysterious ability to change speed - a property that piqued curiosities since the reddish asteroid was seen transiting our solar system, from 14 October 2017 until 2 January 2018, after which it became too dim to detect even with the most advanced telescopes.

000000
Popular comments
Jana, What kind of nonsense are you waffling on about? DH!