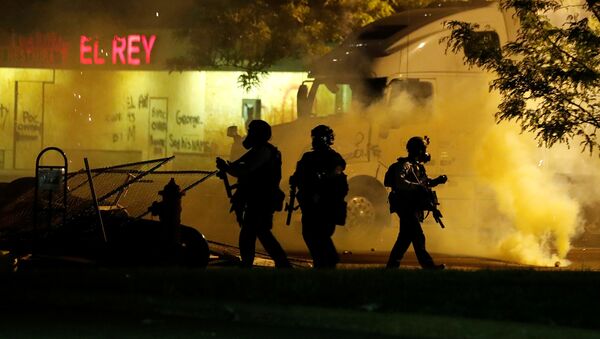 Protests over the death of an unarmed black man in police custody continued into fourth night on Friday, with the mayors of Minneapolis and neighbouring St. Paul issuing citywide curfews to contain rioters.

The Pentagon has told the Army to put several active-duty military police units on alert to go to protest-ravaged Minneapolis, the Associated Press reports, citing sources familiar with the order.

It is understood that the order applies to a total of 800 troops based at four military installations: in North Carolina, New York, Colorado, and Kansas.

The units would be deployed under the Insurrection Act of 1807, which was last used to suppress the racially-charged 1992 Los Angeles riots.

Trump reportedly made the request to put troops on the ready during a phone call on Thursday night, asking Secretary of Defence Mark Esper for rapid deployment options should the Minneapolis protests continue to spiral out of control.

What forces have already been called up?

A Pentagon spokesperon said that Walz had not requested the deployment of military police.

Earlier in the day, President Trump accused the Democrat governor of a "total lack of leadership" and threatened to involve the military more deeply in the riots.

What is going on in Minneapolis?

Minneapolis has been rocked by widespread protests for four consecutive days in the wake of the Monday death of George Floyd. The 46-year-old black man, who was detained on suspicion of passing a fake $20 bill, died after white police officer Derek Chauvin kneeled on his neck for about eight minutes.

A video of the incident filmed by bystanders, which showed that Floyd was unarmed and pleaded for air, has gone viral and fuelled racial tensions.

Protesters took to streets to demand that Chauvin and three other cops who participated in the detention be arrested and prosecuted.

All four were fired, but not charged on Tuesday, and the protests quickly descended into violence and vandalism, with vigilantes clashing with police, looting stores, burning down buildings and torching the police precinct were the four cops had worked.

On Friday, Chauvin was arrested and charged with third-degree murder and manslaughter.