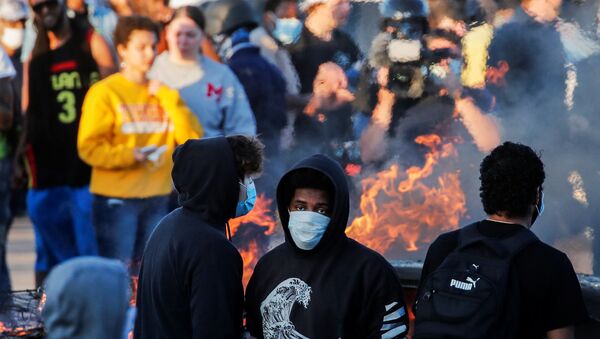 © REUTERS / CARLOS BARRIA
Subscribe
Looting, arson, and vandalism have been widespread across Minneapolis after a black man, George Floyd, died on Monday after being tackled and pinned to the ground by police responding to a call by a local grocery store, after Floyd allegedly tried to make a purchase with a counterfeit bill.

Minneapolis has become the scene of widespread looting and arson, with Minnesota Governor Tim Walz activating the state's National Guard amid protests and riots in the wake of the death of a 46-year-old black man, George Floyd, on Monday, at the hands of police.

The governor of #Minnesota Tim Walz declares a state of emergency and deploys the the #NationalGuard as the looting continues in #Minneapolis...🙄🙄 pic.twitter.com/brYlyV3G3L

​US President Donald Trump has pledged assistance from the military to quell the ongoing unrest in Minneapolis, if local authorities are unable to bring the city under control.

Videos have been circulating the internet, showing the scale of riots and looting that were triggered by the incident.

​African-American George Floyd who was tackled by several police officers before being pinned to the ground and later dying in police custody on Monday.

The arrival of the police had been sparked by a call from a local grocery store, claiming Floyd had tried to pay for his purchase with an allegedly counterfeit $20 bill.

The Minneapolis Police Department subsequently said in a press release that the officers who arrived at the scene found Floyd sitting on top of a car and appearing to be under the influence.

The release added Floyd physically resisted officers when they handcuffed him, noting that he appeared to be suffering from medical distress.

Footage of the police tackling the man went viral online, setting off a wave of protests in Minneapolis, and have since been ongoing for a third consecutive night.

What is it about looting or destroying their own neighborhoods/livelihoods of those in their communities who run these businesses that makes what happened any better?

It’s like cutting off your nose 👃🏻 to spite your face.#Minneapolis #Minnesota pic.twitter.com/u1caakS4Fe

I had to take a peak at what’s going on in my actual city tonight. Didn’t stick around long, but I’m sure it’s a lot worse now than a little bit ago https://t.co/AtO96nmkvG #brooklyncenter #looting #minneapolisriots #minnesota

Breaking: Multiple structures are now engulfed in flames as riots continue in Minneapolis, Minnesota. Looting is now widespread in the city, with reports of looting miles away from the original protest location. pic.twitter.com/Mz6Y6Rcepo

​Protests deteriorated into uncontrolled looting, of retail stores, as well as an attack on the Minneapolis Police Department’s 3rd precinct headquarters, where the responding officers, who have since been fired, worked.

The fire at the MPD’s 3rd Precinct was only at one corner 5 minutes ago. It’s now spread across the entire building. With no firefighters on scene... that building will likely be destroyed tonight. pic.twitter.com/t6p3Yv1KYV

This is the 3rd Precinct of the MPD. The fire at the corner is growing. pic.twitter.com/yA0J0l0Ebz

​Police have been responding to the protests with prolific use of tear gas and nonlethal ammunition.

According to Minneapolis Mayor Jacob Frey, the four police officers involved in Floyd’s arrest have been fired, with the official adding that the officer with his knee on Floyd’s neck should be placed into custody.