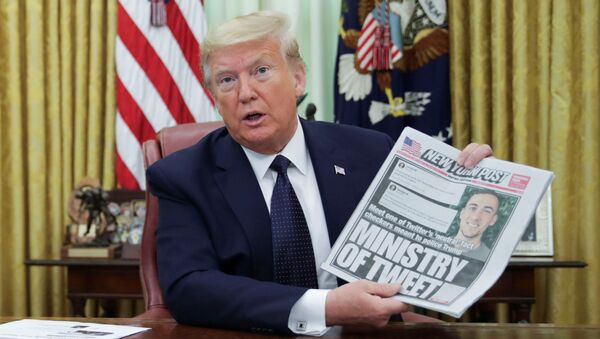 The executive order followed recent move by Twitter to flag Trump's tweets on mail-in voting with "fact-checks", which the president viewed as another attempt to silence conservative voices.

The Twitter company decided to hit back at President Trump calling the Executive Order concerning social media a "reactionary and politicised approach to a landmark law".

The company tweeted on late Thursday that the order infringes on freedom of speech on the Internet.

​The tweet, however, got a wave of replies, with users suggesting that while the principle the company is supporting is a positive one, it would also be good if censorship on Twitter was not selective.

I agree, but it'd be nice if you guys would also stop censoring conservatives at the same time. You know, do what you preach, and all.

Twitter censorship isn’t doing much for free speech either.

​There were also netizens who argued that "fact-checking" was not actually an act of censoring speech and even suggested Trump should delete his account on Twitter if he did not abide by their policy.

Fact checking is not censorship. His comments were not modified in any way. If he doesn’t like it, he can delete his account. Free market principles at work.

Stop giving him a platform. If he doesn't want to play by the rules, he doesn't have to have an account. Twitter will survive without Donald Trump.

Another user protested that by doing so, it would make Twitter a publisher and not a social media platform where users are invited to speak their minds.

On Thursday, President Trump signed an executive order calling for a series of legislative and legal actions to prevent popular social media platforms from policing their users' content.

"There is no precedent in American history for so small a number of corporations to control so large a sphere of human interaction", Trump said in explaining the move. "Currently social media giants like Twitter receive an unprecedented liability shield based on the theory that they are a neutral platform, which they are not, not an editor with a view point."

Trump took to Twitter on Wednesday to share his concerns about mail-in voting that, according to him, would potentially lead to fraud in the November election. Moments later, Twitter placed warning labels saying "Get the facts about mail-in ballots" on his tweets, which led to a curated page with links and summaries of articles of mostly liberal-leaning newspapers, describing how Trump's claims on mail-in ballots are unfounded.