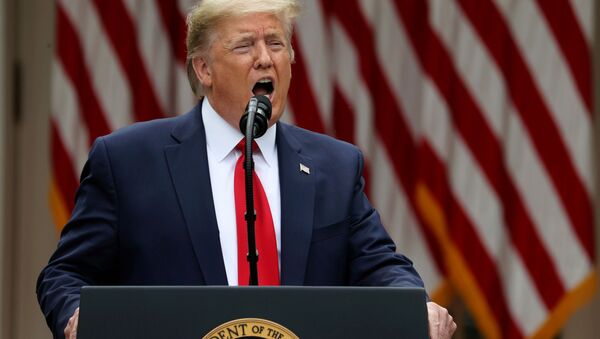 During a Friday news conference at the White House, US President Donald Trump declared that "Hong Kong is no longer sufficiently autonomous to warrant the special treatment that we have afforded the territory" and is therefore subject to a number of restrictions.

"We will be revising the State Department’s travel advisory for Hong Kong to reflect the increased danger of surveillance and punishment by the Chinese state security apparatus," Trump noted. He added that "necessary steps" will be taken to sanction mainland Chinese and Hong Kong officials "directly or indirectly involved in eroding Hong Kong's autonomy."

The US president asserted China was "smothering" Hong Kong's freedom and "broke their word to the world on ensuring the autonomy of Hong Kong."

Trump's comments concerning Hong Kong's autonomy come just a day after US Secretary of State Mike Pompeo made a similar assertion to Congress.

Today, I reported to Congress that Hong Kong is no longer autonomous from China, given facts on the ground. The United States stands with the people of Hong Kong.

Pompeo argued that "Hong Kong does not continue to warrant treatment under United States laws in the same manner as US laws were applied to Hong Kong before July 1997."

This position follows the Chinese parliament's passing of a resolution to draft a security law that would prohibit secessionism in Hong Kong.

The UK, Canada and Australia have also expressed condemnation of the legislation and, in a joint statement on Friday, declared that China's "new national security law on Hong Kong lies in direct conflict with its international obligations under the principles of the legally-binding, UN-registered Sino-British Joint Declaration.”

In connection with the joint declaration in 1997, Hong Kong agreed to draft and adopt its Basic Law "mini-constitution" to ensure the region would maintain its own economic, legal and legislative systems for a period of 50 years.

China has called on foreign countries, such as the US, to "immediately stop meddling with Hong Kong affairs and China's internal affairs as a whole."

"Otherwise, it would only meet with firm opposition and strong countermeasures from the 1.4 billion Chinese people, including our Hong Kong compatriots," warned the spokesperson for the Commissioner's Office of the Ministry of Foreign Affairs in China.