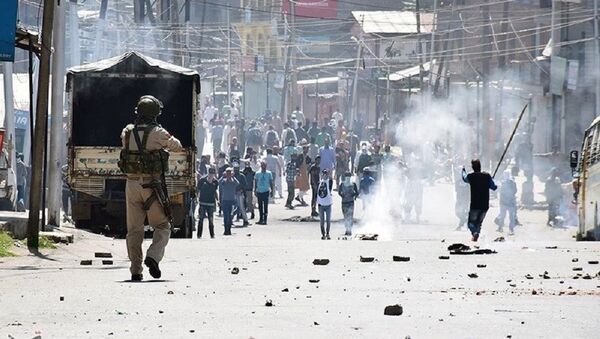 New Delhi (Sputnik): Thanks to intelligence inputs, Jammu and Kashmir police along with the Army intercepted militant groups that were planning to launch a suicide attack against security forces using an explosive-laden car on 28 May. While the terrorist plot was successfully foiled by the security forces, the driver of the car fled the scene.

Hidayatullah Malik, a militant from the terrorist organisation Hizbul Mujahideen was the owner of the explosives-laden car which was used for a botched bomb attack in Pulwama on Thursday, Jammu and Kashmir police confirmed on Friday.

According to police, Hidayatullah Malik is a resident of Sharatpora in Shopian, South Kashmir and joined the terrorist group in July 2019.

“The Santro car which was used for IED belongs to Hidayatullah Malik, an active Hizbul Mujahideen militant who is a resident of Sharatpora Shopian. He had joined the militant ranks in July last year,” a senior police officer said.

On 28 May, the Indian Army along with state police foiled an attempt by terrorists to carry out a 2019 Pulwama-like vehicle attack on security forces in the Pulwama district of Kashmir. The police established checkpoints at various places to detain the car, which was moving with 45 kg of explosives.

"We had an intercept of a terrorist. When the car was intercepted after an initial exchange of fire, the terrorist escaped under cover of darkness," state police chief Dilbag Singh said.

The army later released the drone footage of the controlled explosion carried out in a secluded area to defuse the explosives.

Indian security forces carried out a controlled explosion in Pulwama after they thwarted a suicide bombing with timely inputs.#Pulwama pic.twitter.com/LMfWsQYJA5

Indian intelligence has found more leads to such attacks being prepared and planned against the security forces. Nearly 4-5 IED attacks are being planned by a group of terrorists in Sopore, in Baramulla district and a vehicle-borne IED or suicide attack is also being planned on the stretch near Pantha Chowk, Srinagar, as per intelligence reports sourced by Sputnik.

Last year, on 14 February, at least 40 troops from the Central Reserve Police Force were killed in a suicide bombing in the same district. India accused Pakistan of harbouring the attackers - which Islamabad denied, and in retaliation, the Indian Air Force bombed a suspected camp of the terrorist group Jaish-e-Mohammed in Balakot, Pakistan.