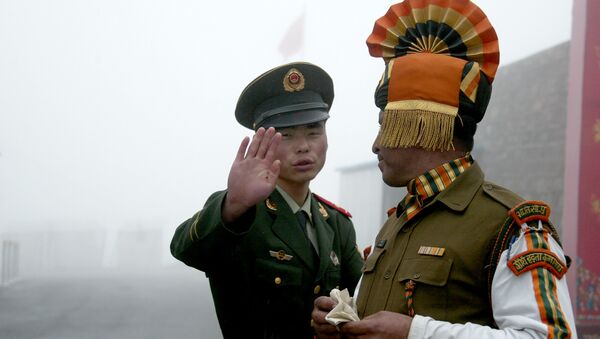 BEIJING (Sputnik) - Beijing and New Delhi do not need US mediation in the border dispute between the two countries, Chinese Foreign Ministry spokesman Zhao Lijian said at a briefing on Friday.

"Beijing’s position on the Sino-Indian border issue is clear and unchanging ... At the moment, the overall situation on the border of China and India is stable and under control," Zhao told reporters.

The diplomat added that China and India had their own mechanisms and communication channels for resolving the crisis.

"We are able to properly resolve bilateral [border] issues through dialogue and consultations, we do not need third-party intervention," the spokesman noted.

US President Donald Trump said on Wednesday that the United States had informed India and China of its willingness to mediate the decades-long border dispute. Trump also said the next day that he had contacted Indian Prime Minister Narendra Modi, who seemed to not be in a "good mood" over the "big conflict" with China.

Last week, Indian media reported that New Delhi and Beijing had deployed additional troops to the border area in Ladakh, a region administered by India as a union territory, following violent face-offs that took place from May 5-6, when roughly 250 Indian and Chinese troops engaged in clashes on the northern bank of Pangong Lake in Ladakh, an area that has been under dispute between Pakistan, India and China for decades. Soldiers on both sides suffered injuries, and clashes have continued in recent days.

The two countries in South and East Asia do not have a marked border but rather a so-called Line of Actual Control, which was created after the 1962 war between the nations and has resulted in numerous border conflicts over the decades that followed.