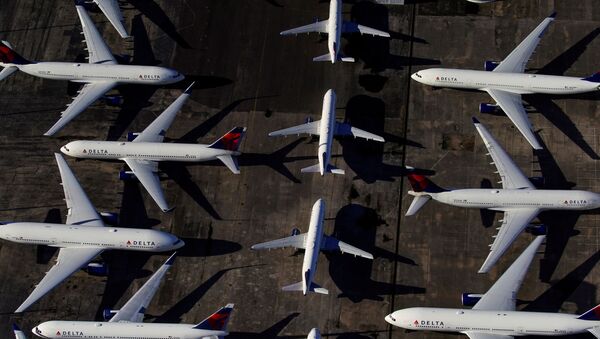 © REUTERS / Elijah Nouvelage
Subscribe
A wave of bankruptcies has hit the aviation industry as airlines suspended entire routes and grounded most of their fleets because of worldwide travel bans. Here's who hasn't managed to wait out the storm.

From the United States to Latin America and from Europe to Australia, the airline industry was among the first sectors of the economy to take a hit from the coronavirus pandemic.

The industry's debt is expected to rise by more than a quarter to $550 billion by the end of this year, according to the International Air Transport Association.

And while governments have provided at least $123 billion to the world's airlines and stopped many companies from falling into bankruptcy, a number of them were still forced to go under and more could follow.

Latin America's largest carrier and several of its affiliates filed for Chapter 11 bankruptcy protection (a court-supervised restructuring and search for new investors rather than a sell-off of assets) in the United States on Tuesday. The filing notably includes its businesses in Chile, Ecuador, Colombia, Peru, and the US, but does not affect affiliates in Argentina, Brazil, and Paraguay.

The Chile-based airline, which saw a 95-percent drop in its passenger service and lost most of its operating revenue because of the pandemic, said it would keep operating passenger and cargo flights during the reorganisation.

LATAM was the industry's biggest, but not the first victim of the coronavirus in Latin America. Colombian carrier Avianca filed for bankruptcy on 10 May after accumulating $50 million in overdue debt and missing a $66-million debt repayment.

Avianca, which was struggling financially before the onset of the pandemic, suspended most operations by the end of March, causing a 80-percent drop in revenue. The company said it would continue flying during and after the bankruptcy proceedings.

The South Florida-based charter airline went out of business on 8 May, six weeks after filing for Chapter 11 protection.

The company had applied for a reported $10 million in federal payroll assistance, but its request was not approved. Miami Air went into liquidation this month after 29 years of service, a move that affected 350 of its workers.

Australia's No. 2 carrier sought bankruptcy protection on 22 April after failing to secure a $888-million bailout. The company entered voluntary administration (a practice similar to Chapter 11 protection) as it struggled to repay a $7-billion debt after several loss-making years.

Virgin Australia, which grounded all of its international flights and all but one of its domestic routes over the past two months, said it would continue to operate some flights to "transport essential workers, maintain important freight corridors, and return Australians home".

Lufthansa decided to shut down its low-coast airline, which operated under the Eurowings brand, in early April as part of its cost-cutting efforts.

Germanwings came under pressure just like the entire low-cost sector, and was reeling from the 2015 tragedy in which a pilot who had been treated for suicidal tendencies deliberately crashed a plane into the Alps, killing all 150 people on board.

The largest regional Alaskan carrier suspended all flights and filed for Chapter 11 bankruptcy protection on 5 April.

The airline said it had lost 90 percent of passenger revenue because of travelling concerns, with its debt rising to $90 million. It now plans to sell all or most of its assets by 17 June.

The Minnesota-based carrier, owned by Trans State Holdings, failed to find new partners in light of the crisis and also shut down all operations on 5 April.

The airline had flown regional routes for the heavily-indebted American Airlines, which moved to reduce service and cut contracts with smaller carriers to stay afloat.

Trans State Airlines, another subsidiary of Trans State Holdings and a United Express operator, ceased operations just four days before Compass and became the first US airline casualty of the COVID-19 crisis.

The Missouri-headquartered company had already had plans to fold by the year-end due to consolidation and a pilot shortage, but the pandemic sped up that process.

Air Mauritius announced on 22 April that it was entering into voluntary administration.

The flag carrier airline of Mauritius grounded all international and domestic flights and became unable to meet its financial obligations as a result.

The UK's and Europe's largest regional airline collapsed on 5 March, just two months after reaching a rescue deal with the government that deferred its $130-million air passenger duty.

Flybe had run more than a third of all domestic flights in the UK and flown a quarter of all domestic passengers. Despite its significant market share, the company had posted losses for much of the past decade. The airline has grounded all flights and ceased all operations.

000000
Popular comments
I would have hoped South West Airlines goes down, it has the most appalling customer service and dim witted pilots, anyone recall the lady sucked out of the window after a loose engine cover was ignored by the arrogant pilot.
professor.hornblow
28 May 2020, 16:38 GMT1
000000
professor.hornblow, it's pretty much the same for all mayor US airlines, including Delta, AA and United. Although I agree that SWA is much more similar to a third world country air company than a developed world one. but hey, those 737s got cool colors.
honcho_pilot
28 May 2020, 20:07 GMT1
000000
Newsfeed
0
New firstOld first
loader
LIVE
Заголовок открываемого материала
Access to the chat has been blocked for violating the rules . You will be able to participate again through:∞. If you do not agree with the blocking, please use the feedback form
The discussion is closed. You can participate in the discussion within 24 hours after the publication of the article.
To participate in the discussion
log in or register
loader
Chats
Заголовок открываемого материала
Worldwide
InternationalEnglishEnglishMundoEspañolSpanish
Europe
DeutschlandDeutschGermanFranceFrançaisFrenchΕλλάδαΕλληνικάGreekItaliaItalianoItalianČeská republikaČeštinaCzechPolskaPolskiPolishСрбиjаСрпскиSerbianLatvijaLatviešuLatvianLietuvaLietuviųLithuanianMoldovaMoldoveneascăMoldavianБеларусьБеларускiBelarusian
Transcaucasia
ԱրմենիաՀայերենArmenianАҧсныАҧсышәалаAbkhazХуссар ИрыстонИронауОssetianსაქართველოქართულიGeorgianAzərbaycanАzərbaycancaAzerbaijani
Middle East
Sputnik عربيArabicArabicTürkiyeTürkçeTurkishSputnik ایرانPersianPersianSputnik افغانستانDariDari
Central Asia
ҚазақстанҚазақ тіліKazakhКыргызстанКыргызчаKyrgyzOʻzbekistonЎзбекчаUzbekТоҷикистонТоҷикӣTajik
East & Southeast Asia
Việt NamTiếng ViệtVietnamese日本日本語Japanese俄罗斯卫星通讯社中文（简体）Chinese (simplified)俄罗斯卫星通讯社中文（繁体）Chinese (traditional)
South America
BrasilPortuguêsPortuguese
NewsfeedBreaking
03:15 GMTUnited Russia Party Wins State Duma Elections With 49.82% of Votes
02:55 GMT911 Call Reveals Boyfriend Was Seen 'Slapping' Petito Two Weeks Before Her Disappearance - Report
02:31 GMTBiden Reaffirms Strong US-UN Partnership at Meeting With Guterres
02:22 GMTIndia Cuts Off Communications, Internet in Kashmir Due to Terrorists, Reports Say
02:12 GMTMember of CIA Chief’s Team Affected by ‘Havana Syndrome’ During Work Trip to India, Report Says
01:22 GMTClimate Change-Driven Cyclones Could be Regular Sights in Europe in 30-50 Years, Meteorologist Warns
01:02 GMT‘License to Murder Children?’ Psaki Panned for Bringing Up Biden’s Losses in Kabul Strike Answer
00:38 GMTMilley Told Admiral to Halt Operations in Pacific That China Could Deem 'Provocative', Authors Claim
00:11 GMTPremier League Goals of the Weekend
YesterdayMali Looks for ‘Plan B’ to ‘Bolster Our National Defense’ As French Mission Exits, Leaving Chaos
YesterdayGlobal Pandemic Caused Significant Surge in Demand For Black Bridal Dressers, Fashion Experts Say
YesterdayCoronavirus Death Toll Surpasses 1918 Influenza to Become Deadliest Pandemic in US History
YesterdayIran's New Defense Minister Says Enemies Will Get 'Crushing Response' - Report
YesterdayBorrell Expresses Regrets That EU Countries Were Not Invited to Join AUKUS
Yesterday‘Go Back to Mexico’: Shocking Video of US Border Patrol on Horseback Seen Whipping Haitian Refugees
YesterdayCDC Recommends Admitting Afghan Refugees 21 Days After Measles Vaccine, Reports Say
Yesterday26 GOP Governors Demand Meeting With Biden Amid Deepening Frustration Over Border Crisis
YesterdayDiscovery of Bats With Close Sars-CoV-2 Relative Add More Evidence to Natural Origins of COVID-19
YesterdayFull Harvest Moon Lights Up Sky Over Buenos Aires
Yesterday‘I Got Chills’: Travel Blogger Finds Video of Gaby Petito’s Van