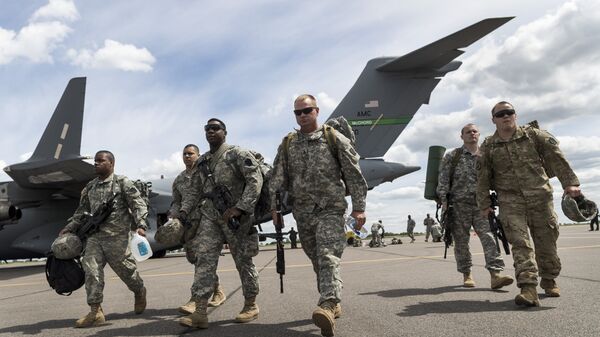 The US Army said on Thursday it was sending a company-sized “advisory team” to Colombia after US President Donald Trump announced an expansion of counternarcotics operations in the region.

“In Colombia, the team will work with host units in areas designated by the Colombian government as ‘priority areas,’ where they will focus on logistics, services and intelligence capabilities directly supporting US-Colombia counternarcotics collaboration and information sharing,” SOUTHCOM added.

The soldiers are part of the 1st Security Force Assistance Brigade (SFAB), a unit formed in 2018 and based in Fort Benning, Georgia. According to the release, this is the first SFAB deployment in Latin America, which was scheduled for March but interrupted by the onset of the COVID-19 pandemic.

In early April, Trump announced the US was launching an “enhanced counter-narcotics operation in the Western Hemisphere to protect the American people from the deadly scourge of illegal narcotics,” claiming that drug cartels were looking to “exploit the pandemic to threaten American lives.”

Additional patrols by US Coast Guard cutters as well as US Navy maritime patrol aircraft were soon spotted in the area, but especially off the coast of Colombia and Venezuela, the latter of which saw senior members of its government indicted by a US court on “narco-terrorism” charges just a week before Trump’s announcement.

Washington has long accused the Venezuelan government of providing covert support for leftist guerrilla groups in Colombia, including the Revolutionary Armed Forces of Colombia (FARC) and National Liberation Army (ELN), which are connected to the cultivation and trafficking of coca, used for making cocaine.

The Colombian government, a close US ally, has been locked in a struggle against such groups in the country’s hilly hinterland for decades. A fragile truce was reacted in 2016 but soon fell apart when the incoming administration of Ivan Duque, Colombia's current president, showed no interest in abiding by the agreement. FARC had sought to transition farmers away from growing the plant under the peace agreement, Sputnik reported, but has now returned to armed struggle amid increased intransigence from Bogota.

Colombia most recently served as a base of operations for a botched invasion and kidnapping attempt against Venezuelan President Nicolas Maduro by mercenaries, including American contractors, earlier this month. The US has denied involvement in the operation, which was officially contracted by Venezuelan opposition figure Juan Guaido, but higher-ups in the Silvercorp security contracting company have said the contract gave the appearance of being a State Department job.