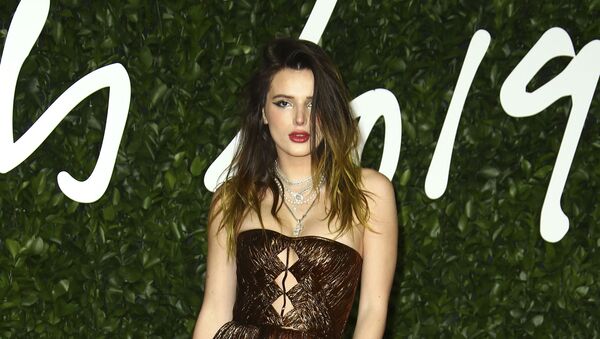 The upcoming series Paradise City, a spinoff of the 2017 movie American Satan, is expected to pay tribute to the spirit of LA, full of ups and downs among those striving to rise to fame in the music industry.

“It really gives you an inside scoop as to what this world of Hollywood looks like that’s so fun to imagine,” said Thorne who plays a member of the music band Lily Mayflower.

LILY MAYFLOWER🔑 @paradisecity It’s a TV SHOW Link in my bio 1:44 to watch full trailer Ps. Yes I do all my own makeup

Earlier the 22-year old actress teased her fans by posting screenshots from the show featuring her during a lesbian make-out session, while surrounded by several barely naked gals. However, it’s unclear whether the photo relates to the scene Thorne talked about during her interview.

Talking to the outlet, the former childhood celebrity also extensively touched upon her controversial image as an actress which resulted from her growing up in the public eye, starring in Disney’s Shake It Up.

“People always hate on the Disney stars because they’re like, ‘Oh, you have this clean image and you’re so young and now you want to be sexy’,” Thorne shared.

Viral
Former Disney Star Bella Thorne Marks 'Hard Times' With Braless Instagram Giveaway
“I am the definition of a misunderstood b***h in this industry,” the Florida-born diva added. “People think of me as this young party girl who’s like, 'I’m just going to do this and do that because I want to and I don’t give a f**k.' And I’m always like, 'I’m sorry guys. When did I say I don’t give a f**k? I literally do give a f**k'.”