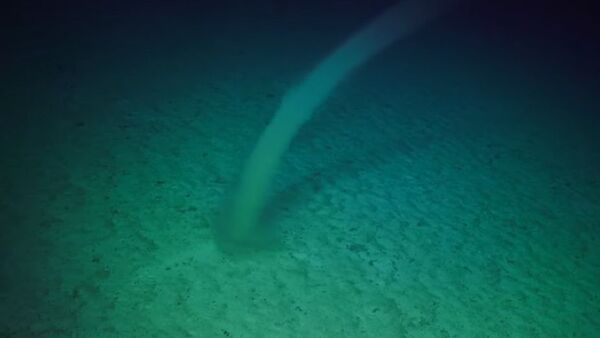 Can tornados really emerge underwater, close to the seabed? Apparently they can, according to explorers from a recent remote expedition near Australia’s barrier reef who came across an unusual phenomenon, sparking questions about the origin of this spectacular sighting.

Researchers from Schmidt Ocean Institute who have been observing Moore Reef, next to Australia’s Queensland, discovered something resembling an “underwater tornado” during a live streamed expedition on 22 May.

According to the conversation between researchers that was captured on the video and later shared by the institute on YouTube, they were no less surprised by the mysterious occurrence than their viewers, believing at first that it was their own equipment that was creating the swirl.

“Wait, is that a tornado?”, one of the researchers is heard as saying when spotting the tornado, as she bursts into laughter. “It’s like a water spell we’ve created on the seafloor”.

But then the scientist comes to the conclusion that the vortex was naturally occurring.

“It’s not us at all”, she says with surprise. “That’s amazing. It’s like it’s created an underwater tornado, I’ve never seen that before”.

Dr Robin Beaman, Australian marine geologist who was also commenting on the live stream, dubbed the phenomenon a “benthic tornado”, similar to a so-called “benthic storm”, and compared it to the “devil winds” that are common to his country’s nature.

“Whatever you want to call them, they're even created in fire with huge amounts of air just lifting up and they can really tear up the land”, Beaman explains. “I have never seen this on the ocean”.

Schmidt Ocean Institute later commented on the unusual finding, suggesting that it was caused by “vertical ROV thrusters moving the current direction” and was therefore not natural. Nevertheless, the institute still expressed excitement with the fact that so little is known about what lies beneath the ocean.

After collaboration we determined this was caused by vertical ROV thrusters moving the current direction - an example of how little we know about the seafloor. Another dive on never before seen reefs will be streamed today - you never know what we will see https://t.co/9OXRuBIMte pic.twitter.com/tSEdxf5j4C