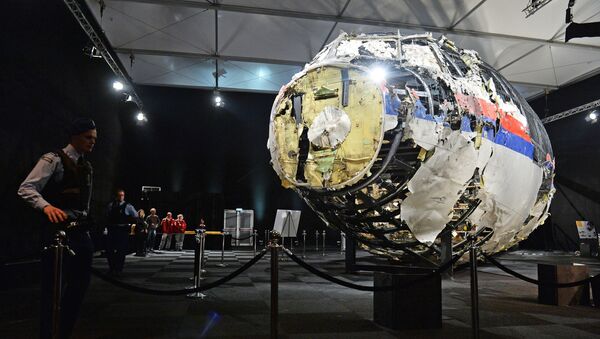 MOSCOW (Sputnik) - Moscow hopes that judges in the Netherlands will pay attention to the drawbacks of the probe into the deadly crash of the MH17 flight in eastern Ukraine — including the failure to properly study Ukraine's role — and order additional inspections.

"The international investigation rushed to transfer materials to court without even completing the probe. The first hearings were held in March, they were procedural by nature. We hope that judges will pay attention to the drawbacks of investigators' work, thoroughly countercheck proofs provided by them, and order additional  expert examinations," the head of the Russian Foreign Ministry's First European Department, Aleksey Paramonov, has said in an interview.

He slammed the probe by the Dutch-led Joint Investigation Team (JIT) as "politicized, biased and one-sided," noting that the JIT was showing a selective approach, trying to prove Russia's alleged involvement.

Paramonov also accused the JIT of failing to properly investigate Ukraine's role in the deadly 2014 crash, which claimed almost 300 lives.

"We have repeatedly expressed our surprise with the fact that materials, which we provide, are either ignored or declared falsified. At the same time, materials from questionable sources were adduced without any questions, including materials provided by Ukraine, which is certainly an interested party. No proper investigation has been conducted into Ukraine's role in the MH17 flight crash due to Ukrainian authorities' failure to close the air space for civilian planes flights over the zone of armed conflict," Paramonov added.

Despite not being a party to litigation, Russia closely follows how the rights of Russian defendants are respected, the diplomat noted.

Identity of MH17 Case Witness Stripped of Anonymity to Not Be Disclosed - Dutch Court
Russia attaches great importance to the trilateral consultations with Australia and the Netherlands, and believes that talks will continue, the Foreign Ministry official stressed.

"I am sure that work in this format will continue. We attach great importance to these consultations and hope they will enable us to better explain to the Australian and Dutch sides our view of what happened with the MH17 flight," Paramonov added.

The hearings in the MH17 crash case will resume on 8 June in the Dutch Schiphol Judicial Complex not far from Amsterdam. Russian nationals Igor Girkin, Sergey Dubinsky and Oleg Pulatov, and Ukrainian national Leonid Kharchenko are defendants in the case.

The Russian Defence Ministry has said that in 2011, the Russian authorities disposed of all the missiles from the series that included the missile whose engine the JIT demonstrated as an evidence to prove Russia's involvement in the downing of the plane.