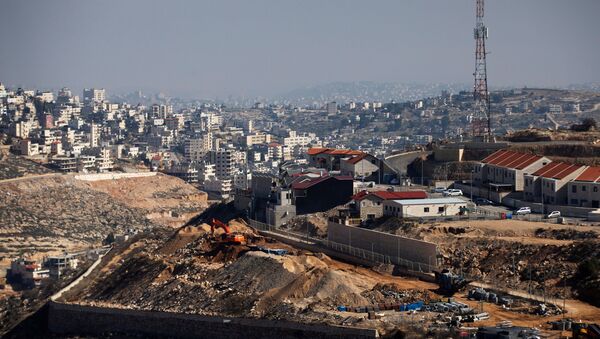 The conditions in the West Bank and Gaza are not ripe for the eruption of violent protests, says a Gaza-based expert, especially given the threat of COVID-19. But as the date for the sovereignty vote nears, Palestinians are likely to respond to Tel Aviv's plans with lone wolf attacks and demonstrations.

As the date for the sovereignty vote nears, Palestinians are likely to respond to Tel Aviv's plans with lone wolf attacks and demonstrations.

In recent days, Hamas, the Islamic group that controls the Gaza Strip, has issued several warnings stating that if Israel goes ahead with its plans to extend its sovereignty over parts of the West Bank, it would not hesitate to use force to prevent that from happening.

Some Hamas officials have even warned that the Israeli intention to bite off some 30 percent of the predominately Palestinian West Bank might trigger the third Intifada, suggesting that blood would be spilled.

Mkhaimer Abu Seada, a Gaza-based political analyst, says it is unlikely that Israel will see popular protests similar in magnitude to the ones that took place in the early 2000s.

"I am not sure the situation is ripe for this. [The uprising] can instead wear the form of different kinds of resistance, like, for example, lone wolf attacks but I doubt there will be suicide bombings or mass shootings".

The so-called lone wolf attacks, or individual assaults on Israeli military personnel and civilians, erupted in 2015, as a result of an increase in the visits made by religious Jews to the Al Aqsa compound, considered the third holiest site for Muslims after Mecca and Medina.

The plateau that houses the Al Aqsa mosque is also holy for Jews who believe it was the place where their second temple was built.

According to Firas Al Dibs, the spokesman of the Jerusalem Islamic Waqf, a religious trust that manages the area, 2015 saw a record number of Jewish visitors entering the compound, angering Palestinians and triggering a series of attacks against Israelis.

Official estimates state that since September 2015 and until 2019, 87 Israelis have been killed in stabbings, shootings and car-ramming attacks. More than 1,500 have been wounded.

"Apart from the lone-wolf attacks Palestinians can also vent their anger at the annexation through mass protests like the ones we saw in 2018. These are cheaper and easier to manage," explained the expert referring to the March of Return rallies that were directed against Israel's blockade of Gaza and against US President Donald Trump's decision to recognize Jerusalem as the unified capital of Israel.

During the two years that these protests have taken place, hundreds of Palestinians have been killed in the West Bank and on the Israel-Gaza border with thousands of others wounded.

However, even if these demonstrations do come back, Abu Seada is doubtful they will be as strong or as violent as they have been in the past.

The primary reason for this, he believes, is the coronavirus. Following the outbreak of the pandemic that has claimed the lives of more than 350,000 people globally, Hamas decided to tighten its grip over the enclave introducing a series of measures, including lockdowns of towns and cities, in a bid to contain the spread of the disease.

The Islamic group has also called rallies and demonstrations off, fearing they would serve a fertile ground for the spread of the virus in an area considered to be one of the most densely populated in the world.

Now with the virus still raging as the coastal enclave announcing more people being diagnosed with COVID-19, it is unlikely Hamas will choose to escalate tensions with the Jewish state, believes Abu Seada.

Quite the opposite is true. The pandemic has only led to a cooperation between the staunch enemies.

In the past, it's been reported that Israel has allowed the shipment of more than a thousand medical examination kits as well as hundreds of hazmat suits into the Gaza Strip, fearing that the spread of the pandemic in the enclave will eventually spill over to Israeli territories. More recently, a team of Gaza doctors have visited Israeli hospitals for training purposes and experts believe this trend will only continue.

Yet, things can still spiral out of control, believes the expert. Two weeks ago, an Israeli soldier was fatally struck by a rock thrown at IDF forces during an arrest operation near the West Bank's city of Jenin, whereas two days ago a Palestinian militant tried to stab policemen in Jerusalem but was shot by the security forces.

Although Israel is now boosting its security presence in Jerusalem and the West Bank in an attempt to prevent other attacks from happening, fears run high that the situation might escalate as the annexation bill looms.

Of particular concern is the lack of security cooperation between Israel and the Palestinian Authority that decided to freeze all military related communication as a result of Israel's sovereignty bill planned to be introduced in July, and the growing number of Palestinians who support an armed struggle.

According to the Palestinian Center for Policy and Survey research, conducted after Trump rolled out his "deal of the century" peace plan that stipulated an annexation of parts of Palestinian lands, 64 percent of respondents said they were supportive of the idea to resort to an armed intifada, a stark increase from last year when 47 percent expressed similar views.

However, for that to happen and to repeat "the success" of the Second Intifada, where all the Palestinian factions were united against Israel, Hamas would need to form a joint front with Fatah that controls the West Bank to send a message to Tel Aviv that they all share a common goal.

Although in recent weeks representatives of the two factions met to discuss measures needed to be taken to stop Israel's plans, no agreement has been reached, with each side remaining "locked" in its position.

"In the past Hamas and Fatah have tried to put their differences aside and cooperate in the face of such challenges as Israel's settlement activity or, more recently, Trump's peace plan that has caused an uproar. But these attempts have largely failed and chances that this time around it will be different are slim too," said Abu Seada.

While Hamas calls on the Palestinians to embrace an armed struggle, scrap the historic Oslo Accords of 1993 that paved the way for the establishment of the Palestinian Authority, Fatah's leader Mahmoud Abbas prefers to put violence aside and rather concentrate on diplomatic means that include international pressure, boycott and sanctions - measures too light for the leadership of the Islamic group.

"Hamas and Fatah don't trust each other. Even more so, they work against one another simply because their visions are so different and I believe that this time too, they will continue to pursue their paths separately".

In 2006 Hamas won legislative elections, and a year later it seized the control over the Gaza Strip, ousting the officials of Fatah. Although over the years a number of attempts have been made to mediate between the two rivals, relations remained sour with both sides slamming each other for their conduct and their policy vis-a-vis Israel.